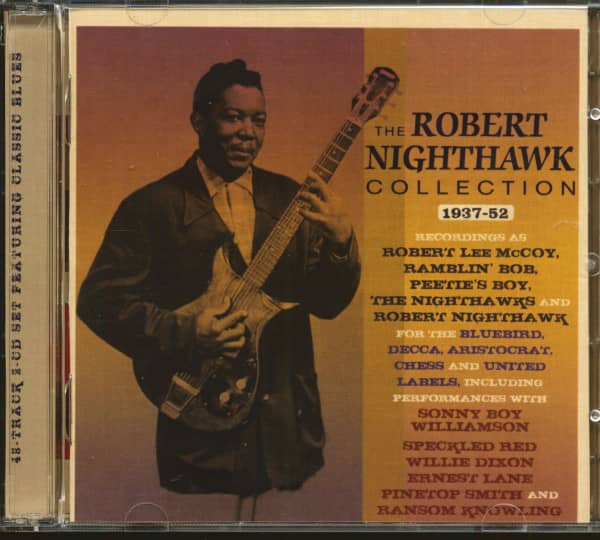 Robert Nighthawk, also known during the early years of his career by the name of Robert Lee McCoy, as well as other pseudonyms like Ramblin' Bob and Peetie's Boy, was a blues slide guitarist, singer and songwriter whose-influence far outweighs the recognition and visibility his recordings have enjoyed in subsequent decades. Born in Arkansas, he was an itinerant musician, working in Memphis and St. Louis, before doing his first recordings for Bluebird in 1937 in Chicago, and continued his rambling lifestyle during what was a fitful recording career over the next fifteen years.

Having recorded initially for Bluebird with SonnrBoy Williamson I (the original "Sonny Boy") as Robert Lee McCoy and Ramblin' Bob, he recorded in 1940 for Decca under the name Peetie's Boy, and during the late '40s for Aristocrat and its later guise as Chess under the name Robert Nighthawk, taking the name from the best-known title from his first sessions "Prowlin' Nighthawk". His final recordings during this era were in 1951 and '52 for the United and States labels. He was rediscovered during the `60s and enjoyed a brief revival before his death in 1967.

This great-value 48-track 2-CD set comprises the main body of his significant recorded output under his own names, with noted performers like Speckled Red, Willie Dixon, Ernest Lane, Pinetop Smith and Ransom Knowling featured on his sessions, and is a showcase for the intense bottleneck style he developed as he made the transition from acoustic to electric guitar which charted the way for the likes of Elmore James and others, for whom he was a significant influence.

Until his disciple Earl Hooker came to prominence, it's unlikely any blues slide guitarist developed a cleaner, lighter, more melodic touch than Robert Nighthawk. He started out recording in the pre-war era as Robert Lee McCoy, but that wasn't his real name either. He was born Robert Lee McCollum (or McCullum) in Helena, Arkansas on November 30, 1909.

Robert got started playing guitar late, at approximately 21. His first instrument was harmonica before his cousin, Houston Stackhouse, tutored him on guitar. But he was a fast learner. Bluebird signed him in 1937; he made his recording debut in Aurora, Illinois, on the same May day as Sonny Boy Williamson. By then, he'd changed his handle to McCoy after fleeing the south following a murky shooting incident that compelled him to take up residence in St. Louis.

One of McCoy's songs that day was called Prowling Night-Hawk, the inspiration for his most enduring alias. There were a couple more Bluebird dates and a 1940 Decca session as Peetie's Boy before the war upended recording activities. Nomadic Robert ended up back in Helena for a time, broadcasting his pungent blues over KFFA for Bright Star Flour in direct competition with the second Sonny Boy Williamson's 'King Biscuit Time' program.

Muddy Waters recommended his old friend Robert, who had by this time gone electric, to Leonard Chess. Nighthawk cut for him in late 1948 and again on July 12, 1949, when the day's itinerary included the chilling Black Angel Blues, pianist Ernest Lane and bassist Willie Dixon providing splendidly sparse accompaniment. The song harked back to 1930 and rough-edged classic blues singer Lucille Bogan (though Nighthawk was probably more familiar with fellow slide master Tampa Red’s 1934 version), and in 1956 B.B. King would score a solid R&B hit with it as Sweet Little Angel. Aristocrat—the label Leonard Chess was associated with prior to his own self-named firm—issued it as by The Nighthawks. The other side, Annie Lee Blues, made a chart dent—Robert's only fleeting moment in the national spotlight. 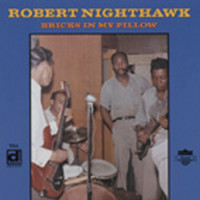 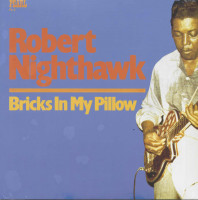