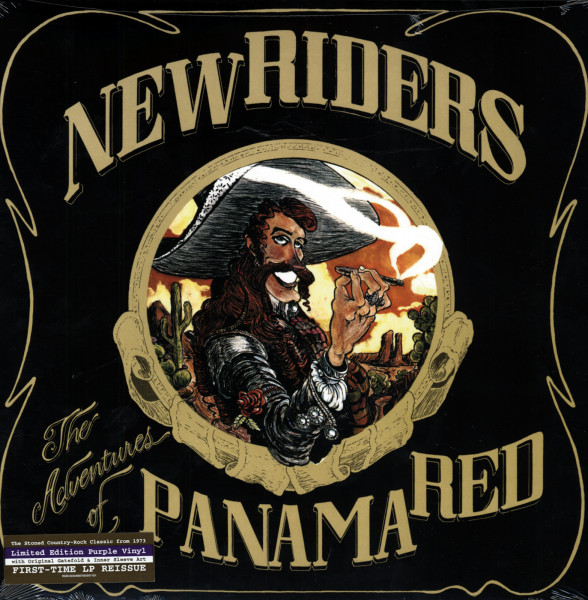 (Real Gone) 11 tracks. If there was ever any doubt that The New Riders of the Purple Sage were the ultimate hippie country rock band-and having had Jerry Garcia, Phil Lesh and Mickey Hart of the Grateful Dead as early members meant that there wasn't much-The Adventures of Panama Red put them to rest. This 1973 album's loosely connected tall tales of drug culture, complete with the album's underground comic book graphics, ensured that this gatefold record was a long-time dorm room favorite for separating out those stems and seeds. But Panama Red (their only gold record) had a lot more going for it than just countercultural kicks-the band, by now consisting of John Dawson, David Nelson, Dave Torbert, pedal steel ace Buddy Cage and Jefferson Airplane drummer Spencer Dryden-was much tighter than any outfit this stoned had a right to be, and with songwriting contributions from Peter Rowan (the hit 'Panama Red' and 'Lonesome L.A. Cowboy') and Robert Hunter ('Kick in the Head') as well as from the band's own fine tunesmiths in Dawson and Torbert, the songs were of a uniformly high quality. Production by multiinstrumentalist Norbert Putnam, charts by the Memphis Horns and vocal contributions by Buffy Sainte-Marie and Donna Godchaux helped enshrine this record as one of the finest country-rock outings of the '70s. Now, Real Gone Music is reissuing this classic album for the first time on vinyl, remastered by Vic Anesini at Battery Studios in NYC and lacquer cut by Kevin Gray, with a limited edition pressing of 1000 in-what else?-purple vinyl, with the original gatefold album and inner sleeve graphics (with lyrics) intact. Time to add to your stash of essential '70s vinyl!
Limited Edition, Gatefold LP Jacket, Purple Vinyl

New Riders Of The Purple Sage

Nashville session man, studio owner, and producer Norbert Putnam had a loose affiliation with Columbia Records that saw him handle Dan Fogelberg's first record (see our previous volume) and then, bizarrely, NRPS. He went to the Bay Area to meet them, and it proved to be an epic cross-cultural collision. Picked up by a hippie driving a VW bus, he was taken out to the band's communal space. "It was up on the hill in the middle of a wheat field," Putman said later. "The women are walking around wearing muumuus and the kids are running around naked, and here I am, this clean-cut guy from Nashville walking into all this." Marmaduke Dawson took Putnam and the rest of the band out for a communal gathering in the wheat field. "The wheat is so high I can only see people's heads," he said. "I had this speech ready where I was gonna tell them it wasn't going to work. I put my hand up to make a gesture and a butterfly lands on it. The band sees this. They stare at it. No one says a word. Then Marmaduke says, 'That's an omen, man. You're our producer. You've been chosen.' I think to myself, 'You've gotta play the cards you're dealt.'" Putnam called it a good take if Spencer Dryden didn't drop his drumsticks, but they emerged from the Record Plant in nearby Sausalito after four weeks with NRPS's best-selling album, 'The Adventures Of Panama Red.'

Putnam aside, there was another Nashville connection in Peter Rowan. A former Bill Monroe sideman, Rowan had moved out west to become involved with Seatrain, Earth Opera, and other groups of the moment. He wrote the LP's title song as well as Lonesome L.A. Cowboy. In October '73, Rowan recorded this song live when he was with Old and in the Way alongside Jerry Garcia, Vassar Clements, David Grisman, and John Kahn.