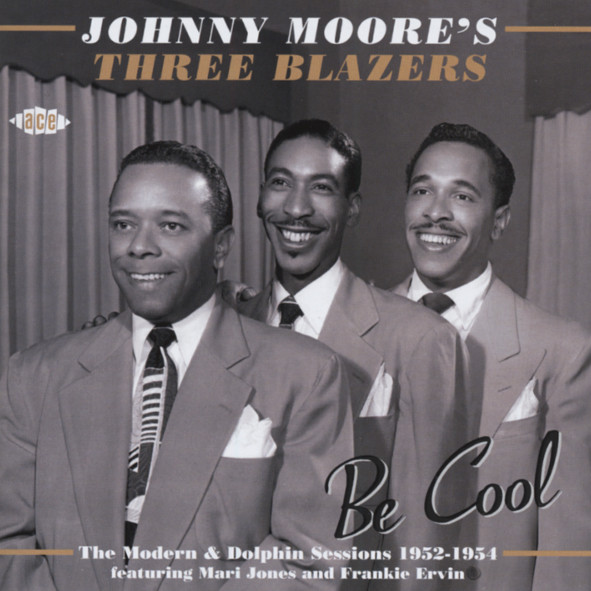 Like his younger brother Oscar, who held down the guitar chair with Nat King Cole's trio, Johnny Moore was a subtly sensational guitarist. His jazzy licks highlighted the cosmopolitan appeal of The Three Blazers, seminal pioneers of the influential 'cocktail blues' style that swept the West Coast in the mid-to-late '40s. This sophisticated brand of blues was ideal for sipping cool libations in late night bars, a world removed from rough-edged southern blues. The most important factor of all in the trio's yearning Drifting Blues sailing to #2 R&B in 1946 was the mellow vocal approach of Blazers pianist Charles Brown, imparting a romantic air.

Born October 20, 1906, Texas native Moore learned how to play guitar while growing up in Phoenix. He assembled the first edition of the Blazers in L.A. with bassist Eddie Williams and pianist Garland Finney. When the piano chair opened up, Moore sought out the classically trained Brown, who had arrived from Texas in 1943 and won an amateur contest soon thereafter at the Lincoln Theater on Central Avenue (Johnny and Eddie were in the audience).

"Here comes Johnny Moore and Eddie Williams looking for me," said the late Brown. "They didn't know where I lived, but they went to every house, they told me. So they went to this lady's house next door to where I was staying, and they asked her, 'Do you know a Charles Brown?' She said, 'Charles Brown? Who is that?' Said, 'Well, he plays the piano, and he's living out here somewhere.'

"She said, 'Well, I heard a piano next door, playing every day over there. Maybe he lives over there.' And sure enough, that's where I lived. So they came over there looking for me,"  he said. "They were interested in having me play with them if I wanted to." Brown, born in Texas City, Texas, on September 13, 1922, scaled back his two-fisted technique to fit in. "They said, 'Well, you play well, but with a trio, you have to tie that left hand behind you and play the right hand. I'll have to groom you that when I'm soloing, you comp behind me, and when you're soloing, I'll comp behind you.' And Eddie Williams played a 2/4 bass, like the country and western, instead of a bottom."

Talent scout Sammy Goldberg brought Eddie Mesner into the Copa Club late one night to see the Blazers. Mesner pacted the Blazers to his fledgling Philo label (its name was soon changed to Aladdin). At their first Philo date on September 11, 1945 at Radio Recorders with Johnny Otis added on drums, the group cut Drifting Blues, its authorship credited to all three Blazers though Charles had written it long ago

"'Drifting Blues' is when I was young. My grandmother and them used to go to choir rehearsal, and we'd slip out. They thought we were in bed, and we'd slip out and listen to these places on the avenue up there—Sixth Street honky-tonks, where my uncle Johnny played sometimes, 'cause he was a guitarist. So we heard these lilting sounds," he said. "When my grandmother would leave, we would try to do some of the things we heard. So that's how 'Drifting Blues' came about—the words from some of the people that we heard singing these words. Then I had a chance to put my words to some of the things I thought they were singing. When we did 'Drifting Blues,' we didn't know it was gonna be a hit. But we knew it was different."