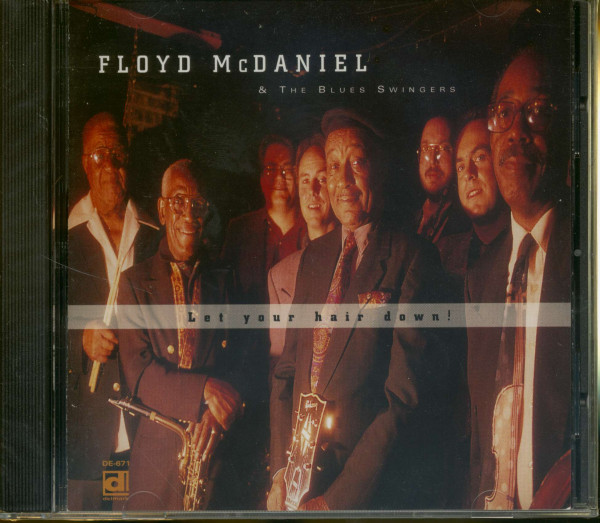 Floyd McDaniel & The Blues Swingers: Let Your Hair Down

Guitarist/ vocalist Floyd McDaniel has been playing for over half a century in an urban hipster's world of jump and jive, of rug cutters, geets and flivvers, all cited in the lyrics of his recordings. Its resources are T-Bone Walker - influenced blues, jazz of every variety with a Charlie Christian shadow, hokum, stage evues, wasboard bands, a long run with the Ink Spots and success in the 1940s and 1950 with the Blazes on United Records. Recently he's been involved with the Blues Swingers, a hard - swinging R&B band led by tenor saxist/arranger Dave Clark with four horns up front and a rhythm section kicked by veteran drummers Kansas Fields (records with Bechet, Mezzrow, BG, Condon, Byas, Bird, etc.) or Hindu Hendersen, a startling if belated discovery. Floyds played the Michigan Ave. bridge, mob joints, the Cotton Club, the '33 World's Fair, the Apollo and now - your CD player.

The musical world of guitarist and vocalist T Floyd McDaniel has been spinning for over a half century and shows no signs of a slowdown. Its an urban hipster's world of jump and jive, and of Nature Boy and rug cutters, geets and flivvers, all cited in the lyrics of his record-ings over the years. Its resources are T-Bone Walker-influenced blues, jazz of many varieties with a Charlie Christian shadow, hokum, stage revues, washboard bands, an extended run with the Ink Spots and pop success in the 1940s and 1950s with the Blazes on some Chicago labels venerated by collectors. For the last few years its revolved around the Blues Swingers, a vintage R&B revivalist band led by tenor sexist and arranger Dave Clark and fronted by four horns to showcase Floyd's continuing mastery and versatility. That association has been more brave than lucrative when the generic blues club act is a small, high energy combo with more funk than jazz sensibil-ity. But perseverance and polish are starting to pay off. Word is spreading, bookings are gradually increasing and now you're holding Floyd's first full album, probably with amazement that it's taken so long. At an age when most musicians are slowing down or settling for passes through the scrapbook, Floyd's world is still expanding and experiencing Indian Summer. It has been a long career full of detours and changes of direction.

Floyd was born in Athens, Alabama on July 21, 1915 and moved to Chicago around age fifteen, where he attended the renowned musical wellspring, Wendell Phillips High School. 'Guitar's been around me all my life,' he recollects, with many players in the family. He and some friends started playing on Chicago street corners like Roosevelt & Kedzie and the Michigan Avenue bridge, passing the hat and playing Louis Armstrong and Mills Brothers favorites. That led to gigs at the 1933 World's Fair and a tour with a washboard band called the Rhythm Rascals including a month in Detroit, and local work at the Spanish Club at Roosevelt and Mannheim. Its owner Doc Stacy set the band up in New York, where they were spotted at the Apollo Theatre and settled into a long residency at the Cotton Club as the Cotton Club Tramp Band. 'We was showstoppers, man,' Floyd recalls, playing in a show called 'Harlem Goes Broadway, Broadway Goes Harlem" and doing summer tours with a package headed by Cab Calloway. Floyd acquired the nick-name 'Butter' because of his chubbiness from Ben Webster and Billie Holiday.

During the third year of the New York residency Floyd took the bus back to Chicago to see his family. He ended up joining Lindsley ("Jelly') Holt and the Four Blazes, replacing guitarist Jimmy Bennett; William Hill was the other guitar player. 'In six months time, we was right back on Broadway... we climbed right up the ladder, man." Floyd's tenure with the Blazes began in 1941 and lasted into the mid-fifties in various sizes and combinations. The group played their own material plus songs by the Ink Spots, Mills Brothers, Basie and 'all the popular tunes." Floyd remembers a lot of work back east and in the gambling center of Covington, Kentucky. Also in 1941 Floyd went electric. He had met pioneer amplified guitarist Charlie Christian in New York when Christian joined Benny Goodman's band, and Christian 'was my idol... I thought he was the cat's pajamas, man." Floyd also acquired chord knowl-edge from Ray Nance's guitarist Claude Adams and single note skills from John Collins during after hours jams in Chicago on 55th Street. The foundation for Floyd's blues style comes form T-Bone Walker: 'That's the guy that taught me the blues.' After Floyd married his second wife Margaret Dixon, he found out that her sister and T-Bone had collaborated on a dance act in Texas, and that their mother 'almost raised T-Bone.' The friendship between the two guitarists deepened as a result and is still reflected strongly in Floyd's music, as almost every track on this album shows. In 1947 the Five Blazes (with pianist Ernie Harper) recorded four songs for Aristocrat including 'All My Beets Are Gone,' also waxed by Jimmy Witherspoon. Bassist Prentice Butler died and was replaced by Thomas Braden, who was a major force as the group became a mainstay of United Records with their 1952-53 sessions.

Braden wrote and sang their biggest hits, the upbeat blues 'Mary Jo° and "Raggedy Ride' (both updated on this CD) and a number of other songs. The piano was replaced with horn work for the United outings, which also included a vocal version of 'Night Train.' Floyd has fond memories of those days, working on Howard Street at the northern edge of Chicago and jamming regularly in the back car of the El on the early morning ride home with the likes of the Big 3 Trio and Joe Williams, working the same strip. "The front car would be empty, man; everybody would go to the back where the musicians were.' Eventually bookings fell off. The band went to Texas, William Hill stayed and some of the others including Holt formed The Whims. In 1957 Floyd bought a tavern at 155 W. 75th Street, running it for seven years. He stayed close to home but did go to Des Moines with Jump Jackson's band to back Sam Cooke. Then he joined a rock group ('they called me Pops") called the Y Knots, doing the likes of James Brown and Otis Redding tunes in the company of drummer Vince Chappelle and bassist Larry Exum, both well known to blues lovers. From there he went on in 1971 to one of the versions of the Ink Spots, with whom he stayed into the late '80s. At the 1986 Chicago Blues Festival he was a part of a Big 3 Trio reunion with Willie Dixon and pianist Baby Don Gaston; the experience rekindled Floyd's desire to be a blues man.

He hooked up with tenor man Dave Clark, who had formerly recorded as a guitarist with Hip Linkchain and was trying to keep alive the magnificent R&B horn arrangements of stalwarts like Maxwell Davis. It was a natural match and keeps getting even better. Floyd has also found time to tour Europe, recording there with Little Willie Littlefield for the German CMA label and guesting on some '93 session, with Austria's Mojo Blues Band. This album shows how well Floyd and the Blues Swingers bring out the best in each other. Floyd has never had such fully orchestrated accompaniment in the studio or as broad a forum for his talents, and the band had a rare chance to perpetuate what is too close to becoming a lost art in Chicago. The enthusiastic reception given to the Dallas revival of Zuzu Bailin (who was overjoyed with the Blues Swingers' backing at the 1990 Chicago Blues Festival) should find an attractive new focus in Floyd and band; the same respect for tradition and quality are evident, and Floyd goes back even farther and ranges wider than Zuzu and has kept his chops up into his seventh decade as a professional musician.

The album is generous in its display of Floyd's eclecticism and gifts, the solo space allotted all the front liners and the seventeen song program. The Four Blazes' glory days on United (the masters of which are on the 1995 Delmark release 4678) are recalled through "Raggedy Ride" and "Mary Jo." Fl?yd's propensity for blues ballads comes through via T-Bone's "Blue M??d,' "I Want A Little Girl," "God Bless The Child" and "Nobody Knows You When You're Down And Out." "Strange Things Happening," "A.M. Blues", "Let Your Hair Down" (aka "T-Bone Shuffle" with some twists to the arrangement) and "Caldonia" are all prime, seasoned H&B. "Beale St. Baby" and "Why's Life Got To Be This Way" are swaggering shuffles from the pen of Dave Clark. Floyd's own slow blues "West Side Baby" builds on the Walker motif. The remainder of the tracks are a pastiche of blues, swing, pop and novelty material spanning most of the century. The emphasis is on concise musical expression rather than overstatement. Floyd's full, sophisticated chording takes full advantage of the Gibson Super 400 guitar he acquired in 1953 (he thinks it's a '50 model) and along with traces of his influences, his sense of melody and note choices outside the blues scale are utilized to good effect.

The ensemble boots things along nicely, whether it's driven by the crisp, idiomatic horn charts, astute solo interludes or a rhythm section that plays with the kind of judiciousness and familiarity that come only from a lifetime of on-the-job training. Perhaps the payback for the years together of woodshedding and once-a-month off night gigs is finally imminent, thanks to patience, determination and this fine studio debut. May it lead to more good things; meanwhile, turn up the volume and celebrate this appealing demonstration that we don't have to turn back the clock to enjoy such vintage sounds!
DICK SHURMAN (THANKS TO STEVE CUSHING FOR HIS INTERVIEW WITH FLOYD ON THE "BLUES BEFORE SUNRISE" RADIO SHOW, WBEZ-FM)

$20.31
Customers also viewed
Let Your Hair Down
Tracklist
McDaniel, Floyd - Let Your Hair Down CD 1
01 Raggedy Ride
02 Blue Moon
03 Mary Jo
04 Strange Things Happening
05 It Don't Mean a Thing (If It Ain't Got That Swing)
06 I Want a Little Girl
07 St Louis Blues
08 God Bless the Child
09 Sent for You Yesterday (And Here You Come Today)
10 RM Blues
11 Christopher Columbus
12 West Side Baby
13 Beale Street Baby
14 Let Your Hair Down
15 Nobody Knows You When You're Down and Out
16 Why's Life Got to Be This Way
17 Caldonia