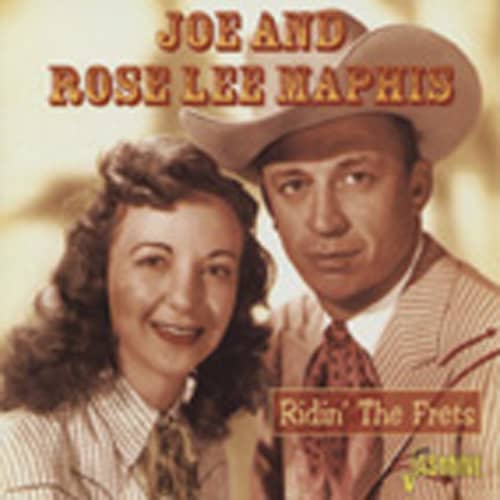 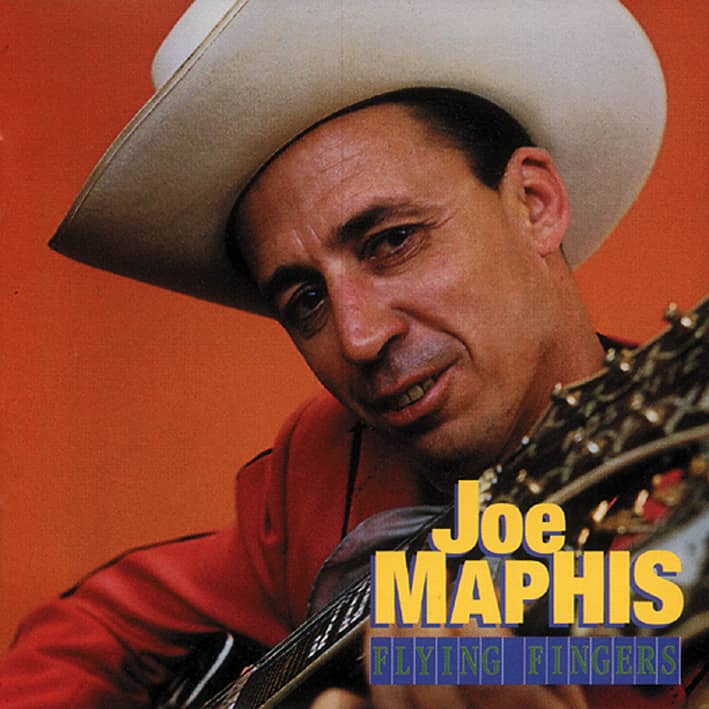 17 year old Joe Maphis hoped for great things when he traveled from his home in Cumberland, Maryland to Fredericksburg, Virginia to audition for Blackie Skiles and the Lazy K Ranch Boys.  Based at WFVA radio there, the six piece band was an oddity.  While the Carter Family, Roy Acuff and other Southeastern acts were hot in Virginia, the Skiles outfit played a mixture of cowboy songs and Western Swing complete with twin fiddles, a thousand miles from that music's core audience in Texas and Oklahoma.

Even after Joe played, the band was skeptical. Desperate to make a good impression, he went for broke, picking up and playing every stringed instrument in the band: fiddles, guitar, banjo and bass.  Impressed, one of the Ranch Boys told Skiles,  "Blackie, we don't need him, but we better hire him.  If we don't, (competing bandleader) Jack Richey's gonna get him."  Joe Maphis became the newest Lazy K Ranch Boy.

Otis Wilson Maphis was country's first flashy guitar-slinger.  Clad in a flashy Nudie suit, a Stetson topping his craggy,  Lincolnesque countenance, Maphis stood onstage, popping off cleanly-picked cascades of notes on his Mosrite doubleneck electric.  Every passage spotlighted his lightning-fast technique, excellent taste and distinct tone.  At times he'd switch to fiddle or banjo in mid-song, earning the nickname ‘King of the Strings’.  He never sold as many records as Chet Atkins or Merle Travis, whether recording for tiny labels like Lariat, MacGregor and Republic or bigger ones like Columbia and Starday. His innovations, however, are beyond question. Most notably, he was among the first, if not the first, guitarists to flatpick fiddle tunes, creating a tradition of flashy guitarists from Jimmy Bryant to Doc Watson, Roy Clark, Albert Lee and beyond.

Maphis's influence has gone even further.  Before James Burton, Joe was Ricky Nelson's first lead guitarist. As a studio musician, he played anonymously on scores of pop and country records, along with film and TV soundtracks.  Joe's musical protégé, rockabilly guitar legend Larry Collins of the Collins Kids, took the deep influence Joe had on him into other areas.  Surf guitarists like Dick Dale have readily acknowledged debts to both Collins and Maphis.  Echoes of Joe's twangy leads can be heard in the enduring work of the late Don Rich on Buck Owens' 1960s classics and even in the more recent work of Richard Bennett.  Though he never read music, he earned respect from schooled Hollywood arrangers who hired him to work on TV and film soundtracks. And he made it look simple.

The town of Suffolk, Virginia, inland from Chesapeake Bay, was his birthplace on May 12, 1921.  When Joe was six, the Maphises moved north to Cumberland, Maryland, nestled in the Allegheny Mountains south of the Pennsylvania line along the Potomac River.  Joe's dad and uncle were both casual musicians, his dad playing guitar, which Joe took up at age eleven.  The boy also played piano in the Railsplitters, a local square dance group that featured his uncle Joe and his dad, and fiddler Ivan Kearns.  They worked throughout the rural region during the Depression, bringing in added money during difficult times.

Still, Joe's guitar obsession grew. His first real guitar idol was an obvious one. "The Carter Family-and especially Maybelle, influenced me a lot," Joe remembered in 1981.   "Her guitar playing was just so pretty, it wasn't long until I was doin' them old things.

"I grew up with these boys, the Brown brothers,"  he continued. "And one of them, Dewain Brown, him and I would spend time with guitars just fooling around when other kids were out playing baseball.  The only thing we had to listen to in the way of lead guitar was, I remember, Riley Puckett.  Riley played some of the first of what us boys then called 'hot hillbilly lead guitar’. There was one record we had of him that we learned to play. It seemed like it was called ‘Frettin' Rag’, though I might be wrong on that title.“Actually, the closest title in Puckett discographies is the 1927 instrumental Fuzzy Rag, recorded for Columbia, probably the record that Joe heard.

Maphis's interest quickly mushroomed beyond guitar and piano as he learned mandolin, five-string banjo, fiddle and bass. "I was just one of those kids who could pick something up and get a tune out of it," he explained.  But guitar was his primary instrument, as he tried something he'd never heard done: transposing melodies of fiddle tunes to single-string guitar lines.

"Ivan Kearns would play a fiddle tune," Joe recalled, "and I would want to pick that so bad, that I would just start pickin' out the melody.  But nobody would pay any attention.  If they did, they'd say, What's that kid doing?  He should be playing rhythm guitar for the fiddle,’ But it seemed whatever Ivan'd play, I'd want to learn, and so did Dewain, We'd both just fool with them old hoe-downs. In Maryland and West Virginia, they square dance faster than they do in some places. So, I would learn to pick in whatever tempo that the fiddler was playing.  In my area, I was sort of a whiz--for a kid."

By the time Joe joined Blackie Skiles in 1938,  he had the flatpicking down. "I remember when I first got the job, they were amazed at this guy even playing lead on a guitar, because it wasn't done in them days."  Skiles and the Ranch Boys worked up a stage routine, based on his audition.  As each member handed Joe their instrument, he played them all. He also bought his first decent guitar: a Martin D-28.  The band didn't stay long in Fredericksburg.  In 1939, they moved to 50,000 watt WRVA in Richmond, where no one cared about  western swing and the group dissolved. Joe joined Sunshine Sue Workman And Her Rangers.  As ‘Cousin Joe’, he was a featured instrumentalist; as ‘Crazy Joe’, he did comedy.  They broadcast over WRVA three times daily: morning, noon, and midnight.

Several hundred miles to the northwest in Cincinnati, guitarist Merle Travis of the WLW ‘Boone County Jamboree’caught the Rangers' midnight show from WRVA.  Joe's playing impressed him, and he soon saw it firsthand. Early in 1942, after losing many male performers to the World War II draft, WLW hired Sunshine Sue and band. In Cincinnati, Joe joined a close-knit group that included Travis and Boone County favorites Hank Penny and Grandpa Jones.  Then, seven months after arriving, the Rangers disbanded.  Joe moved to Chicago and joined the Corn Crackers on the venerable WLS ‘National Barn Dance’ until his draft notice came in 1944.

Trained in ordinance, he made no effort to use his performing experience to join Army Special Services, which handled military entertainment.  When his musical expertise was finally discovered -- on a troopship heading  to the Pacific theater of war -- Joe wound up reassigned to Special Services in Hawaii.  Leading the Swing Billy Revue, he entertained troops throughout the Pacific, including the island of Okinawa, newly occupied by U.S. troops.  Japanese snipers, hiding in the dense foliage, were still killing American soldiers.  As Joe and the group, well aware of the danger, performed for the troops on Okinawa, Japanese snipers were watching, apparently too confused to shoot.

Joe returned to WLS and the ‘National Barn Dance’  after his 1946 discharge, and made his first recording as a sideman on December 12, 1947 in New York, playing guitar behind WLS performer and Decca recording artist Floyd ‘Salty’ Holmes on Mama Blues and John Henry. Joe was soon enroute back to Richmond, where Sunshine Sue and Her Rangers were the flagship act for WRVA's new ‘Old Dominion Barn Dance’. Now playing both a Martin and an amplified Gibson Super 400, Joe rejoined the Rangers and formed his own Korn Krackers with fiddler Buck Ryan, guitarist Jackie Osborne and future Nashville studio guitarist Ray Edenton playing bass.

He also got to know Rose Lee Schetrompf, a Maryland native who sang with Mary Klick in the ‘Old Dominion’  act the Saddle Sweethearts.  They paid each other little mind at first, but gradually became close and began working together by 1951, combining Joe's spirited playing with solo and duet vocals.

Three thousand miles away in California, promoter Bert ‘Foreman’ Phillips, who'd operated western dancehalls around Los Angeles since the early 1940s, acquired six hours of daily TV time over station KECA (now KABC) to start a live TV show called ‘The B-K Ranch’(for Bert and wife, Kay).  Among his earliest hires were Eddie Cletro, Merle Travis and Johnny Bond.  When Phillips asked Travis and Bond to recommend new talent, Merle recommended Joe but added his doubts that Joe and Rosie would leave Richmond. Bond, who had met them on a recent visit to ‘Old Dominion’, knew they were ripe for a move west, and told Phillips so. As Joe recalled in 1981, "Rosie and I left (Richmond) on a Wednesday, and we were on what I call 'assembly-line television' on Monday."  Within weeks, the six hour show, three hours in the morning, three in the afternoon, made them regional celebrities