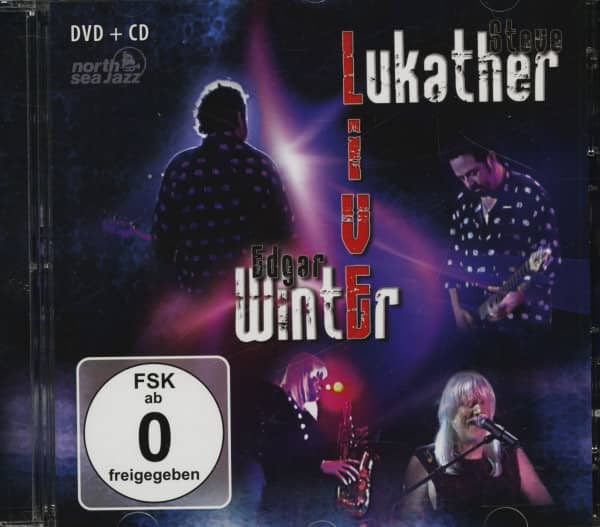 (MIG) 8 tracks, DVD:Sound: PCM Stereo ; Picture:4:3 /NTSC; Country code:0; Running time:67 min.
When these two extraordinary musicians came together on stage at the 2000 North Sea Festival, they already had legendary careers behind them. Steve Lukather began as a studio musician and as a founding member of Toto. His guitar style and influence can be heard on numerous albums by exceptional artists such as Michael Jackson, Eric Clapton, Paul McCartney and Chicago.

Influenced by Jimmy Page and Eric Clapton, Steve Lukather developed a guitar style that paid tribute to both rock and jazz, which he celebrated with such perfection and intensity that his style is still recognizable among a thousand other guitarists today.

Edgar Winter is the younger brother of blues legend Johnny Winter. He has already performed at the Woodstock Festival - and just like Steve Lukather, he fuses rock, blues and jazz. Having already worked with greats like Rick Derringer, David Lee Roth or Ringo Starr, he was well prepared for the encounter with Steve Lukather.

Together with Phil Soussan (bass) and Gary Ferguson (drums), the concert at the North Sea Jazz Festival not only offered a firework of improvisation, but was at the same time an intense demonstration of the skills and perfection of both protagonists. Completely freed from stylistic barriers, this concert is a prime example of the symbiosis of these talents, sprinkled with the best of Winter's songs ("Fly Away," "Frankenstein") and some stunning highlights from Steve Lukather (like his tear-jerking tribute to Toto drummer Jeff Porcaco in "Song For Jeff").

A treat of the concert is the medley of rock'n'roll classics, which once again clearly demonstrates the genius of the two musicians: Their improvisations of the songs "Johnny B Good" and "Whole Lotta Shakin' Going On" are as colorful, fresh and dynamic as one has rarely heard them before. A brilliant, highly musical evening, such as one will hardly ever experience again in this way.