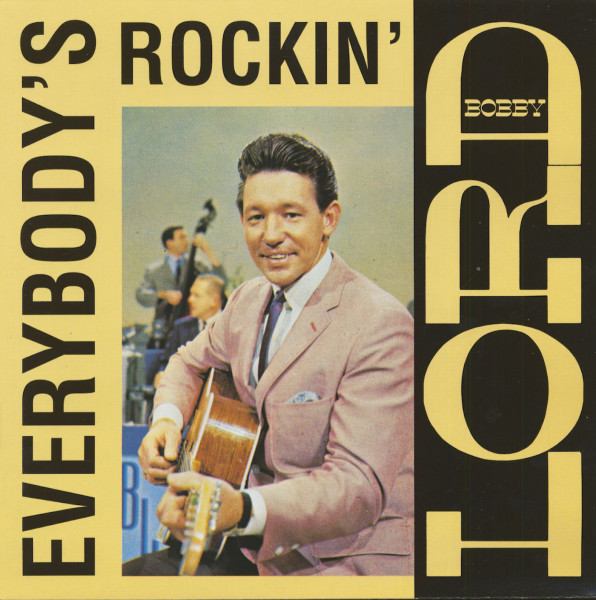 (Demand) 18 tracks, all his 1950s Rockers!
Bobby Lord, born January 6, 1934, Sanford Florida, began his career as a Teenage Jazz singer on Paul Whitemans t.v. show in the early fifties but he turned to country music while he was a student at the university of Tampa, Florida. During the 50s he gained something of a reputation as a cast member of Red Foley's 'Jubilee USA' t.v. show and he made his t.v. mark on the original 'Ozark Jubilee' show on ABC, and became a regular on WSM's famed 'Grand Ole Opry'.
Through the efforts of his good friend Boudleaux Bryant, he was signed to an exclusive recording contract with Columbia Records and some fine country rockers such as 'Everybody's Rocking But Me',a Jack Turner original on Hickory, had been covered in April of '56 also on Columbia by Werly Fairburn but Bobby Lord chose to the song in a more commercial manner a couple of months later and it's hard to believe that such a clean-cut down home country entertainer could once have been the oddball excentric who created such a fine piece as 'No More, No More, No More', once a country bleus original by Monroe Jackson. With the uninhibited scatting that the record producer simply give him a free hand to express himself. The result is marvellous.
After several years with Columbia, Bobby moved to the Hickory label where he enjoyed much success in the country charts and his own television series 'The Bobby Lord Show' which launched the may for more regular visits to the best selling lists on Decca in the sixties.

Everybody's Rockin' But Me 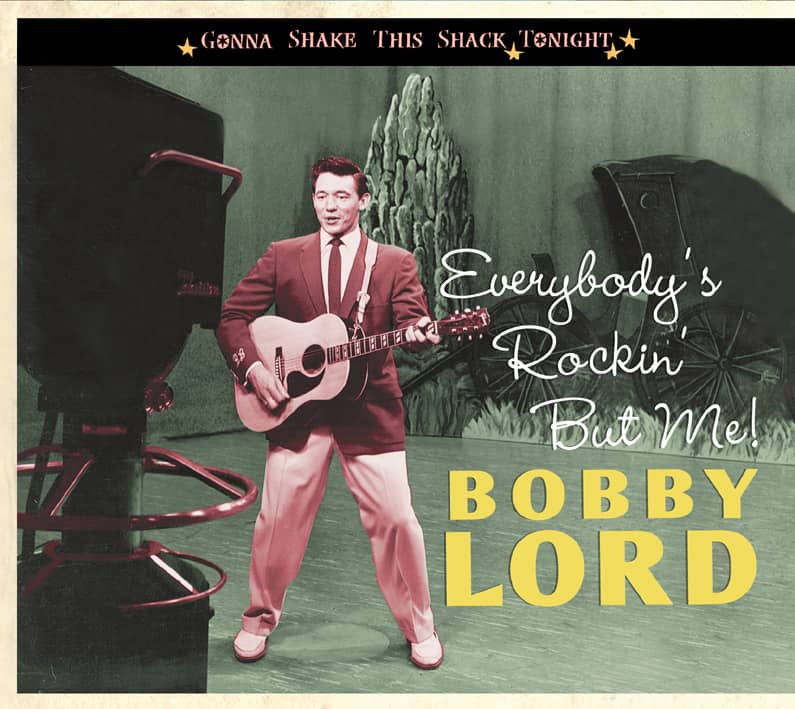 Bobby Lord's career followed unconventional paths with only modest chart achievements, just one single ever reaching the Country Top Ten. His voice evolved over the years, from a tenor so fiery and unbridled it occasionally threatened to careen out of control to a smoother, more controlled delivery. It would be television that made him one of country's most visible country singers the early 50s through the 1960s. At times he followed musical paths putting him at the cutting edge of early rockabilly before embracing a more conventional country sound.

Sanford, Florida, not far from Orlando, was Robert Lee Lord's birthplace. Born there on January 6, 1934, and raised in Tampa, his musical talents were developing by his teenage years. While attending H. B. Plant High School, he sang pop and country locally. Winning a prize for his vocals at the 1951 Florida State Fair led to a trip to Philadelphia to appear on over-the-hill bandleader Paul Whiteman's 'Teen Club' youth talent TV program (Dick Clark was the show's announcer), broadcast over the fledgling ABC TV network.

His regional prominence got a bump from the May, 1953 opening of WSUN TV, Channel 38, in St. Petersburg and the debut of 'Home Folks,' a Friday night WSUN program. Its hosts were Tampa country performers Charlie Arnett and his wife. As 'Old Brother Charlie' and 'Daisy Mae,' the couple were formerly associated with Kentucky's Renfro Valley Barn Dance and had recorded for Mercury. Arnett's preference for local talent drew him to Lord, then a 19 year old University of Tampa freshman hosting a local radio show. A 1953 'St. Petersburg Times' story on 'Home Folks' depicted Lord as a 'bobbysoxer's delight.' As Arnett's health failed, Lord became the show's star both in the studio and onstage. He and the cast, billed as 'Bobby Lord and the Home Folks,' performed before audiences at venues like the Palmetto Trailer Park Auditorium near Sarasota. For pop shows, he fronted 'Bobby Lord and his Orchestra,'

Nashville songwriter Boudleaux Bryant gave a tape of Lord's singing to country producer Don Law at Columbia, who signed him in October 1954. Two numbers recorded at Lord's first session that October reflected different aspects of his talent, one country, the other revealing a clear awareness of the rockabilly rumblings around the South. Backed by a studio band built around Chet Atkins, pianist Papa John Gordy and ex-Drifting Cowboys Don Helms and Jerry Rivers, Lord uncorked hell-for-leather vocals. Occasionally he stretched the boundaries of vocal pitch, as he did on the uptempo Boudleaux-Felice Bryant number Ain't Cha Ever Gonna? Arranged Hank Williams-style, it included tasty filigrees from Atkins. Between its aggressive, driving rhythm and crazed falsetto asides, No More, No More, No More, a song credited to Lord and veteran Florida bluegrasser Andy Boyett, revealed Lord in a nexus between country boogie and rockabilly, even anticipating the concept of psychobilly. The story behind No More, No More, No More is almost Biblically complex, and a deep debt of gratitude is owed to the late Bob Pinson for piecing it together. Andy Boyett worked on Florida stations in the 1930s and 1940s, and sang a song called Colored Boy Blues (Pinson found an acetate of it in Florida dated August 1940). When Boyett, who later worked with Bill Monroe and others, recorded it for Mercury in 1947, the title had become Go Way From My Door and he had become Monroe 'Moe' Jackson. The record fooled a number of blues collectors into thinking it was by a black artist, and it appeared on an early blues anthology LP and in the first edition of 'Blues Records.'Bobby Lord knew the song as Colored Boy Blues, and when he recorded it he co-credited Boyett and called it No More, No More, No More. A review of No More, in the January 1, 1955 'Billboard' characterized Lord's voice as "flexible enough to sing bass or tenor with a solid beat as well."

Session number two, on January, 22 1955, had a similar focus to the previous one. Again, the studio band had Helms, Atkins and Rivers at the core. Carl Smith's drummer Buddy Harman, just breaking into his distinguished career as a session musician, was there to boost the beat. Bryant country tunes dominated, including the trite novelty Pie Peachie Pie Pie and the stronger, more acerbic Sittin' Home Prayin' For Rain. 'Home Folks' went off the air that year. Lord had previously guested on Springfield, Missouri's 'Ozark Jubilee,' a radio show and a weekly ABC TV program hosted by ex-Opry star Red Foley, and got an invitation to join the 'Jubilee' cast. Foley had been impressed by Lord's earlier guest shot.  At the 'Jubilee,' Lord began lifelong friendships there with fellow performers like Porter Wagoner, while filling a role on the program similar to 11 year old Brenda Lee's: attracting younger viewers to a program heavy on traditional country.

Lord's third session was his first at Owen Bradley's new Nashville studio, and the focus was on unvarnished honky tonk. Atkins and singer Eddie Hill handled guitars, with Shot Jackson playing amplified steel, Tommy Vaden fiddling and Marvin Hughes on piano. Lord took on I Can't Do Without Your Love Anymore, written by Douglas Glenn Tubb, nephew of Ernest Tubb (who recorded under that name and later as Glenn Douglas). But Columbia had high hopes for Hawk-Eye, an aggressive Boudleaux Bryant country novelty the label gave to both Lord, who delivered a lusty, rollicking country performance, and pop belter Frankie Laine, backed by an orchestra on his energetic take. Such early stabs at crossover success weren't exactly new, but in 1955, Columbia and several other labels, Mercury, Coral, Decca and King among them, made calculated attempts to have their pop acts score hits with country material. 'Billboard' reporter Paul Ackerman explained the concept in detail, citing Hawk-Eye as one example.

Certain the song would succeed in both country and pop markets, a full-page Columbia ad in 'Billboard's' August 27, 1955 issue hyped both singles, calling Lord's 'the original' and with characteristic hyperbole, noting it was 'soaring on the country best-seller charts' (it wasn't). Both performances were excellent, yet the end result couldn't have satisfied Columbia. Laine's single peaked no higher than the 70s of the pop charts; Lord's never charted at all. Nonetheless, in 1955 he placed #5 'Billboard's' list of 'Most Promising Country and Western Artists.'

Rockabilly was about to explode when Lord returned to Nashville for a January 12, 1956 session. Two days earlier, Elvis, in town for his first RCA session, cut loose on Heartbreak Hotel and four other tunes. Backing Lord at Bradley's studio were Owen Bradley's brother Harold on rhythm guitar, Grady Martin twanging away on lead guitar and Elvis's own rhythm section: bassist Bill Black and drummer D.J. Fontana. The day before, Black and Martin accompanied Johnny Horton on Honky Tonk Man and I'm A One-Woman Man. The instrumental feel of Horton's session carried over to Lord's. His sharp, explosive treatment of So Doggone Lonesome, the Johnny Cash/Tennessee Two single of the moment, contrasted with Cash's darker, restrained vocal. Martin added a more polished spin on Tennessee Two guitarist Luther Perkins's primitive boom-chicka guitar. Black's distinctive bass-slaps were prominent on the Boudleaux-Felice Bryant rocker Beautiful Baby, with Martin's sharp, stinging leads serving as a foil. Dick Goodman's ballad The Fire Of Love took things in a bluesier, more intense direction. The single got no notice, but Lord would revisit this particular number.

Lord toured that summer with members of the 'Jubilee' cast (Foley on some, but not all dates), but in June he came into Nashville for four more numbers, including his sole country Top Ten, Wanda Jackson's Without Your Love (not on this collection) and the B-side, Everybody's Rockin' But Me, a cover of Jack Turner’s Hickory single, recorded a few weeks earlier on April 12. That November, Law (and Grady Martin, who did most of Law's actual Columbia production work) produced four more Lord tunes, including the rocker You Robber You. Teen ballads dominated an April, 1957 session, with Martin and Hank Garland playing guitars, augmented by a vocal group. One ballad, Am I A Fool, was co-written by Lord and wife Mozelle, whom he'd married in 1954. Wayne Walker's I Knew It Was You and Boudleaux's Just Wonderful were in a similar ballad vein. High Voltage, a generic rocker by Dave Burgess, guitarist for the Champs of Tequila fame, was tamer than Lord's previous rock fare. Columbia promoted it to the pop market without success. 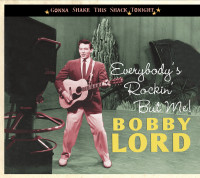