The Lacs: Nothing In Particular II (CD)

This collection of never-heard songs and rare tracks not included on the LACS album is scheduled for release in November of this year. Loud and proud, the LACS have gained a loyal audience over the last ten years.
Their unique Southern sound is well received by their hardcore fans, while they are breaking attendance records on coast-to-coast tours and introducing new fans to their music.

Recognized by such major media as the Rolling Stone, The New York Times and The Wall Street Journal, The LACS continue to lead the country rap genre with over 1 billion streams, five albums in the Billboard charts, over 100 million YouTube views and an RIAA-certified gold single for the groundbreaking song Kickin Up Mud.

Article properties: The Lacs: Nothing In Particular II (CD) 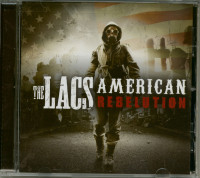