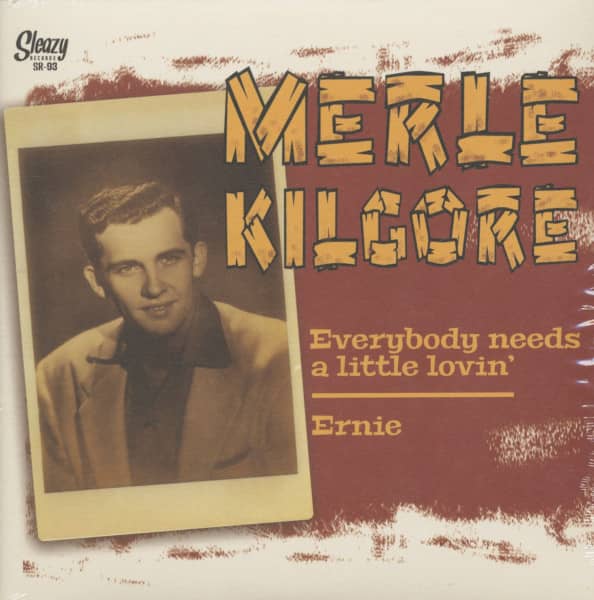 Merle Kilgore was born in Chikaska, Oklahoma but very young moved to Shreveport, Louisiana, where he gave his first musical steps as musician and DJ of the Louisiana Hayride. From his earliest years Merle stood out as a composer, writing with only 18 years the Webb Pierce's big hit More And More. Over the years Merle would pen a never-ending chain of big hits like Johnny Cash's Ring Of Fire, Johnny Horton's Johnny Reb, Tommy Roe's The Folk Singer or the crossover Wolverton Mountain, but also great rockabillies as Bob Luman's Loretta.

In 1954 Merle would sign up for Imperial Records, company with whom he would release his first singles under his own name. Although country & western is the main ingredient at the begginig, soon the rockabilly bug would bite strong into Merle's music and stinky guitars and slappin' doublebass would become familiar in his singles, 'Everybody Needs A Little Lovin''and 'Ernie' , both included here are good examples of it. Interestingly, although Merle would succeed as a composer, these songs are signed by his wife Dorothy Lee Salley, who would also write for him the ballad Trying To Find (Some One Like You). Years later, in his stage with Mercury Records, Merle would record Everybody Needs A Little Lovin' in a much more pop style and re-titled as The Love Bug.

One of his sessions for Imperial took place in New Orleans, backed by Dave Bartolomew's orchestra, with Earl Palmer on drums and Lee Allen on saxophone. Of those sessions the Merle's sound would switch to pure jump blues, with songs like Please, Please, Please, Teenager's Hollyday and Hang Doll.
After his time at Imperial Merle continued recording and composing during the 60's and 70's for companies such as Starday, Mercury, MGM, Epic, reaching the 80's to become the manager of Hank Williams Jr. being by then a very popular name in country music. He is a member of the Nashville Songwriters Hall of Fame. Merle passed away on February 6, 2005 at age of 70.

Merle Kilgore could be forgiven for thinking that he's seen it all. As a h Louisana, with something to prove - and arrive back six years later with noth-ing left to prove, but with ambition supplanted by an emptiness that alcohol eat ( efe: teenager he saw an almost unknown Hank Williams arrive in Shreveport, had filled. Merle saw Elvis Presley mount the same stage two years later with the same searing need to be heard. Later, with Johnny Horton, Merle ex- hor plored the outer limits of spiritualism, only to see his belief turn to apostasy. Me He sat on the tour bus while fans told Hank Williams Jr. that he would never be but a shadow of his daddy - and, working eventually as Jr's manager, saw the son define his own boundaries to become arguably the hottest property in A f country music.

Merle has written, or co-written, over three hundred songs that others have recorded, starting with More And More, and embracing the timeless im-agery of Ring of Fire, and the solid novelty appeal of Wolverton Mountain. He started his recording career as a hillbilly singer, switching to rockabilly and even recording a session with Fats Domino's band, before flirting with ersatz folk, and eventually returning to country music.
Born in Chickasha, Oklahoma on August 9, 1934, Kilgore grew up in Shreveport, Louisiana, and started attending Byrd High School in 1948 - the year that the Louisiana Hayride started on KWKH. He hung around the sta-tion and the grill across the street where the performers whiled away the hours. Merle's heroes were the Bailes Brothers who played daily on KWKH as well as on the Hayride; he carried their guitars up to the studio every morn-ing: "The elevator didn't work 'I'll 7 :00am," recalls Merle, "and some of the shows started at 5 :00am. I' d carry up instruments all morning long."

It was in the grill that Merle met Hank Williams, just arrived from Montgomery with a rumour that he could steal any show: "We'd heard that if he could be sober a year, they'd put him on the Opry. The Bailes Brothers had helped to get him on the Hayride, and on the first night he asked me how they'd done. I said, 'Real good. l' d hate to have to follow them.' He said, 'I'll eat 'em alive' - and he did!" By the time Williams returned in 1952 with his life in tatters, Kilgore was attending Louisiana Tech in Ruston: "I' d come home for Thanksgiving and I walked into the grill and a voice said, 'Hey, Merle, ain't you gonna speak'. It was Hank. He had an old black rumpled suit, hat pulled down and he hadn't shaved in four orfive days."
A few months later, he was dead.

It was another graduate from KWKH, Webb Pierce, who got Merle his first shot at recording. Merle had finished at Louisiana Tech. He was working at American Optical, and as a dee-jay and featured artist on various stations in and around Pierce's home town of Monroe. "This guy came by with a big cigar," said Kilgore, "He'd been listening to me on the radio, and told me he was the biggest pipeliner in the entire South. He said he was building a television station in Monroe, and that I could be the first TV star in north-east Louisiana. I jumped at it. They billed me as the Tall Texan,
"At that time, Webb Pierce was just about the hottest thing in country music. He came home to Monroe for Christmas and went to see the barber who had been cutting his hair since he was a kid. The barber said, 'Hey, Webb, you ought to try and get on that Tall Texan show. If you get on that show, you' 11 have it made'. That made Webb mad,'and he went down to this bar where he had drunk all his life. The guy poured him a drink and said, 'Webb, you oughta watch that Tall Texan show at seven o' clock' . Webb got mad as hell and said, 'Who IS this Tall Texan?' He was at his sister's house at seven and he watched the show. He said, 'That' s Merle Kilgore! The kid that used to carry everyone's guitar at the Hayride'... 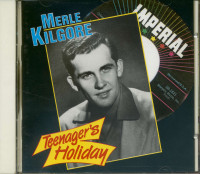