P Secure bonuspoints now
Description Review 0
Description
'JW's got it down! So much soul, and nice material. You can't beat it. I am telling the truth.'... more
Close menu

'JW's got it down! So much soul, and nice material. You can't beat it. I am telling the truth.' - Hubert Sumlin. - Canada's Top Touring Blues Act, JW-Jones is back with another blistering CD. On his 6th release on the CrossCut Records label, Jones teams up with two legendary bluesmen, Hubert Sumlin (worked with Howlin' Wolf for over 20 years, and was named in the 100 Greatest Guitarists of all Time by Rolling Stone Magazine) and Charlie Musselwhite (known as one of the top harmonica players in blues history, he has won 18 W.C. Handy/Blues Music Awards, 6 Grammy nominations, and was the harp player on INXS' 'Suicide Blonde'). 'Midnight Memphis Sun' contains 8 originals (6 co-written by Tim Wynne-Jones) and 4 covers. The majority of the disc was recorded at the birth place of Rock and Roll, Sun Studios in Memphis, and features modern song writing about current issues including the global recession (check out the R&B flavored 'Off the Market') and the Bernard Madoff scandal (on the hard-hitting 'Born Operator'). - 'One of the country's top blues guitar stars' (Globe and Mail), JW-Jones has one of the most energetic and exciting live shows on the scene and has played 14 countries and 4 continents. - In 2009, Guitar World Magazine featured a CD called 'Guitar Masters Vol. 2' that put Jones alongside guitar stars B.B. King , Jimmy Page, Jeff Beck, Carlos Santana and more. 'It's great to see young people have the right idea about what blues music is. Already unbelievable and he's only going to get better... he's a natural with excellent phrasing.' - Kim Wilson, Fabulous Thunderbirds. 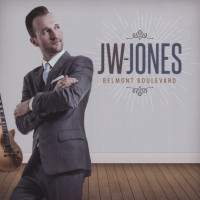