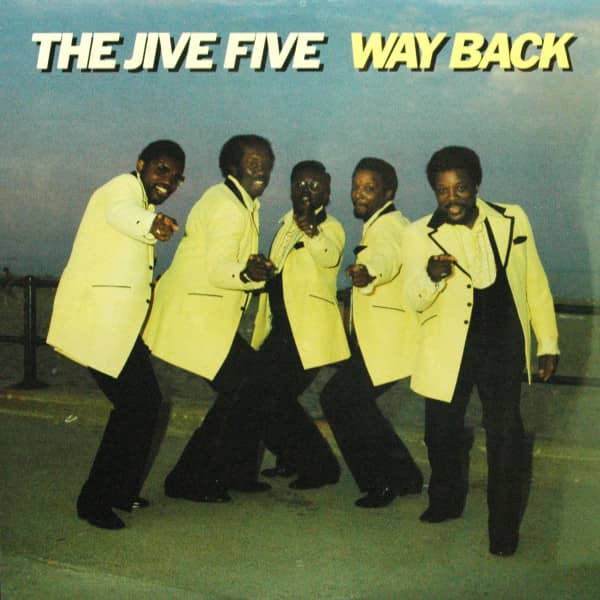 The Jive Five: Way Back

Eugene Pitt had walked down those same stairs hundreds of times before, maybe thousands. But this had never happened before. When it did, Eugene smiled and began to think back . . . way back.

He had worn that same jacket for years, the one with the words “Jive Five" on the back. He thought nothing of it as he came to the corner of Nostrand Avenue and DeKalb in Brooklyn 's Bedford-Stuyvesant section, and no one gave him a second look.

Eugene passed the triangle where the four exits from the subway station converged. Reaching for his subway token, he remembered the days when the original Jive Five gathered on that spot and sang for the subway riders returning home from a long day of work. Another smile came to Eugene 's face as he recalled how the group's vocal harmonies brought happiness to the passers-by . . . way back, way back, twenty years ago.

A Although Eugene had moved uptown a long time ago, leaving behind the housing projects and the street corners, the candy stores and the school- yards where the .live Five were born, he still loved to visit the old neighborhood. if only someone would recognize blended into the night air at every cor- ner and echoed in every hallway.

Eugene gave out a little laugh to him- self just thinking about the fun they used to have. Girls would gather around the group straining for a better * look, sometimes even daring to sing along. There 'd be battles of the groups, which .the .live Five always won, of course, because they were on their own turf and rival groups didn't stand a chance. But that was way back. Maybe no one else remembered. Eugene stepped closer to the plat- form as he saw the GG train approaching. Suddenly, a guy who 'd been giving him curious looks stepped up to him. Eugene, checking the fellow out, noticed that they were probably about the same age. Maybe he was supposed to know the guy? Did they go to school together? Was he from one of the other groups? No, the face didn't look familiar.

& , “Say, man," said the onlooker, “I couldn't help but notice that your jacket says Jive Five on it. That wouldn't happen to be the Jive Five, would lt? You know, the group that sang 'My True Story' and 'What Time is It?' and 'I'm A Happy Man'? Do you know them or something ?'...

Review 0
Read, write and discuss reviews... more
Close menu
Customer evaluation for "Way Back"
Write an evaluation
Evaluations will be activated after verification.
Weitere Artikel von The Jive Five
The Jive 5: Let Us All Go Back (CD) Art-Nr.: CD9206006