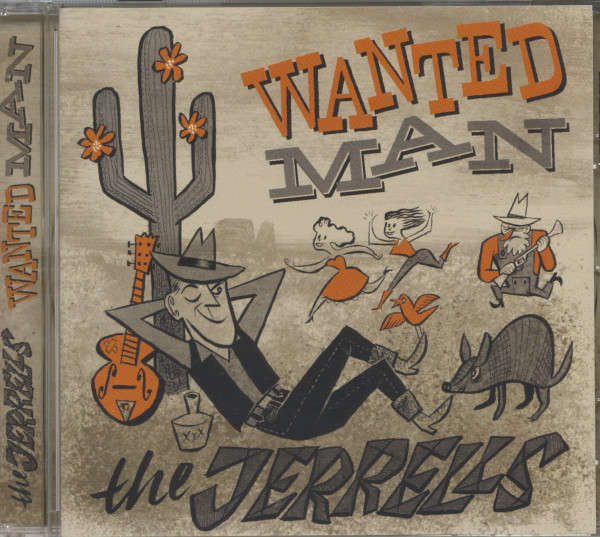 The Jarrells formed in late 2019 to explore the more electric American roots styles of the 1950s. By then I had spent decades playing the hillbilly, western and swing music of the 20s, 30s and 40s with White Ghost Shivers, as well as more traditional country styles. As a kid, I was completely enthralled with rock n' roll in all its forms. So it was only logical that it all came together now in The Jerrells.
Wanted Man is a collection of songs from 3 different recording sessions. Chronologically, Powder Room Mama was the first song The Jerrells ever recorded and the first song I wrote for the band. In the winter of 2019, I had the opportunity to record high quality video and audio, so I put together a band virtually overnight. Without a single rehearsal, we quickly recorded a handful of songs 100% live to create a demo video for the band with the goal of getting gigs. We recorded mostly cover songs to show the different styles we were capable of, from swing to rock n' roll. It was all standard material, plus Powder Room Mama. I really felt like I had found something in terms of songwriting and the musical direction of the band.
In early 2020, I wrote a bunch of songs and went into a real studio in Austin, TX. We recorded what would become the bulk of this record. I had been listening to a lot of rockabilly, new and old, and that influence is certainly here, along with a variety of other electro-roots styles. We ended up with 9 songs, and the record almost came out as a short LP. Then Pandemic came along.
At this point I was completely taken in by the wild side of 50's hillbilly boogie, country bop and rockabilly and decided to do some recording at home. I ended up recording most of the instruments myself and had some friends record some parts remotely since we were all under lock and key. Two of those songs from that time of the summer of 2020 made it onto this collection and complete the album, which now has 12 songs.
It's been a long road, but we're all very happy with Wanted Man, and hope you like it too!
Jeremy Slemenda

This product will be released at 14 October 2022