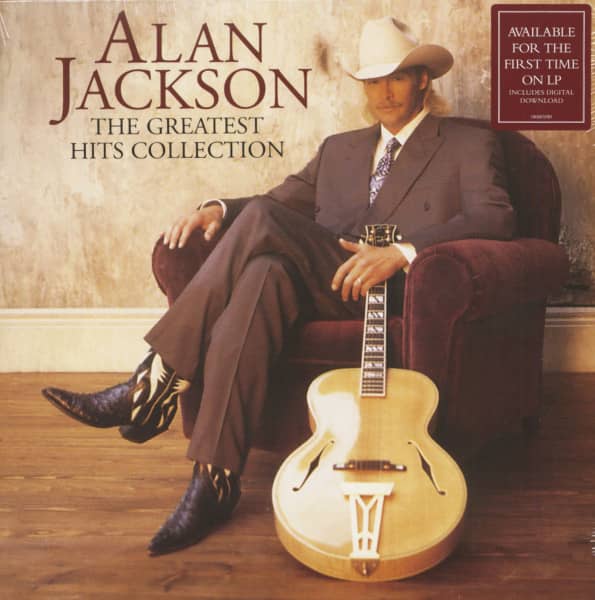 Alan Jackson has earned his place in the history of country music. Behind his guitar and knowing smile is a singer-songwriter with a knack for simple but impressive melodies who combines the honky-tonk sensibility of Vintage Music Row with contemporary production, making him a statesman of the genre. He found success by staying true to his love of traditional country music, bringing 50 singles to the top 10 of Billboard's country singles charts, more than half of which climbed to #1.

Originally released in 1995, just five short years after he broke into the mainstream with the top 5 country album Here In The Real World, The Greatest Hits Collection is the perfect overview of Alan Jackson's early years of hit making. Available for the first time on vinyl as a 2LP set, The Greatest Hits Collection includes classics such as "Don't Rock The Jukebox", "She's Got Rhythm (and I Got The Blues)", "Chattahoochee" and "Summertime Blues" as well as the exclusive new songs "Tall, Tall Trees" and "I'll Try", both of which also topped the Billboard country single charts.

The Newnan, Georgia native has sold nearly 60 million albums and released more than 60 singles with 50 landing in the top ten and 35 soaring all the way to No. 1. A member of the Nashville Songwriters Hall of Fame and the Grand Ole Opry, Jackson has won more than 150 industry awards, including 18 Academy of Country Music Awards, 16 Country Music Association Awards, two Grammys and ASCAP’s Founders and Golden Note Awards. He also received the first-ever ASCAP Heritage Award in 2014 having earned the title of most performed country music songwriter-artist of ASCAP’s first 100 years.