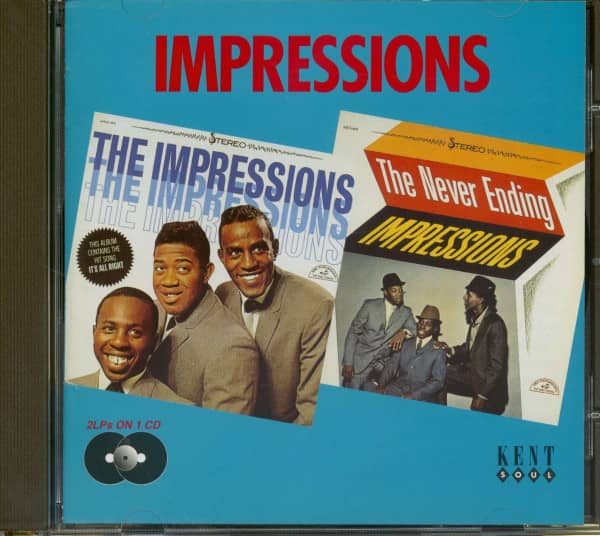 These two 1963 and 1964 albums are contained on this the first of five CDs that will comprehensively cover the ABC-Paramount recordings of the fabulous vocal group The Impressions. In their various guises, the group scored 133 (yes, that's not a misprint!) US R&B chart singles and 85 on the Pop chart. Led by the charismatic singer, songwriter and guitarist Curtis Mayfield, the group also included Fred Cash and Sam Gooden (and, for the first album only, Arthur and Richard Brooks).In 1958, the group had backed Jerry Butler such recordings as his mammoth hit For Your Precious Love (No 3 R&B, No 11 Pop).

Mayfield continued to work with Butler as a musical arranger and guitarist but in 1961, The Impressions signed with ABC-Paramount and cut the sultry, Latin-tinged Gypsy Woman. It achieved classic status reaching the charts at No 2 R&B and No 20 Pop.The songs that comprised the first album 'The Impressions' collected early songs from 1961 and 1962 and the subsequent year's sessions, including their next big hit It's All Right (No 1 R&B and No 4 Pop). It also defined the Chicago sound of soul - smooth, cleverly arranged vocals, light dramatic orchestrations and subtle but compelling rhythms.Now tied up with the other co-founder of the Chicago sound - Johnny Pate - Mayfield and The Impressions cut their first complete album 'Never Ending Impressions', a key album from that soul era.

The sound The Impressions created influenced not only American and European pop balladeers (The Walker Brothers, among them) but it had a great influence on Jamaican music. I Gotta Keep On Movin' supposedly influenced Bob Marley when writing the reggae classic I Shot The Sheriff. A message from the keeper of the Kent vaults: Kent originally issued these albums on vinyl as KENT 005 and 008 respectively but they are long deleted. This release marks their first time ever on CD in their original form.

The Impressions brought Fred Cash up from Chattanooga, Tennessee to replace Butler. He'd been in The Roosters there along with tenor-singing brothers Arthur and Richard Brooks and baritone Sam Gooden, who now comprised the rest of The Impressions. With Mayfield's airy high tenor out front, the quintet stuck around Vee-Jay's Abner label for a short while, but A&R man Calvin Carter didn't care for Curtis as a front man, so they were dropped. The Impressions made a single for Bandera Records, owned by Vi Muszynski, who had brought them to Vee-Jay in the first place, but Listen didn't reverse their fading fortunes. Curtis took a break to tour as Butler's guitarist, the pair co-writing three major R&B sellers for Jerry at Vee-Jay in 1960-61: the R&B chart-topping He Will Break Your Heart, Find Another Girl, and I'm A Telling You.

"In the writing of them, we would mess around, he would wind up singing the hook with me. So we decided to record 'em that way, and it turned out very well," says Butler. "I think a lot of that had to do with the way Curtis played guitar." 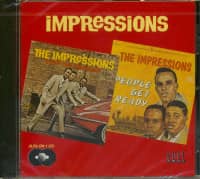 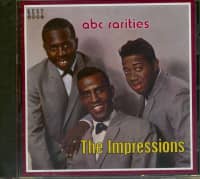