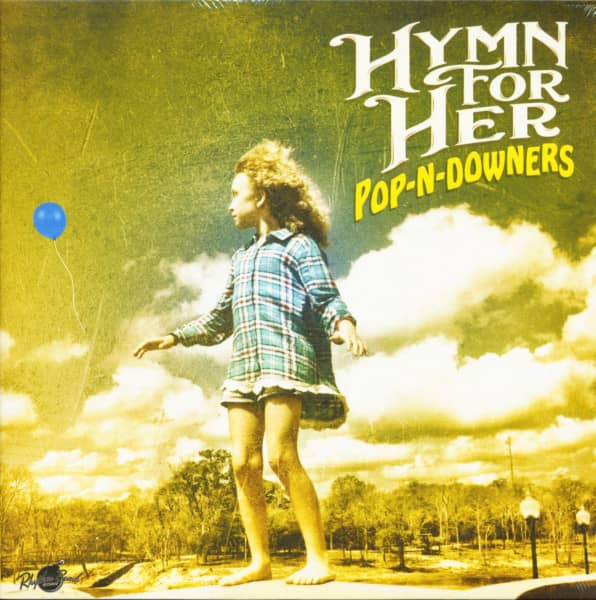 Hymn For Her: Pop-N-Downers (LP)

Now finally also available as LP: the current album of the obscure Americana duo from Florida, including a song recorded on JACK WHITE, is a little sensation and will be released on RHYTHM BOMB.
Pop-N-Downers' is nothing less than a big surprise: Folk, Americana and Country increasingly meet influences of British 60s Pop and Psychedelia, LoFi was yesterday, the tasteful eclecticism reaches dizzying heights. Even the American Rolling Stone couldn't help but include the single video for 'Blue Balloons', actually a Sgt. Peppereske Spacepop anthem, in his weekly '10 best country and americana songs of the week'.
The married couple LUCY TIGHT and WAYNE WAXING, who have been living with their daughter in a silver Bambi Airstream trailer from 1961 for years, create an album from fragile acoustic ballads to creaky single-string blues to Mediterranean-Spanish flair in Roses', or 'Dingle Town', a Celtic bluegrass bastard, that leaves you speechless. If you don't find a new favorite song here, you won't find it anywhere else. In 'November' TIGHT even creates an impeccable Ipanema-styled Bossa vocal, which is of course perfectly balanced in this firework of variety.
It is no coincidence that the only real Lo-Fi number recorded with the daughter in the THIRD MAN RECORDS studio at JACK WHITE is not mentioned in the tracklist at the end of the album. This album doesn't need name dropping. Absolute tip!

Review 0
Read, write and discuss reviews... more
Close menu
Customer evaluation for "Pop-N-Downers (LP)"
Write an evaluation
Evaluations will be activated after verification.
Weitere Artikel von Hymn For Her
Hymn For Her: Drive Til U Die (CD) Art-Nr.: CDRBR5885