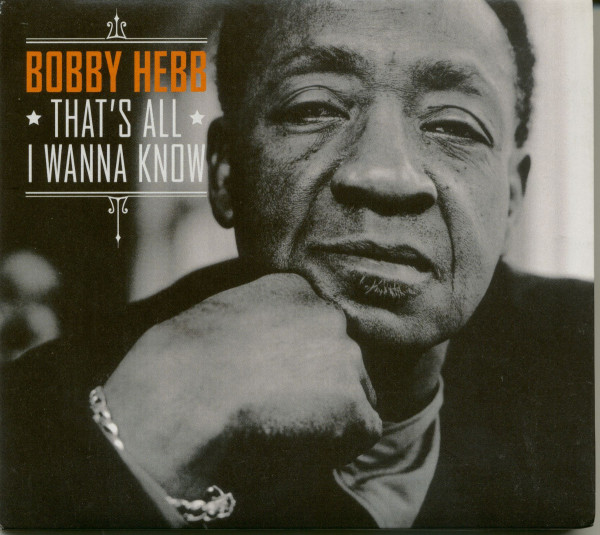 (2003-05 'Tuiton') (40:52/13) One-hit-wonder Bobby Hebb returns with his first new album in thirty five years. Produced in Germany, he has re-recorded a couple of his favorites, including - of course - his major hit record, Sunny, a Syl Johnson tune, a James Carr song, a re-working of Little Milton's 1965 debut single for Chess, a.m.o.
Great comeback album, perfectly recorded easy grooving soul music that should have opened doors for him. Comes with beautiful digipak.

by Joe Viglione (Rock Journalist):
This writer remembers Bobby Hebb heading to Germany to record around the week of U.S. President George W. Bush's Iraq war, on or around March 20, 2003. There were thoughts about whether or not Bobby should go during such a tense time. The universe is quite fortunate that he did as the producer team around Rudiger Ladwig superb production work captures the essence of Bobby's extraordinary voice and intuitive approach to the material. The composer/singer of Sunny recorded much, much more than his 1966 debut album and the 1970 release, Love Games. Which, of course, makes his 3rd album release ''That's All I Wanna Know'' so very special.  It is truly the singer/songwriter giving an overview of his career as well as being the only full album release from Bobby Hebb at the dawn of the new millennium.

Walking through the lovely town of Rockport, Massachusetts on Cape Ann one summer day with Mr. Hebb, it was amazing to see the amount of people who would wave to him and stop him in the street to chat.  He could have run for Mayor - if towns in Massachusetts had mayors!  And that's a big part of why these recordings are so very special, because they have that uptempo optimism which makes you feel happy - like when you hear the re-make of Love Love Love or what this writer feels deserves to be a future Northern Soul classic, the moving and very danceable Don't Tear Me Down.  It took a musical movement like Northern Soul to re-discover Love Love Love from the original 1966 Sunny album, the song charting in Europe in the early '70s some years after its original release.

In search of more Hebb music the rabid Northern Soul fans discovered the Gamble & Huff gem, You Want To Change Me but it is Sunny, of course, that is the constant and paved the way from song to song, the thread that brings us all together and which opens the door to discovering the genius of its creator, Bobby Hebb.

Ladwig, who had released two volumes of Sunny cover versions on the Trocadero label, conceived this 13 song disc after he first met the artist during Bobby Hebb's June 2002 tour of Germany. "I had the idea doing an album when Bobby played Cold Cold Night live at Radio1 in Berlin while promoting "A Collection of Various Interpretations of Sunny, Part 2", Rudiger noted. Ladwig´s general idea for this music, recorded in March of 2003, was to re-record earlier Bobby Hebb material, track the first ever ''duet'' of Sunny by the original artist, and follow Bobby's musical paths. From Proud Woman, the Fred Burch/Skip Gibbs tune that Johnny Adams put on disc, to Hank Williams` Cold Cold Heart, which was in the repertoire of Roy Acuff, the man a thirteen year old Bobby Hebb toured with in the early 1950s, ''That's All I Wanna Know'', is an audio journey touching various aspects of this legendary performer's career.

Cold Cold Night was written by Bobby and Phil Medley. Phil is most famous for A Million To One, the hit for Jimmy Charles and Donny Osmond, as well as Twist & Shout (Shaking Up Baby...), which charted by The Isley Brothers in 1962 and The Beatles in 1964. This is the first time the Phil Medley/Bobby Hebb collaboration has ever been put on an album!

Since Lou Rawls won a Grammy with Bobby Hebb and Sandy Baron's classic, A Natural Man, Hebb wanted to return the favor - so Bobby performs a Lou Rawls staple, When Love Goes Wrong, in this collection. Song selection runs the gamut - contemporary music like Willow Tree (from the catalogue of Philadelphia's G. Love & Special Sauce) to the tried and true - a cover of Richard Shann's Don't Tear Me Down, made famous by Charlie Rich.

''That's All I Wanna Know'' also gives the world updates on Hebb's other chart recordings starting with a very funky reworking of A Satisfied Mind, the song Roy Acuff loved to play. Joe ''Red'' Hayes/Jack Rhodes composed this popular title which hit for Porter Wagoner in 1955 and broke the Top 40 in America for Bobby in November of 1966. Also re-cut for this disc is the 1972 sleeper hit in the U.K., the fantastic Love, Love, Love, composed by ''Sunny" arranger Joe Renzetti and producer Jerry Ross. The Northern Soul classic charted in the U.K. six years after it was initially released. A surprise bonus is a re-make of Darryl Carter's Bound by Love, a Philips 45 single that came after Sunny, but is now for the first time on an album.

You can now relax to the third album released in Bobby Hebb's lifetime. It fits into all sorts of genres - the cool vibe of the Lounge set with their hip ''Bachelor Pad'' music; the pop fans who have waited 35 years for more tunes and emotions from Bobby Hebb, and those wonderful people who dance to Northern Soul - it is all here for all of them and more, and it's in glorious stereo. 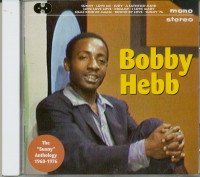