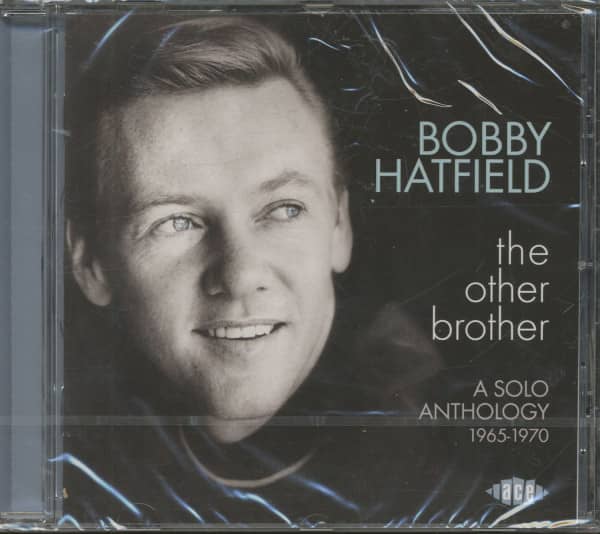 The blue-eyed soul brother’s Verve and MGM recordings anthologised on CD for the first time, including seven previously unissued masters.
With his partner Bill Medley, Bobby Hatfield lit up the radio airwaves and the charts throughout the 1960s. In collaboration with maverick genius Phil Spector, the Righteous Brothers gave the world one of the greatest records of the decade in ‘You’ve Lost That Lovin’ Feelin’’, a 1965 chart-topper that became the most broadcast record of all time. Several of the tracks issued in the duo’s name during their Spector tenure were actually Bobby Hatfield solo recordings, including ‘Ebb Tide’, ‘(I Love You) For Sentimental Reasons’ and ‘Unchained Melody’. Nevertheless, many people will recall Bill’s name much more readily than Bobby’s. Ace’s new compilation, “The Other Brother”, strives to rectify that by bringing together 24 solo performances from “the high-voiced one”.
Bobby and Bill had both been in other groups before teaming up, and both had issued solo 45s as early as 1963, but it wasn’t until the duo joined Verve Records, post-Spector, that they began their solo careers in earnest, originally running parallel with recording as the Righteous Brothers. Bobby never had an album issued during the 60s. One was recorded and given a catalogue number, but it didn’t reach the pressing plant. His versions of ‘Crying In The Chapel’, Gerry Goffin & Carole King’s ‘So Much Love’ and Barry Mann & Cynthia Weil’s ‘See That Girl’ from that shelved LP debut here, along with four more previously unissued tracks, some mixed for the first time especially for this CD. The collection also includes Bobby’s 1970 album “Messin’ In Muscle Shoals” in its entirety.
Bobby’s solo career never took off in the way Bill Medley’s did, but his lack of hits is in no way a reflection of musical quality. “The Other Brother” is a fabulous summation of his solo work that will improve any collection of great American music, particularly of the blue-eyed soul variety.
Tony Rounce