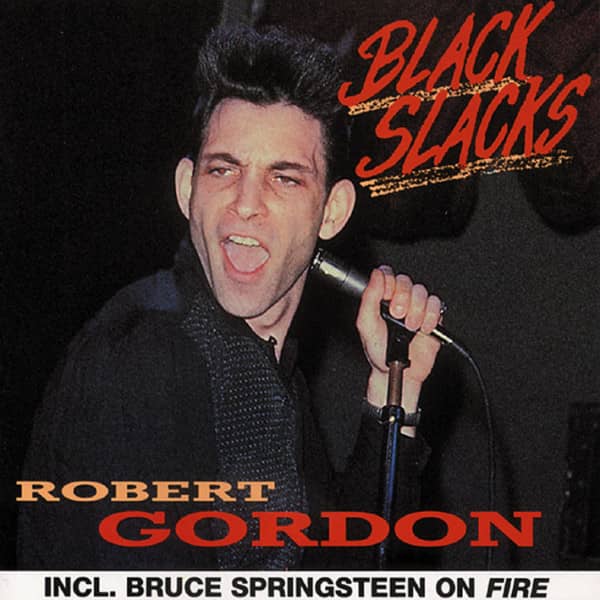 1-CD with 12-page booklet, 25 single titles. Playing time approx. 66 minutes.
When Robert Gordon burst onto the scene in late 1977 it seemed to presage a rockabilly revival. Perhaps more than anything else though, Gordon's accep-tance was a reaction to the sterility of pop music in the late '70s. In an era of overblown supergroups and nascent disco, it was profoundly refreshing to hear someone scream "My gal is red hot!" and catch the deathless refrain, "Your gal ain't doodley squat!" There never was a rockabilly revival - but then Gordon never was a rockabilly revivalist, although he certainly adopted some of the production values of early rock & roll: spontaneity, sparseness, visceral energy and absolute lack of pretension. The feel rather than precise re-creation was Gordon's goal, and it is a mark of his success that his music still sounds fresh and vital a decade or more later.

The essentials of Gordon's career and his meeting with Link Wray were covered in the notes accompanying the first Bear Family retrospective of his work, 'Red Hot' (BCD 15446). Gordon grew up in the Washington, D.C. area and recalled to Dave Booth, "The first people who influenced me were Elvis Presley, Gene Vincent, Jack Scott, Wanda Jackson and Hank Williams."

All of these artists, with the exception of Hank Williams, were very real to Link Wray who had worked with them or hung out with them. Thus the initial pairing of Gordon with Link Wray not only gave Gordon instant credibility but also a picker who was equally determined not to be cast simply as a revivalist. Of Gordon's early influences, Gene Vincent was paramount. "My introduction to Gene was 'Woman Love' and 'Be-Bop-A-Lula'," he recalled, "but there were so many other great songs that he did. He was a true rocker. Vocally he was my biggest influence. He wasn't a rockabilly. He was a bop cat. I try to get the Gene Vincent feeling with a heavier sound." Link Wray's connection to Vincent was more tangible; Vincent had played rhythm guitar with Wray and his brothers on live radio in Norfolk in 1949.

And when it came time to cover Gene Vincent songs, Gordon and Wray did not head for the obvious but in-stead chose songs like Five Days, Five Days and other comparably obscure entries in the Vincent canon.
Eddie Cochran was another artist whom both Gordon and Wray admired; Gor-don from afar - Wray from close at hand. "I did a show in Silver Spring, Maryland with Eddie in 1957," asserted Wray. "This was before 'Rumble.' We were a local added attraction on a bill with the Spaniels, Brook Benton and Terry & the Pirates. It snowed so hard that nobody showed up. We all sang hymns backstage. Eddie played piano. The following night the place was packed and we backed him up. He was a terrific musician." Gordon had seen the movie 'The Girl Can't Help It' on a number of occasions and revived Twen-ty Flight Rock from the movie as well as Summertime Blues. Gordon's first album attracted the attention of Bruce Springsteen.

Not yet en-dowed with the godlike status he acquired through the subsequent decade, Springsteen sat in with the group at NYU and sang Heartbreak Hotel as a duet with Gordon. "We became quite good friends," recalled Gordon to Dave Booth, "and he gave me the song 'Fire.' He came down to the studio and played piano on the session. I think he was interested to see the way that Link and I worked - we did the album in four days." Although Springsteen's con-tribution to Gordon's version of Fire is barely noticeable, it ranks as among the more interesting of the Boss's ephemeral ventures. Just at the point when it seemed as though Gordon's career was taking off, it slowed down. One significant blow came when Fire was covered by the Pointer Sisters who took it to number two on the pop charts. Link Wray quit the line-up shortly after the second album was released in 1978 and was replaced by British session ace Chris Spedding. At the same time, Gordon left Private Stock Records, which was heading into bankruptcy, and signed with RCA, a move that brought him enormous personal gratification but steadily declining sales.

Over the course of three RCA albums, Gordon recorded a greater variety of material; the oldies were less recognisable and there was an increasing num-ber of originals. Trying to define an original course for himself, Gordon lost his market. Those who had responded merely to the attitude that Gordon struck quickly moved on, leaving him with a core market that was insufficiently large to encourage RCA to retain his contract. RCA tried to steer Gordon towards the country market but their efforts met with scant success.

Gordon's revival of Walk On By for example, only reached number 98 in the country charts. Chris Spedding quit Gordon's line-up in 1980 and was replaced by Danny Gatton, a D.C. legend for a number of years and technically the most adroit of the three eminent lead guitarists whom Gordon employed. A decade later, Gatton is starting to carve a solo career in the United States. His self produced and distributed solo albums have attracted critical acclaim but have covered too many musical bases to stand any chance of commercial success. Gatton has always had eclectic taste that embraced everything from blues and flamenco to the most accomplished jazz picking. He had just completed a five year gig with Roger Miller when Gordon called upon him to take Chris Spedding's place in the line-up.

It was move that brought mixed blessings for Gatton who welcomed the steady paycheque but felt that he was working in an artistically arid environment. "I never played anything on anybody else's records where I really got to do anything," he asserted to 'Guitar Player' magazine. "I would do a session with Robert and they'd say, 'Hey, forget everything you know. Play like you're twelve years old. Don't play anything flashy. Just play real dumb.' That wasn't real satisfying to the soul."
Despite his evident dissatisfaction, Gatton was a powerhouse on Gordon's last tours in support of his final RCA release. He was supported by Paul Shaf-fer, the Canadian keyboard player who as an actor so succinctly parodied 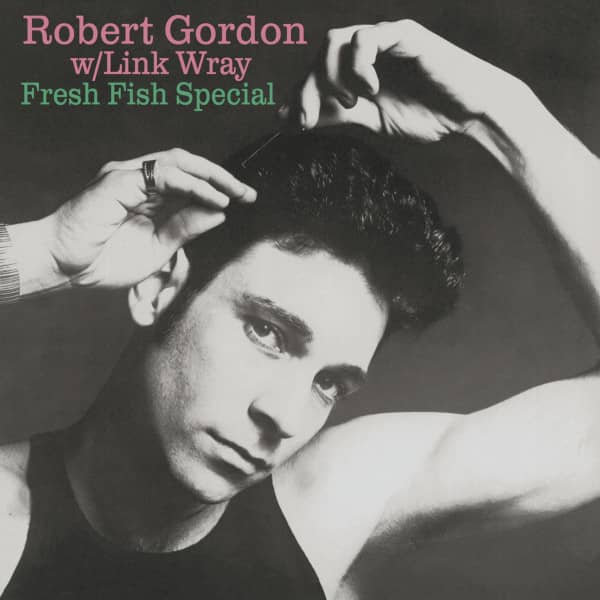 Mainstream interest in rockabilly had ebbed to a disturbingly low level when Robert Gordon helped restore the idiom to international prominence. His vocal style heavily influenced by Gene Vincent, Jack Scott, and Billy Riley, Gordon rendered the classic music of those hallowed ‘50s legends cool to a new generation of fans that in many cases weren’t even aware of their existence prior to Gordon’s emergence. For others, he represented a throwback to the beloved rock and roll of their youth, when pomade and pegged pants were imperative fashion statements.

Gordon, who died October 18, 2022 in Bethesda, Maryland at age 75, had little use for rock music of the ‘60s and beyond. Born in Bethesda, Maryland on March 29, 1947, Gordon heard Elvis’ immortal Heartbreak Hotel on the radio when he was nine and knew what he wanted to do with his life. During the ‘60s, Gordon preferred attending shows at the Howard Theater in Washington, D.C., where James Brown and Otis Redding drove crowds into a sweat-stained frenzy, to listening to the British Invasion crowd.

A 1970 relocation to New York City with his young family preceded Robert Gordon joining what’s been described as a punk rock outfit, The Tuff Darts, as their lead singer. Their All For The Love Of Rock And Roll and two more songs were included on a compilation album, ‘Live At CBGB’s,’ dedicated to New York’s thriving new wave scene. Producer Richard Gottehrer, formerly of The Strangeloves and a longtime successful record producer, caught a Tuff Darts rehearsal and rather than opting to work with the band, suggested teaming a solo Gordon with grizzled guitar legend Link Wray, whose thundering instrumental Rumble was a major 1958 hit and went a long way towards introducing the concept of the crunching power chord.

Gottehrer, who shared his production credit with the singer this time, summoned The Jordanaires to handle the backing vocals on Gordon’s ’78 Private Stock encore set ‘Fresh Fish Special,’ Wray again lending his blistering fretwork to the proceedings. Once again, remakes of classic rockers by Vincent, Scott, Cochran, Elvis, Johnny Burnette, Bob Luman, and Frankie Ford were the order of the day, along with a couple more of Link’s originals. But there was a rooker: Fire was the work of prolific rocker Bruce Springsteen (who played piano on the song), and the feel was quite a bit more modern. The Pointer Sisters’ smash version of Fire killed any chance of Gordon enjoying a hit with the theme.

After Private Stock tanked, Robert Gordon switched over to RCA for his ’79 LP ‘Rock Billy Boogie,’ and Wray was gone, replaced on lead guitar by British rocker Chris Spedding. Gottehrer was still in charge and the basic concept survived the move intact, Gordon tearing into classics by Conway Twitty, Hayden Thompson, Burnette, Cochran, Presley, Fats Domino, Leroy Van Dyke, and Joe Bennett and The Sparkletones along with a freshly prepared tribute to Vincent, The Catman. It turned out to be his highest-charting album.

But change was decidedly in the air on ‘Are You Gonna Be The One,’ Gordon’s last RCA long-player in 1981. Instead of Gottehrer ensconced in the driver’s seat, Robert produced the album with Lance Quinn and Scott Litt, and the emphasis was no longer on familiar remakes apart from Don Gibson’s Look Who’s Blue. Originals now dominated the proceedings, including three compositions by young rocker Marshall Crenshaw. One of Crenshaw’s contributions, Someday, Someway, briefly cracked the pop hit parade as a single. Washington, D.C. guitar wizard Danny Gatton was Gordon’s fret foil this time.

One thing’s for sure: Robert Gordon’s lifelong love for real deal rockabilly never wavered, defining his career from one end to the other. 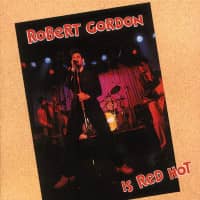 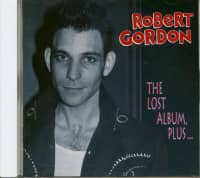 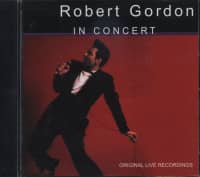 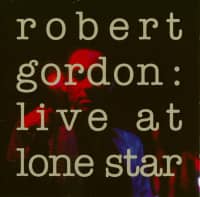