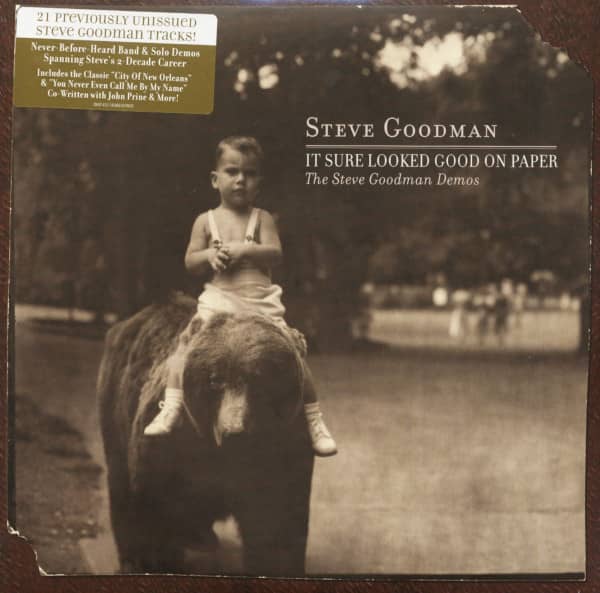 Steave Goodman: It Sure Looks Good On Paper - The Steve Goodman Demos (2-LP)

The Steve Goodman Demos presents an unparalleled look into Goodman's two decade career from a songwriting and an 'in the studio' perspective, before the world lost him far too young. Luckily, the recordings of his thoughts and works in progress live on. - 20 previously unissued recordings. Contains both solo and band demos. Versions of classics including "City Of New Orleans," "You Never Even Call Me By My Name," and more. Packaging contains liner notes from Lee Zimmerman and photos from the Goodman family archivesThere is no denying Steve Goodman's impact on the world of songwriting.

From demos of the now classic "City Of New Orleans" and "You Never Even Call Me By My Name," to early versions of "The Auctioneer," written by Leroy Van Dyke and Buddy Black and the traditional, "The Water Is Wide," It Sure Looked Good On Paper: The Steve Goodman Demos finds Goodman artistically exploring. Also included are tracks written for film projects including "Face On The Cutting Room Floor" - written for the Steve Martin comedy Dead Men Don't Wear Plaid, co-penned with the Nitty Gritty Dirt Band's Jimmy Ibbotson, and later covered by that band, and "Six Pack," written for inclusion on the soundtrack for the 1980 Kurt Russell movie, Used Cars. Neither film submission made it to the final feature, but it's enticing to imagine a Kenny Rogers version of "Six Pack," as it was Rogers for whom this demo was intended. The CD and gatefold double-LP contain new liner notes from Lee Zimmerman, and photos from the Goodman family archive, provided by Steve's daughter, Rosanna, who was involved in every step of the process.