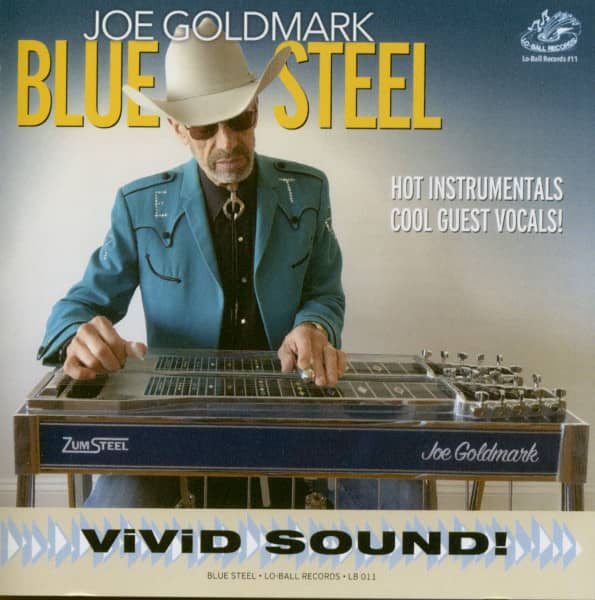 (Lo-Ball Records) 13 tracks
Blue Steel is Joe Goldmark's most exciting album to date. He mixes original instrumentals with unusual vocal selections, creating a true Americana blend. Dallis Craft contributes gorgeous renditions of tunes written by Jeff Lynne, Graham Parker and Lefty Frizzell, while Glenn Walters works the R&B side of the street with tunes by Jimmy McCracklin, B. B. King and Rufus Thomas. Goldmark has seven pedal steel guitar CDs under his belt, including the popular 'Seducing the 60s' (Lo-Ball #9), and the critically acclaimed 'Steelin' The Beatles' (Lo-Ball #8). He also recorded three seminal albums as a member of the storied 'Jim Campilongo and the 10 Gallon Cats. ' He toured and recorded with the 'Twangbangers,' the Hightone Records all-star band that featured Redd Volkaert, Bill Kirchen and Dallas Wayne. He also has toured with Jim Lauderdale and Peter Rowan, and played in the legendary 'Texas Chainsaw Band. ' He is currently a partner at Amoeba Music, and performs in San Francisco with his band, 'The Seducers.'

Joe Goldmark has a unique vision for the steel guitar. He started recording in 1980, and has nine of his own albums (three vinyl, six CDs) featuring rock, pop, soul and world music played on this "country" instrument. He's successfully adapted many melodic and fun songs to the pleasing sound of the pedal steel guitar, as well as writing many of his own interesting originals.

Joe has always been a music maven. Growing up in Tucson, Arizona, he played cello from the age of nine, but also took up guitar and played in garage bands. He moved to San Francisco for High School and started playing bass in soul bands. This was during the late 60's, and Joe was enamored of the San Francisco Sound, and saw many of the greats, including Hendrix, Cream, Doors, Big Brother, etc. It was while watching Jerry Garcia play with the New Riders Of The Purple Sage, who were opening for the Grateful Dead, that Joe got bitten by the pedal steel bug. He soon dropped out of college to play the steel guitar full time, which he pretty much did for the next fifteen years. After getting married and having a son in the mid 80's, Joe was fortunate to get a day job, going into the pizza business. Ten years later, he came full circle by becoming a partner at Amoeba Music, and totally immersed in the music business. However, he never stopped playing the pedal steel, which he describes as the only instrument that makes practicing enjoyable, because of the pleasing sounds that the chords make, bending into each other.

Joe's recordings: "Blue Steel" (2018), "The Wham of That Steel Man" (2012), "Seducing the 60s" (2007), "Strong Like Bull...But Sensitive Like Squirrel" (2001), "All Hat - No Cattle" (1999), "Steelin' the Beatles" (1997), "All Over the Road" (1994), "Rockin' It" (1981 LP), "Vertigo" (1978 LP), "Pickin' My Pleasures" (1977 LP), and "The Goldmark Round-Up," a reissue of his 20 favorite selections remastered from the three LPs (1996). His three late 1990s albums with Jim Campilongo and the 10 Gallon Cats are considered ground breaking classics in an updated Speedy West and Jimmy Bryant vein. He also has recorded with other artists including "True Stories" with David Byrne, "Restless Rambling Heart" with Laurie Lewis, and nine albums with "The Usual Suspects," a project including Mike Bloomfield, Taj Mahal, Peter Rowan, Norton Buffalo, and Maria Muldaur. Besides his recording work, Joe has written and published The International Steel Guitar and Dobro Discography -- 8th Edition.