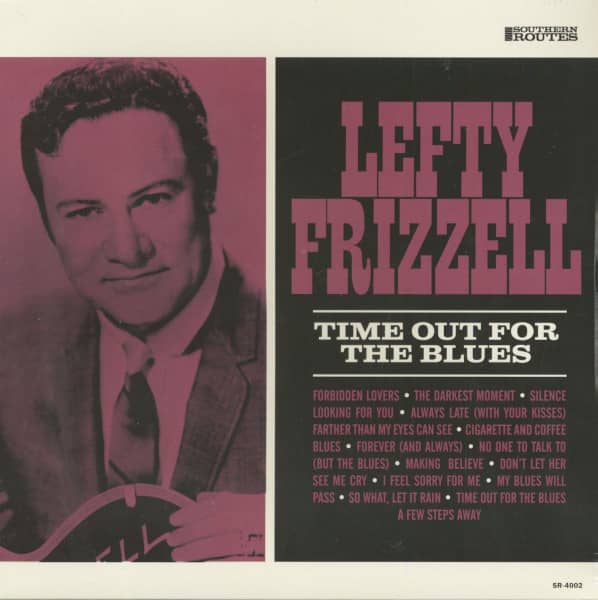 Lefty Frizzell: Time Out For The Blues (LP)

(Southern Routes) 16 tracks
Lefty Frizzell was an artistic giant who ex-erted a powerful influence over country music. He introduced an original vocal style that profoundly influenced George Jones, Merle Haggard, Keith Whitley, Randy Travis and still echoes through contemporary country. An illimitably creative stylist who enjoyed some of the most dramat-ic, record setting commercial successes by any singer, Frizzell was also a star crossed fool who, thanks to his seemingly unquenchable thirst for hard liquor, died almost broke and nearly forgot-ten.
His is one of the most bittersweet country music sagas, but Frizzell left behind an astonish-ing trove of near perfect performances and un-forgettable songs. Where Hank Williams' vocals were sharp and angular, Lefty's was all pliant curves, a malleable, spontaneous, almost slurred sound, one where luxuriously drawn out vowels were reshaped in deliciously mellow new configurations; his appeal and tone were not dissimilar to smooth country crooners like Eddy Arnold and Tommy Duncan, but Lefty's resolutely good-timing honky-tonk ways were unmistakable Born March 31 in Corsicana Texas, as the son of a wild cat oilman Frizzell's childhood was an unstable, semi itinerant existence; music was al-ways a powerful force in his life and Frizzell, like fellow Lone Star staters Gene Autry and Ernest Tubb, grew up idolizing Jimmie Rodgers but used the Yodeling Brakeman's distinctive ap-proach as a launching pad for what became his own equally singular style.
As a youth, Frizzell set out on his own and quickly became the consummate teenage honky tonk roughneck, barnstorming through the dance halls, taverns and beer joints of the sprawl-ing post-war Southwestern Desert. Thanks to an alliance with a young guitarist named Norm Stephens, whose crackling brand of hot take-off guitar perfectly complemented the singer's fast-evolving vocals, Frizell was cooking up a high-voltage, updated honky tonk, one that mixed hedonistic bar room mayhem with an in-creasingly perfected sense of the poetic. This weird combination was shaken by circumstance and mythology into a richly emotional form of expression in Roswell, New Mexico in 1947—with an arrest, for statutory rape, that precisely coin-cided with the infamous UFO crash. Languishing under a six month sentence in the Roswell hoosegow, the nineteen year old Frizell experienced a feverish, guilt-fueled explosion of creativity, churning out a series of songs that within a few years would result in his unprece-dented feat of placing 4 songs in the Billboard Country singles chart's Top 5 concurrently (an achievement that has never been rivalled).
His classic "I Love You, I'll Prove it a Thousand Ways" began life as letter of apology to his beloved wife Alice, and by the time Dallas studio wizard and Columbia records talent scout Jim Beck caught Lefty's live show in 1950, the singer, with relaxed molasses drawl, playful nature, frank unabashed sentimentality, warmth and down home charm, was already a local sensation. Together, Beck and Frizzell, with dazzlingly ideal recordings like "Always Late (With Your Kisses)" would make musical history. Frizzell's stage show was also a far more lively than was usual at the time, he was demonstrably physical—Lefty moved, swung his arms, snapped his fingers, and very actively grooved along. country singer Freddie Hart, who worked as crew member on a Hank Williams-Lefty Frizzell co-headline tour, described the effect Lefty had on female listeners are similar to that of Elvis. Despite a respectable run of chart hits and steady bookings, Frizzell, by the late 1950's, had effectively run his career into the ground.
Based in Southern California, he concentrated more on pleasure than business and tended to play the same circuit of clubs and dancehalls repeatedly, an almost self-destructive practice that left him overexposed and frequently underpaid. Frizzell enjoyed two subsequent creative and commercial rallies, with the early 60's success of number one hit "Saginaw, Michigan" and his ma-jestic 1970's stint on ABC Records, where, collabo-rating with songwriter Sanger D. "Whitey" Shafer, Frizzell introduced a whole new of series of in-stant country standards, each of them a lovingly wrought testament to the singer's undiminished creativity and interpretive prowess. Ironi,ally, it wasn't Lefty, but newcomer Johnny Rodriguez who took the Frizzell-Shafer gem "That's the Way Love Goes" to the top of the charts in 1974, but by that point. Lefty's days were numbered to a tragically short amount. In July of the following year, Frizell suddenly suffered a massive stroke and passed away, The shadow of obscurity which enveloped began to fade after Willie Nelson's 1977 tribute "To Lefty From Willie" and his 1982 Hall of Fame induction, and appreciation of Frizzell's im-pact and influence has grown steadily ever since. (Jonny Whiteside)

Video von Lefty Frizzell - Time Out For The Blues (LP)

Article properties: Lefty Frizzell: Time Out For The Blues (LP) 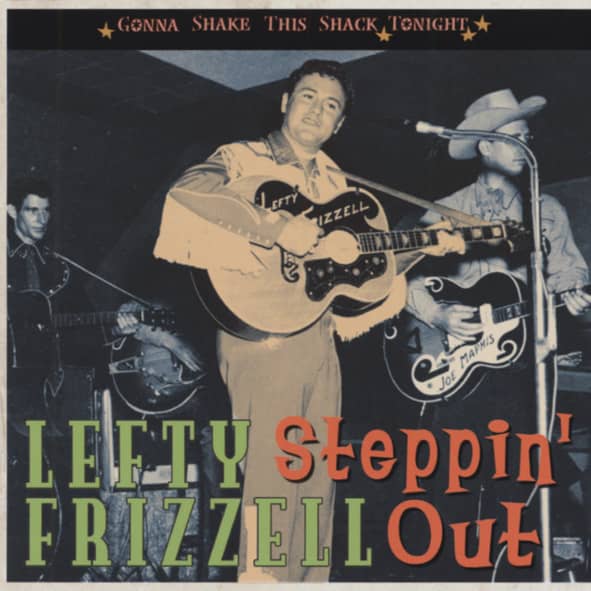