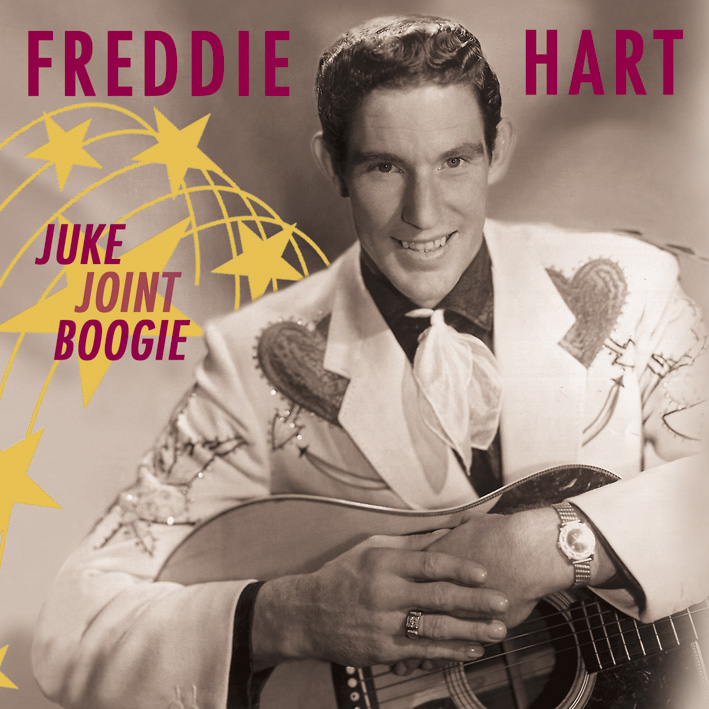 Freddie Hart will always be remembered in the annals of Country Music for his runaway 1971 #1 hit Easy Loving—in fact, most biographies of Freddie begin with that song and detail the many accomplishments that came after that—the eleven number one hits he penned, the numerous top 40 country hits that lasted until the late 1980s, the many Grand Ole Opry appearances.

But what most biographers fail to mention is that Freddie had one of the longest and most arduous climbs to the top of any country music star in history, having begun his recording career almost twenty years earlier. Dozens of fine and deserving hillbilly, rockabilly and stone country singles and albums were issued before Freddie would have a major hit, a fact that remains like an old bruise with Freddie to this day.

When told that the compilation I was interviewing him for was to be the early Capitol and Columbia sides from the 1950s and early 1960s, Freddie's comment was "Son, I don't believe anybody remembers those records."  It took quite a bit of explaining that there were indeed a lot of collectors and fans out there who really liked these early recordings, but the pain on Freddie's face told of the struggle and disappointment that those early years must have held for him. Hopefully this compilation will dispel illusions that these records, simply because they were not huge hits, weren't some of the best hillbilly boogie and hardcore country discs to emerge from the West Coast in those formative years.

To understand the roots of Freddie Hart's music, it is imperative that one understands the roots of the man himself. His personal story is something that reads like a tale by Faulkner with its grim Southern gothic beginnings to its hard-earned chart-topping success story.

Freddie Hart was born Fred Segrest on December 21, 1926, in the small town of Loachapoka, Alabama. The town of Loachapoka is a short drive from Auburn, where wealthy, old money southern kids go to earn college degrees and train for the good ol' boys country club, but although it is close geographically, in culture and class Loachapoka might as well have been on another planet. The name Loachapoka itself is an Indian name that means "the place where turtles are killed."  The town's largest social event is the annual "Syrup Soppin' Day."  To this day it remains a place where the only way to get ahead is through hard, manual labor.

Freddie grew up as poor as dirt, in a family of ten boys and five girls ("Our outhouse had three holes," he recalls), working in the fields mostly as sharecroppers, picking cotton and doing whatever kind of labor the family could find to put food on the table. It was a hard life, but Freddie has many good early memories of the family singing and playing music together, and listening to the Grand Ole Opry every week on their battery powered radio. As with many southern families, music played a large role in easing the burdens of everyday life, and Freddie began playing the guitar at the tender age of five, at first using a guitar fashioned from a cigar box and wire from a Model T car.

Freddie was self-admittedly the 'black sheep' of the Segrest family, having run away from home at the age of 7. At the age of 12 his parents enlisted him in the CCC (Civilian Conservation Corps). This was a Roosevelt-sponsored program initiated in the Great Depression that took in idle, young boys (read: juvenile delinquents whose parents could not control them) to help reforest the land and labor in civil rebuilding projects. Freddie went willingly because "at least in the CCC Camps I'd have enough to eat,"  something that wasn't guaranteed at home. It was a rough and tumble year for the youngster, living in faraway camps for months at a time. If he didn't know how to fight before he went in, he came out a man ready to take on the world.

When Freddie returned from his year-long stint with the CCC, he found it hard to re-adjust to farm life. Having never owned a new item of clothing, and tired of threadbare hand-me-downs, Freddie recalls seeing an enlistment poster for the Marines and thinking that he wanted a sharp blue suit, just like the one donned by the officer in the recruitment poster. Only 14 years old, his parents agreed to lie about their son's age in order to help him enlist, just in time for World War II. The great irony is Freddie spent his entire time in the service wearing green battle fatigues, never getting to see himself in the tailored, blue suit which had prompted his enlisting.

Freddie was shipped out to fight in the Pacific, and he spent three years and five months serving in Guam and Iwo Jima. Although he must have seen some bloody frontline action, Freddie doesn't like talking about it, and has mostly fond memories of his experiences in the Armed Services. He recalls playing guitar and singing with his fellow enlisted men, playing in front of an 'audience' for the first time, doing gigs at officers' clubs at night. He also used his time in the Pacific to become schooled in the martial arts, becoming a black belt in both jujitsu and judo.

Like many young men returning from the war, Freddie came back to Alabama in 1946 and found life there too boring to endure. The next few years found Freddie drifting throughout the South doing every odd job known to man, all the while trying to find opportunities in the music world.

Sought after Rockabilly Jiver - not easy to find these days on original 45rpm!
$12.17
more details