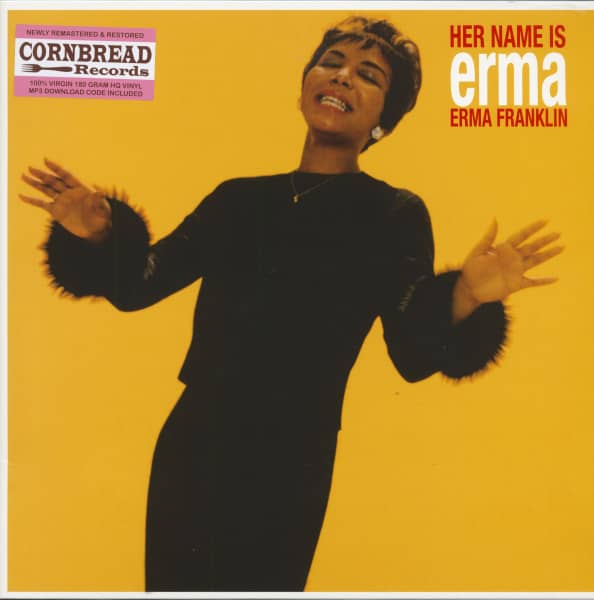 (Cornbread) 14 Tracks - Reissue of the original 1962 Epic album plus two bonus tracks - Limited, remastered 180g vinyl edition - MP3 download code included.
-
'When i sing, i like to know the words particularly well. Only in that way I can give a tune a fuller conception and communicate to an audience. If you really mean what you're singing, if you really know what you're going into, then you don't have to hqd back at all!'. These are the words of Erma Franklin, the freshest, most exciting vocalist to come along this year.

Like her sister, the now-famous Aretha Franklin, Erma came from the ranks of Detroit's New Bethel Baptist Church choir. Last year, Aretha made a remarkable debut as a singer and pianist. This year, we are again indebted to New Bethel: another of Reverend C. L. Franklin's daughters comes of age. Erma is extraordinarily versatile. Her style ranges from the lush ballad, Time after Time, to a hard-kicking blues, Each Night I Cry, (which, incidentally, was written by still another Franklin, 17-year-old Carolyn). Erma has the taste and intelligence of a superior 'pop' singer, as evidenced by her version of The Man I Love. And she is fortified with the deep fervor so essential for the blues-just listen to It's Over, on which she is solidly backed by the Helen Way gospel group. To many people, she will sound like a jazz singer, notably in the beauti-ful Billie Holiday classic Detour Ahead.

Erma was born in Shelby, Mississipi 23 years ago. When she was four years old, the Franklin family moved to Buffalo; when she was six, they pulled up again and moved to Detroit, where her father became the minister of New Bethel. The following year, she became a regular in her father's choir. While attending Northern High School, Erma formed a vocal group called the Cleo-Patrettes. They sang rhythm and blues and soon made a name for themselves in the Detroit area, winning an all-city talent competition. Upon graduation fron high school, the group disbanded. Erma will probably make the ex-Cleo-Patrettes think of their old rhythm,m and blues days with Hello Again, What Kind of Girl and a song associated with the legendary Johnny Ace, Pledging My Love. After high school, Erma toured the country for two years in her father's gospel group.

'The tour was a lot of fun,' Erma recalls, 'but it was very tiring, because the majority of the shows we did were one-nighters. But it was an educational experience.' Two years ago, Erma decided to pursue a more orthodox education: she enrolled at Clark College in Atlanta, where she is now majoring in business administration. However, she continues to pursue her primary ambition: on weekends, she sings in an Atlanta nightclub. 'I want to sing', Erma says, 'because I think that's the thing I do best.'  (Billy James)

Piece Of My Heart

Piece Of My Heart

New York producer Bert Berns incorporated Latin progressions and tempos into some of his greatest soul triumphs: The Jarmels' A Little Bit Of Soap, The Isley Brothers' Twist And Shout, The Vibrations' My Girl Sloopy, The Drifters' One Way Love, Solomon Burke's Cry To Me. Erma Franklin's Piece Of My Heart, penned by Bronx-bred Bert and fellow uptown soul master Jerry Ragovoy, reflected that passion too.

Erma was Aretha's older sister, born March 13, 1938 in Shelby, Mississippi. Like Aretha, she sang at New Bethel Baptist Church, where their father, Rev. C.L. Franklin, preached his sermons. While attending Northern High School, Erma was a member of The Cleo-Patrettes, makers of a highly obscure R&B single for Joe Von Battle's J-V-B label in 1953. Her powerful father convinced her to turn down a later entreaty to record from Berry Gordy and Billy Davis, then hoping to launch their own label, so she could enroll at Atlanta's Clark College.

Aretha crossed over to the pop field in 1960, signing with Columbia Records, and Erma followed suit, debuting on its Epic imprint the next year. Like her celebrated sister, Erma did quite a bit of pop-oriented material for Epic. She debuted in '61 with a rendition of the standard Don't Blame Me, though little sister Carolyn wrote her third Epic offering, Each Night I Cry, and she revived Lloyd Price's Have You Ever Had The Blues in '63 (Franklin sang with his orchestra for a time). Her Al Kasha-produced Epic LP 'Her Name Is Erma' contained an array of pop chestnuts and three Johnny Ace remakes.

After a '65 one-off for Price's Double-L logo, Berns signed Franklin to his Shout logo, a subsidiary of Bang Records, which he'd launched with Jerry Wexler and the Ertegun brothers. Erma's 1967 Shout debut, an update of Jimmy Reed's blues Big Boss Man, was followed by the spine-tingling Piece Of My Heart, boasting a magnificently controlled Franklin reading totally at odds with Janis Joplin's histrionic cover. Piece went to #10 R&B and #62 pop, though Erma's two Shout follow-ups missed entirely.

Gravitating to Chicago producer Carl Davis after Berns' untimely demise, Erma cut Gotta Find Me A Lover (24 Hours A Day), a 1969 R&B chart item on Brunswick. But three encores went nowhere, and during the '70s she began to put that college education to good use. Franklin died September 7, 2002 of throat cancer at age 64.