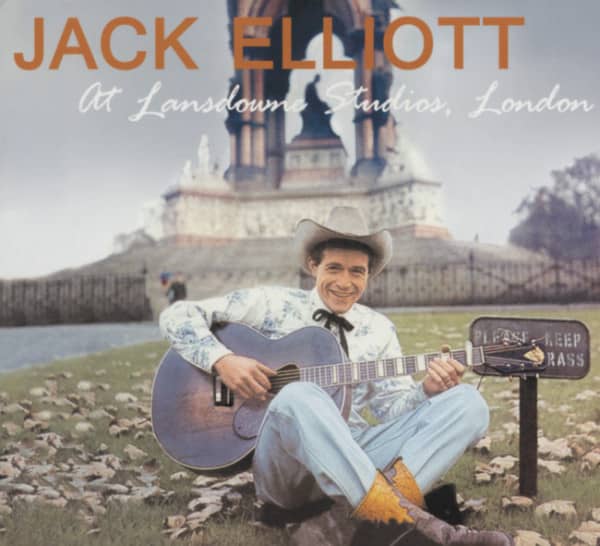 He was idolized by Bob Dylan- a true original Folk Era hero!H introduced American folk music to England and Europe!Includes 8 previously unissued recordings from the legendary Lansdowne Studio sessions, including duets with Derroll Adams. Rambling Jack Elliott might have been a doctor's son from Brooklyn named Elliott Adnopoz, but he looked and acted the part of the ramblin- gamblin- folk hero. He toured with Woody Guthrie, Pete Seeger, and all of the original folk era greats. In 1955, Jack Elliott came to England, and began his recording career there. These recordings effectively jumpstarted the folk music craze in England, introducing the work of artists as diverse as Woody Guthrie and Jimmie Rodgers to European audiences. 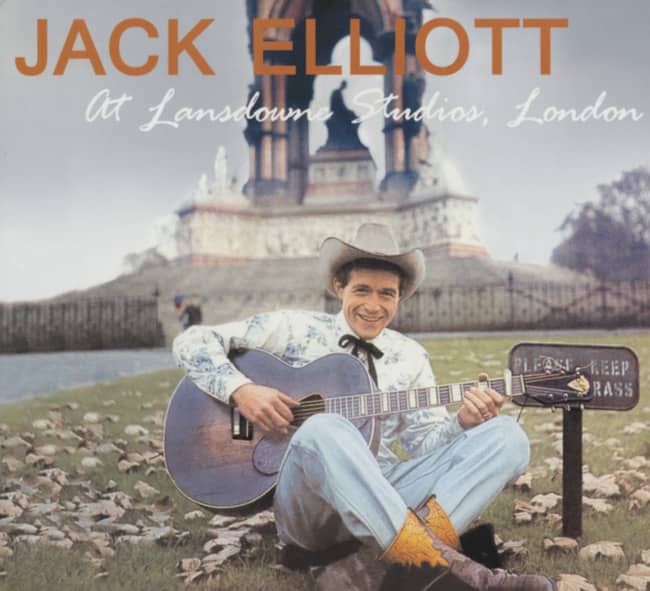 Passing through New York City on the afternoon of May 30, 1995, Ramblin' Jack Elliott, the American folksinger and fabled protégé of Dust Bowl balladeer Woody Guthrie, made a detour to the Bronx. Elliott was scheduled to visit Fordham University's radio station WFUV for an hour long call to promote his soon to be released new album the 'South Coast.' Print advertisements were touting 'South Coast',for which Elliott would win a Grammy, as Jack's 'First full-length release in 27 years!” even if this wasn't quite true (his previous solo album, 'Kerouac's Last Dream' was released in Europe in 1981, but would not see issue in the United States until 1997). To most Americans, the last Elliott album to see issue in the U.S. was 'Bull Durham Sacks & Railroad Tracks' released in 1970. Though the publicists' arithmetic was still off by a couple of years, their point was well made. The release of a new Jack Elliott album was a rare event worthy of celebration.

Ten of the twelve songs on 'South Coast' had first been recorded by Elliott in England during 1955-1960, when he'd established his reputation and, some might argue, his legend. Pastiches of American folk music were already flourishing in Great Britain on the eve of his arrival in the autumn of 1955, but Elliott's legendary busks throughout the United Kingdom, Western Europe, and nations tangential, helped introduce European audiences to an unfiltered catalog of songs by his mentor, Woody Guthrie, and of the American southwest.

That afternoon on WFUV Elliott talked a little about the new album, admitting, "It's just barely beginning to dawn on me that another egg has been laid." The program also featured Elliott's trademark digressions on the usual favorite subjects: Woody Guthrie, Bob Dylan, and Caesar, his beloved 'Labrador non-retriever' and road manager. During the conversation Elliott also touched on his time in England during the 1950s. This was a period that Elliott always seemed happy to recollect. Britons had warmly embraced 'Rambling' Jack right from the beginning. "They used to come to these clubs and really dig it," Elliott said. "I'd never sung to such appreciative audiences. It was truly in England where I became a 'professional entertainer.' I liked playing for my friends and whoever would listen, but I never thought of [music] as a way of life, a livelihood. I just wanted to be sailor, and a cowboy, and a truck driver, and a world traveler… and see it all. The guitar was the way to do it. The music was what paid for the gasoline and soup, coffee, hotel rooms. We bummed around Europe for five years that way, my first wife and I, on a motor scooter [playing] T.V. stations, radio programs, nightclubs, street corners, restaurants, cafes. Any way we could make it and every way we could make it. Just meeting people and having a good ol' time. It wasn't a big industry then… I was the first American folksinger to tour Europe."

Elliott has often, and understandably, looked back at his time in England with unabashed romanticism. In 1984, with interest in folk music as a commercial commodity almost entirely dormant, Jack would often recollect about the "really positive times"  he had experienced in Great Britain in the late 1950s. In an interview with the 'Providence Journal-Bulletin,' Elliott offered that audiences in England, "were really listening, hanging onto every word, drinking it all in. They were glad I was there, and I was glad I was there." Some two decades later, with his media profile revivified partly due to all the attention surrounding the documentary bio-pic 'The Ballad Of Ramblin' Jack,' Elliott admitted to a journalist from the 'Santa Fe New Mexican' that his career in music was entirely accidental. In the 1950s there was little money to be made in folk-singing, Elliott explained, acknowledging that he would not have made music his career had it not been for "the success I had in England." That success wasn't necessarily financial. "I [only] used to make six or seven pounds a night there, but I recorded my first […] albums on the English Topic label."

It's true that Ramblin' Jack Elliott's career as a recording artist blossomed in England. Prior to traveling with his first wife June to Europe in the autumn of 1955, Jack had been an infrequent visitor to the recording studio. Though he had recorded with Woody Guthrie and Blind Sonny Terry for Moses Asch in New York on January 18, 1954, Woody, suffering the effects of illness and strong drink, was no longer on top form. Only one song to date has seen issue from that session, an abridged version of Railroad Bill, released a half-century following its recording. It was also circa 1954 that Elliott first recorded a stark version of Guthrie's Pretty Boy Floyd for Jac Holzman's newly founded Elektra Records. That session was conducted under the most informal of circumstances in the kitchen of Holzman's Bleecker Street apartment and issued in 1955, alongside Elliott's interpretations of such outlaw ballads as Jesse James and Charles Guiteau, on the 10" album 'Badmen And Heroes.'

Elliott's recording status would change, almost immediately. Elliott had barely touched down in England when, through the intervention of expatriate American folklorist Alan Lomax and the leftist British Isles folksinger Ewan MacColl, he was contracted to record nine Guthrie songs for the Workers Music Association (Topic Records) of London in October 1955. Two songs recorded at that session, conducted in the parlor of MacColl's mother's home in West Prawle near Devon, were released on a 78 in the spring of 1956. On hearing the Topic 78, the dour critic Graham Boatfield sarcastically noted in 'Jazz Journal,' "On playing 'Pretty Boy Floyd' to a folk song enthusiast aged two-and-a-half, he said 'Woody Guthrie,' which sums it up pretty thoroughly. Jack Elliott is an American, so I am told; either he is imitating Guthrie or else they both come from the same part of the country, where all inhabitants speak, sing, and play guitar in the same style. The first probability is more likely."  The notion that Jack Elliott had become, in effect, Woody's doppelganger, was made plain in the spring of 1956 with the issue of the 8" album 'Woody Guthrie's Blues' on Topic. Featuring a trio of the balladeer's most potent talking blues songs(Talking Columbia Blues, Talking Dustbowl Blues, and Talking Sailor (Talking Merchant Marine)) two agit-prop classics (1913 Massacre and Ludlow Massacre), and Guthrie's famed road ode Hard Traveling, 'Woody Guthrie's Blues' was, as the liner notes promised, an uncompromising collection of songs about the people "who get kicked around, and the ones who hit back." In the estimation of Guthrie fan and folklorist John Greenway, Jack was, from the beginning, James Boswell to Woody's Samuel Johnson, "a young man who […] is possessed of real and original gifts of his own but who has chosen to occasionally submerge and sublimate them in the interpretation of the greater man."

It's unfortunate that throughout Elliott's tenure as a recording artist for the Topic Record Company, the outfit maintained no formal record keeping system. But evidence left behind in archived personal letters, personal reminiscences, and an assortment of reel to reel boxes at the British Sound Library, suggests that Elliott had been recorded in both formal and informal settings: at gatherings of MacColl's and Malcolm Nixon's 'Ballads and Blues' organization, at actual bona fide recording sessions, and for planned, but seldom realized, radio programs. Perhaps most famously, Topic engineers Dick Swettenham and Bill Leader were dispatched to Cowes on the Isle of Wight in the spring of 1956 to record Elliott, in somewhat romantic circumstances, aboard the Magnet, a neat copy of an original Bristol Channel Pilot Cutter where Elliott had taken temporary residence...