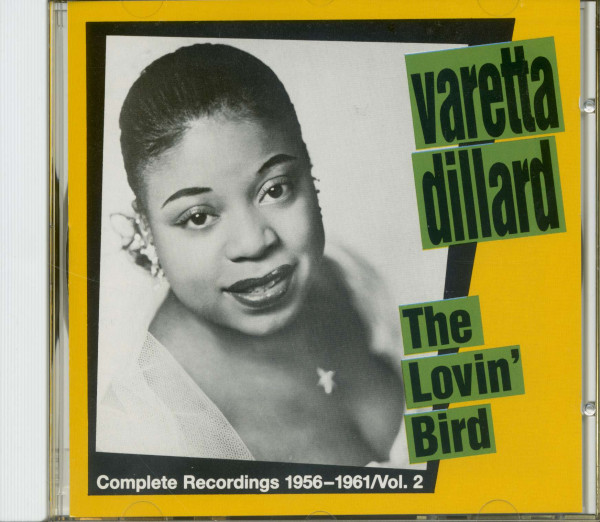 This article is deleted and can no longer be ordered!
Please inform me as soon as the product is available again.
P Secure bonuspoints now
Description
Learn more about Varetta Dillard
Review 0
Description
Varetta Dillard's name is rarely, if ever, mentioned alongside Ruth Brown and LaVern Baker among... more
Close menu

Varetta Dillard's name is rarely, if ever, mentioned alongside Ruth Brown and LaVern Baker among the great early thrushes of mid-'50s R&B ... and yet her voice and talent were certainly on the same plane as the aforementioned legends. Crippled since birth, Dillard's motivation came from her lifelong attempt to push her handicap to the background ... and from the encouragement she constantly received from fellow singers (and record executives).

After a trio of hits on Savoy, she left in '55 and for the next three years recorded for RCA and its Groove subsidiary. By 1959, she was recording for Herb Abramson's Triumph Records, and year later went over to MGM. These two volumes reprise all her recordings made after Savoy - 29 RCA and Groove cuts (including 9 unreleased) on Volume 1 and 22 Triumph and Cub sides (14 unreleased) on Volume 2. These - despite their relative lack of commercial success - were uniformly first rate R&B/rock 'n' roll recordings from one of the better vocalists of the era.

Titles include Mercy Mister Percy, Got You On My Mind, Skinny Jimmy, Darling Listen To The Words Of This Song, Jimmy (Tribute To James Dean), Whole Lot Of Lip, Good Gravy Baby... and many more! - (1989/BEAR FAMILY) 22 tracks, recorded between 1959 and 1961 for Triumph and Cub. 10 tracks are previously unreleased recordings. Last 30 copies available!

Learn more about Varetta Dillard
Signed by Savoy Records she had her first recording session with the company in September 1951.... more
Close menu
"Varetta Dillard"

Signed by Savoy Records she had her first recording session with the company in September 1951. Although her early singles were commercially unsuccessful, she was invited by Alan Freed to perform at the Moondog Coronation Ball in Cleveland on March 21, 1952. Because of concerns over crowd safety, the concert was shut down by the authorities after the first song, and in the event Dillard did not perform. However, her next record, 'Easy, Easy Baby', reached no. 8 on the Billboard R&B charts in July 1952. She then toured with Oran 'Hot Lips' Page and The Five Keys before the record company paired her with singer H-Bomb Ferguson for a series of duets. She had her biggest hit in mid 1953 with 'Mercy, Mr. Percy', which reached no. 6 on the R&B charts.

The song was nationally popular and became her theme song, but she had difficulty following it up. Her next major success, and final chart hit came in early 1955 when she recorded 'Johnny Has Gone', a tribute to singer Johnny Ace who had died as a result of an accidentally self-inflicted gunshot – the so-called 'Russian Roulette'. Dillard's recording was one of the most popular of several tributes to Ace and reached no. 6 on the R&B charts. She went on tour again and starred in the first Rock'n'Roll show in New Jersey in May 1955. She left the Savoy label in early 1956 and signed for the RCA subsidiary label Groove, where she issued several singles including a tribute to James Dean, 'I Miss You Jimmy'. In 1957, she moved from its subsidairy to the mother label RCA Victor.

With the producers Jerry Leiber and Mike Stoller she recorded several tracks backed by The Cookies but finally again unsuccessful commercially. She was dropped by the label in early 1958. She went on to record for the Triumph label set up by Herb Abramson of Atlantic Records fame. Then she moved to MGM's subsidairy Club Records. Her last recordings were done in 1961. 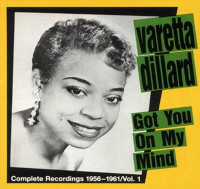