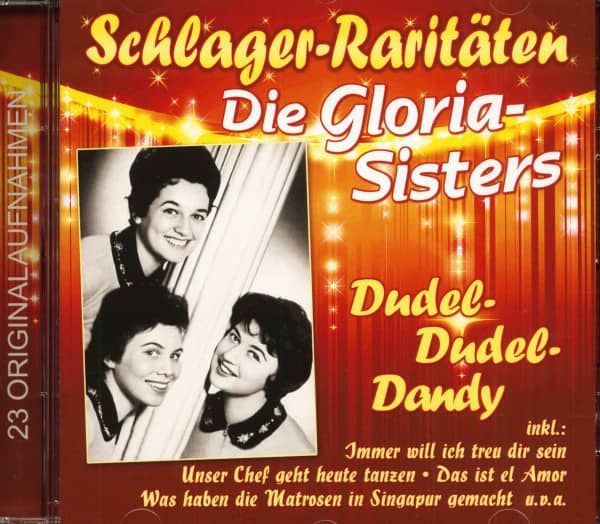 (MusicTales) 23 tracks
The Gloria Sisters were founded in Vienna under the name Die Floridas. The founding members were Inge Buchner, Susanne Adorjan and Hedi Prien. At times Helga Schramm also sang in the group.
From 1954, when they got a recording contract, the group called itself Gloria-Sisters to avoid confusion with a male singing group called Die Floridas from Berlin. As Glorias-Sisters, the trio released their first single Rund um die große Liebe in 1954. In 1956, Die Gloria-Sisters had their biggest success with Dudel-Dudel- Dandy. The title took 28th place and stayed in the German charts for 4 weeks. In 1958, the single Links - Rechts appeared under the name Die drei Glorias. From 1959 they finally operated as Die Glorias.

Hedi Prien continued with Trixie Kühn as Honey Twins, until she went on to have a solo career as Andrea Horn. Inge Buchner released many more records with various vocal groups, as well as duets with Rudi Hofstetter and Rudi Kreuzberger. Susanne Adorjan also recorded several solo records and worked as a background singer for Peter Kraus and Lolita, among others, before joining the Rosy Singers.