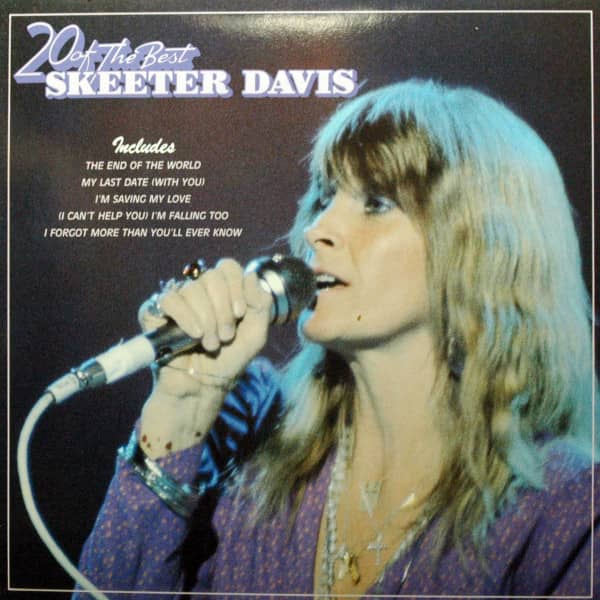 Skeeter Davis: 20 Of The Best

Over the last ten years a number of female American artists from the country and western field have achieved popularity with a far wider international musical audience. Among the most obvious examples are Tammy Wynette, Dolly Parton, Crystal Gayle and Billie Jo spears, in the language of the music industry their recordings have ‘crossed over’ to gain huge sales in the pop world, while retaining their share of attention in the traditional country market. One of the first female performers to achieve this success was Skeeter Davis and, in 1963, her million selling recording of 'The End Of The world’ made her a star on both sides of the Atlantic.

Skeeter Davis, whose real name is Mary Francis Penick, was born in Dry Ridge, Kentucky on December 30 1931, the first of the Penick family's seven children. She grew up working on her parents’ farm and, whenever time allowed, she listened to country music on the radio. Among her favourite performers were the legendary Carter family and the father of bluegrass music, Bill Monroe — a star of The Grand Ole Opry which was broadcast on Nashville's WSM station. when Skeeter Davis was sixteen the family moved from the farm to a suburb of Covington, Kentucky, it was there, in school, that she met Betty Jack Davis (b. Corbin, Kentucky March 3, 1932), another keen country music fan. Finding that their musical tastes were similar the girls started to perform as a duo, calling themselves the Davis Sisters. They sang locally at church and school functions and their popularity led to engagements on a number of radio stations including WLEX, Kentucky, WJR Detroit, WCOP Cincinnati and WWVA, west Virginia. They graduated to television world on WKRC-TV in Cincinnati and secured a recording contract with Fortune.

In the early Fifties they signed with the large RCA Victor organization, with whom Jimmie Rodgers and the Carter Family had begun their legendary careers. On August 2, 1953 the two girls were travelling from a personal appearance in wheeling when their car was involved in an accident, Betty Jack was killed and Skeeter Davis was seriously injured. Ironically, the record they had been promoting, 'I Forgot More Than You'll Ever Know’, entered the country charts the following week. It reached the coveted Number One spot and remained on the chart for over six months. when she recovered Skeeter fulfilled some engagements with Betty Jack's sister, Georgie, but soon afterwards she retired from the music business.

ln the late Fifties RCA executive Steve Sholes and producer Chet Atkins persuaded Davis to start recording again. Soon afterwards Cash Box nominated her The Most Promising Female vocalist and in 1959 she found herself back on the US Billboard Country charts with Set Him Free and Homebreaker (both 1959). In 1960 she had two more hits with Am l That Easy To Forget, and (I Can't Help It) I'm Falling Too, an ‘answer record’ to Hank Locklin's million selling Please Help Me I'm Falling. I'm Falling Too also reached the Billboard pop charts, a feat she repeated later in the year with My Last Date (with You), a vocal version of Floyd Cramer's million selling piano instrumental, Last Date.

In January 1963 The End Of The world entered the US Hot 100, it remained on the charts for over four months, reached the Number Two spot and won a Gold Disc with over a million sales. Over the next twelve months she enjoyed five more US pop hits including I'm Saving My Love, l Can't Stay Mad At You and Gonna Getta Along without You Now. These successes established Skeeter Davis as one of the most successful female artists on the American entertainment scene.

Throughout the Sixties, in addition to the impact she made on the pop world, Skeeter Davis underlined her popularity in country music circles with a string of US Billboard country Top 20 hits including The Hand You're Holding Now, Optimistic (1961), Where I Ought To Be (1962), He Says The Same Things To Me (1964), Fuel To The Flame, what Does It Take To Keep A Man Like You Satisfied (both 1967), There's A Fool Born Every Minute (1968) and I'm A Lover Not A Fighter (1969). She became a member of the prestigious Grand Ole Opry, made personal appearances throughout the world and released several successful albums which confirmed her versatility - among the best were written By The Stars,

Here's The Answer, Sings standards, Tunes For Two (with Bobby Bare) and Skeeter Davis Sings Buddy Holly, a tribute to the great ill-fated pop legend. Since 1963, when End Of The World reached the Top Twenty and spent three months on the hit parade, Skeeter has enjoyed tremendous popularity in the U.K. Her regular record releases have sold well and she has made several ovation winning performances at Wembley's International Festival of Country Music, where she has become a firm favourite. This collection, which has been specially prepared for her British fans, features twenty of Skeeter's US Billboard country Top Thirty successes.

The tracks span the period from 1953 to 1971 during which time they spent over two hundred and sixty weeks on the charts. Apart from Skeeter's biggest solo successes the selection also includes the Davis Sisters’ chart topper I Forgot More Than You'll Ever Know and Dear John Letter, which gave Skeeter and Bobby Bare a big hit in 1965. The collection, which features the work of such fine composers as Harlan Howard, Dolly Parton, Don Robertson and Hal Blair, the instrumental talent of many of country music's top sidemen and the slick production work of the celebrated RCA team that worked at the legendary and now defunct Studio B on 17th Avenue South is, above all, an excellent showcase for the unique vocal style that has kept Skeeter Davis at the top of her profession throughout four decades. Bill Williams

After the tragic death of her singing partner, Betty Jack Davis, Skeeter carried on, first with Betty Jack's sister and then as a solo performer. She signed on as one of Ernest Tubb's supporting acts and joined the Opry. Along the way, she divorced husband #1 and married WSM dee-jay Ralph Emery. Slowly, the hits began to come; the first was an answer to Hank Locklin's Geisha Girl. ProducerChet Atkins kept the faith during some lean years. Answer songs were in vogue, and Don Robertson and Hal Blair wrote their own sequel to Please Help Me I'm Falling. Floyd Cramer was on hand to replicate his piano part and Skeeter double-tracked her vocal to good effect. Hank Garland echoplexed his guitar and played fabulously understated fills around Skeeter and Floyd Cramer. While Robertson and Blair make little secret of the fact that they'd been cheating on their wives (and Robertson's 1960 divorce seemed to bear it out), the sequel was chocked full of family values. In the fall of 1960 I'm Falling Too reached #2 on the country charts and #39 on the pop charts.