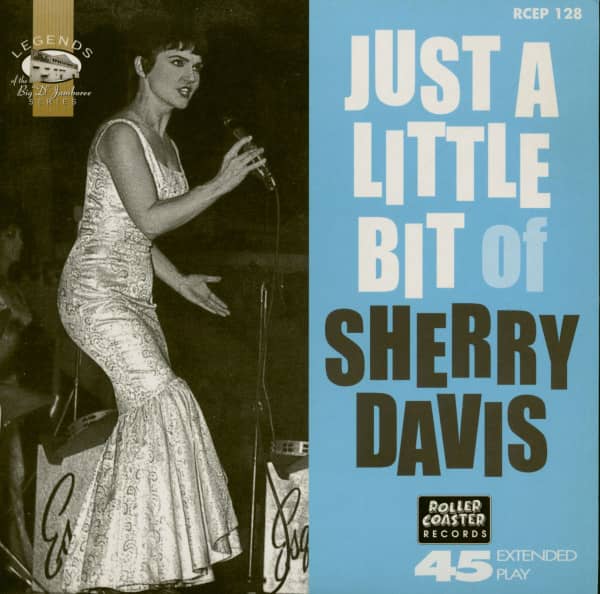 (Rollercoaster) 4 tracks - small center
-
Sherry Davis met Gene Autry when she was taken to visit his house as a child, and from that day she wanted to be a singer. Success in Amateur Nights and Talent Shows led Sherry to singing on the Cowtown Round-Up where she met Smokey Montgomery who helped her join Texo Ted Gouldy's Hired Hands about October 1949. The Hired Hands were effectively the Light Crust Doughboys in disguise and had a daily show on Radio WBAP, Fort Worth. About a year later Sherry switched to WBAP-TV's Bewley Barn Dance which she co-hosted with Darrell Glenn, who was replaced by Pat Boone when Glenn went on the road to promote his big hit 'Crying In The Chapel'.

Gene Autry encouraged Sherry to move to the West Coast about 1954. She recorded advertising jingles for American Music and played on the Foreman Phillips Show and Town Hall Party before becoming featured singer on the nationally syndicated Lawrence Welk TV Show. The American Music connection led to her disc debut 'God Speaks'/'Did You Stop To Pray This Morning?' (Crest 1005). Sherry returned to Dallas in 1955 and was soon a regular on the Big D Jamboree playing alongside the biggest names in music. She also hosted KRLD-TV's Opus '56 show.

In October 1956 Sherry became one of the very few artists ever to support a tour by RCA artist Elvis Presley; they played to over 60,000 people in 4 days. The following summer the Big D's Ed McLemore and Johnny Hicks set up a recording session, financed by Ray Winkler (Radio KZIP, Amarillo), which took place in Norman Petty 's studio overnight July 25-26, 1957. Petty hired the musicians and it wasn't until later that Sherry realised she'd been backed by Buddy Holly (lead guitar) and JI Allison (drums) who at the time were still a few weeks away from stardom with the Crickets. The other musicians were George Atwood on bass, Vi Petty on organ, the Picks (Bill & John Pickering and Bob Lapham) backing vocals and Jack Vaughan or Niki Sullivan on rhythm guitar. "Broken Promises" and "Humble Heart" made up the debut single on Winkler's Fashion label (1001) in late August.

Mitch Miller wanted to buy the masters for Columbia but the deal fell through when McLemore refused to relinquish the publishing rights; a devastating blow for Sherry as Miller would have been the perfect person to promote her career. The two songs have never been reissued until now and the original single is one of the highest priced discs to emerge from Texas. The two superb and previously unissued rockers on side one of this EP are a mystery. Sherry recognises her voice but cannot recall recording them. They were probably cut in Dallas about 1957. The classy backings may well be the Big D Jamboree houseband. Whatever the origins the two songs are among the best femme rockers to come out of Texas. This is just a little bit of Sherry Davis - further material by Sherry will appear on a forthcoming Rollercoaster CD, Highway 84.

Sherry later worked the Holiday Inn circuit and then spent almost a decade as a Las Vegas headliner singing for lounge-pop genius Esquivel before retiring from music in 1971. It's a pity we had to wait so long for Sherry's first release in the UK, but maybe it's not too late for her career to take off on this side of the Atlantic ....(John Ingman)