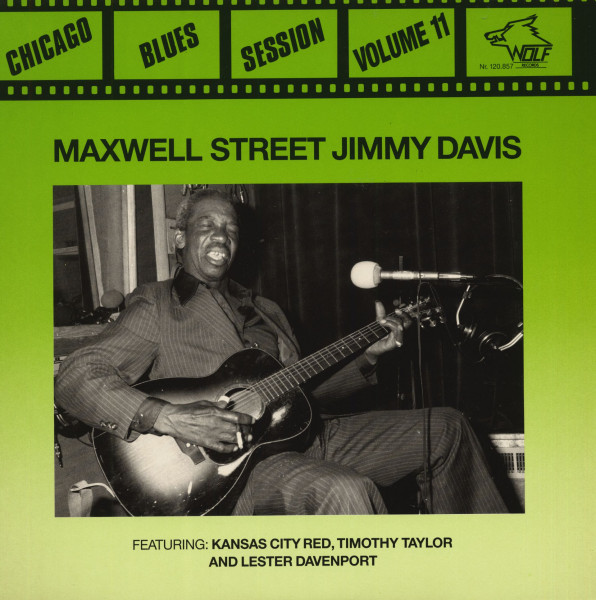 (Wolf Records) 8 tracks
One of the last of the Maxwell Street blues singers and guitarists who have always been typical of this area of Chicago where raw city blues originated and is still played on the street corners and gathering places of the South Side, the music of Maxwell Street Jimmy Davis is as original, raw and fresh as ever.

Born Charles Thomas in Clarksdale, Mississippi in 1925 (he can't remember his exact birth date), he learned to play the guitar self-taught at the age of fourteen.
He traveled extensively, joining Silas Green and the Rabbit Foot Minstrels, among others.

In 1946, Jimmy moved to Detroit, where he met John Lee Hooker and performed with him in various clubs. After moving to Cincinnati, Ohio in 1953, he went to the Greenville and Clarksdale, Mississippi area in 1957 and played on many radio shows, which brought him some local recognition.

In 1958, he made Chicago his home and settled on Maxwell Street.
There he often collaborated with King David on harmonica and later with Eddie "Porkchop" Hines on drums.

He even opened a restaurant "The Knotty Pine Grill" where he performed himself.
In 1965, blues explorer/producer Pete Welding heard him playing on the road and arranged recording sessions for the Testament and Elektra labels.

Wolf Records is very proud to present this important musician once again to a wider audience, on this album with his longtime friend Kansas City Red and Timothy Taylor on drums and Lester Davenport on harmonica