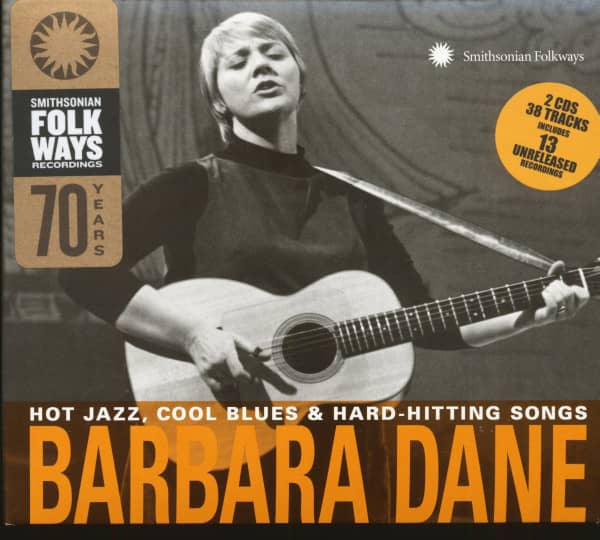 Please inform me as soon as the product is available again.
$28.80 *

Six of the 38 tracks from 1957-2014 used here show how convincing the singer already sounds on her own. Accompanied by the blues man Lightnin' Hopkins, the gospel sounding Chambers Brothers or other African American colleagues Barbara Dane even sounds unbeatable.

Of the more than two dozen Kent State records in the Vietnam Discography only a few mention the four shooting victims by name. Sandra Allison Jeffrey And Bill by Evoloution <<< IS THIS CORRECT SPELLING???  is one. Another is Barbara Dane's The Kent State Massacre.

Barbara Dane, born in Detroit on May 12, 1927, became a political singer at an early age. Shortly after World War II and when she was just out of high school she was already appearing at events promoting racial equality; the pre-'60s term for civil rights. By the early '50s she began writing and singing topical and folk songs. Still her early musical success was as a blues and jazz singer. In the '60s she was present at most of the big civil rights and anti-war demonstrations.

Dane made a number of important contributions to music of the war. In 1969 she and her husband, the journalist and activist Irwin Silber, compiled 'The Vietnam Songbook,' a collection of more than 100 American and International protest songs. A year later she and Silber founded Paredon Records as an outlet for music of the 'liberation movements.' Some of the label's early albums include her own 'FTA! Songs Of The GI Resistance' [Paredon 1003] and 'We Say No To Your War!' [Paredon 1015] by the Covered Wagon Musicians.

The Kent State Massacre is from her 1973 album 'I Hate The Capitalist System.' 'Allie' Krause, Sandy Scheuer, Bill Schroeder and Jeff Miller (the four fatalities at Kent State) are pictured as innocent bystanders, laughing and joking with troopers until without warning they are shot dead. Dane places their deaths in the context of a struggle against a "murdering system" that must be sunk in the darkest pits of hell.