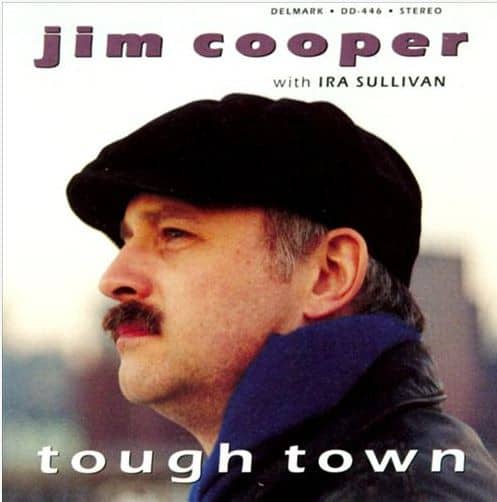 (1991/Delmark) 7 tracks,
The tough town that this CD's title refers to is Chicago, where Jim Cooper had played quite a bit in the 1970s and 1980s before Delmark recorded him as a leader in the early 1990s. Delmark had always been great about documenting Windy City jazzmen who were well respected locally but little known elsewhere, and one of the many examples was Cooper, a swinging, enjoyable vibist whose main influences were Bobby Hutcherson and Milt Jackson. One of Cooper's greatest assets on this decent post-bop/hard bop release is multi-hornman Ira Sullivan, who sticks to the tenor sax this time and brings a lot of charisma to material ranging from Charlie Parker's "Cheryl" to such Cooper originals as the sophisticated "Waltz for Betty" and the Hutcherson-ish title song. Other Chicago residents on board include pianist Bob Dogan, bassist Dan DeLorenzo and drummer Charlie Braugham. Although Tough Town didn't make Cooper a big name internationally, it was nice to hear him documented on CD.(AllMusic)