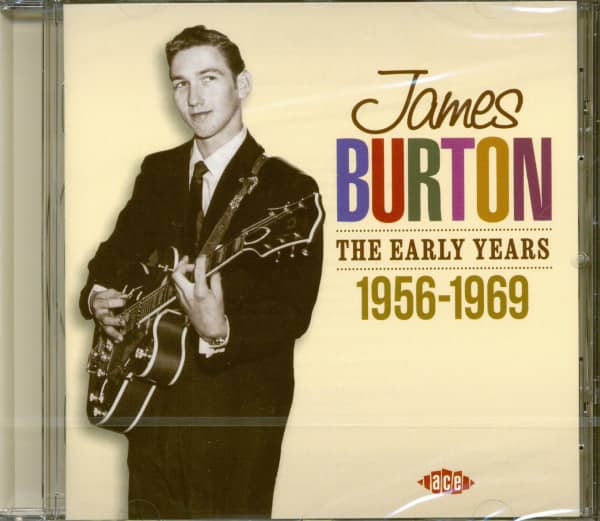 The story of James Burton’s early years told in this fine new compilation revolves around fast recognition of his talents by key US musicians who witnessed the teenager’s playing enhancing records with distinctive and memorable licks. A similar recognition occurred in far off North London in 1967 when I began to track down albums on which Burton featured for another precociously talented guitarist, Richard Thompson, who during the early days of Fairport Convention was soaking up so may diverse musical influences. Richard had heard Burton’s playing on some Rick Nelson tracks and enthusiastically asked if I could find as many of Rick’s albums on the Brunswick label as possible. Amongst the ones located were “Spotlight On Rick”, “For You”, “The Very Thought Of You” and possibly the cream of the crop, 1966’s “Bright Lights And Country Music”. It was on the latter that Burton was the only musician name-checked by Rick, a most unusual accolade at that time. Having listened to the album with Richard, a swift return to the shop quickly secured a second copy for my own collection.

James Burton’s story really kicked off with his distinctive playing on Dale Hawkins’ ‘Suzie-Q’ in 1957, though earlier work is included here. Soon after he worked with producer Jimmie Haskell on enhancing key tracks from Bob Luman and Bobby Lee Trammel, but the next step up came when Haskell introduced him to Rick Nelson. Burton was still only 17 in 1958, but immediately became the cornerstone for Rick’s road and recording band as he entered his halcyon hit days. Having such a strong back-up guitarist must have given the shy singer a great deal of added confidence. James Burton was to Rick Nelson as Scotty Moore was to Elvis, and Hank Marvin to Cliff Richard.

With his work with Rick Nelson came credibility within the recording industry, allowing Burton to fully develop a session career that was every bit as important. The 60s saw him working with Lee Hazlewood, the Everly Brothers, Merle Haggard and even Buffalo Springfield on Richie Furay’s ‘A Child’s Claim To Fame’. Along the way he found time to be part of the Shindogs, the house band for the Shindig TV show, and a brace of their released tracks are also included. As Burton acknowledges, it can be quite easy for fans to miss much of his prolific work, including as it did playing with artists such as Nat King Cole, Ray Charles, Sinatra and Elvis. This comp not only begins to tell the story, but also illuminates the darker corners via rare recordings that are so beloved of collectors. A second volume is planned that will take in Emmylou Harris, Gram Parsons and Elvis, but for now let’s marvel at Burton’s journey from Shreveport’s Louisiana Hayride house band in 1957 to the later 60s when he was fully established as the guitarist that everybody wanted in their corner.

James Burton, like Roy Buchanan and Al Casey, was one of the group of influential rockabilly guitarists who survived through to the present with session work, and thus played a lnajor part in the West Coast country-rock scene of the Six-' ties and Seventies. He first appeared as a guitarist in Shreve-port, Louisiana, and recorded with Dale Hawkins whose `Suzie Q' on Checker was a rocilen'roll hit in 1957. The heavy, deliberate, and — for its time — very inventive guitar work enabled Burton to gain work on the West Coast and he soon joined the band of the young Ricky Nelson. Burton's `Sun-style' electric lead picking was an important factor in the success of Nelson's discs, and the solos on Waitin' In School', 'Believe What You Say' and 'Bucket's Got A Hole In It' were definitive statements of the Carl Perkins, Scotty Moore guitar school.

Burton remained with Nelson into the Sixties , and has guested on guitar with successive waves of post-Byrds country-rockers, including the new-style Everly Brothers, Mike Nesmith, Delaney and Bonnie and Gram Parsons. He cut a solo album for A & M. In 1969, he backed sent some demos to Pappy Daily, a veteran Houston distri-butor, who signed him to a recording contract and in 1957-8 he recorded two hillbilly singles under his real name for Mercury. In 1958, Richardson recorded a novelty song titled 'The Purple People Eater Meets The Witchdoctor' under his Big Bopper alias, but it was the flip, 'Chantilly Lace' which registered internationally, reaching the Top Ten in America and the Top Twenty in England.

He followed this in December, 1958, with 'The Big Bopper's Wedding' (a Top Thirty record in America) before he died with Buddy Holly and Ritchie Valens in a plane crash on February 3, 1959. Richardson's small legacy of recordings suggests that he was a talented songwriter - he wrote Johnny Preston's `Running Bear' for example - rather than an artist of any durability.