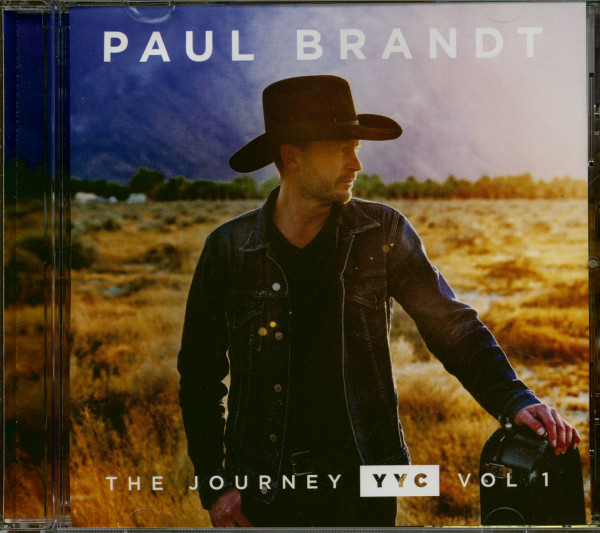 Paul Brandt is the most awarded male Canadian country artist in history. His 1996 debut RIAA certified Gold album Calm Before the Storm went on to sell one million albums internationally, propelled by the #1 single and wedding classic “I Do”. Stateside, his #5 and #1 charting songs “My Heart Has A History”, and “I Do” were the first to chart by a male Canadian Country artist on the US Billboard Top 20 since 1976.

Paul’s new project kicked off with the single release of the song “The Journey” August of 2017. A reflective song about the risks and rewards of embarking on an adventure. The follow-up single is a pop-infused anthem, which Paul says gelled quickly. “I greatly respect the co-writers on this song, so working with Seth Mosley and Ben Stennis was a dream come true for me. The more we got to know each other, the more it was clear that our wives are incredible inspirations to us, each in their own unique ways. We wanted to write a song that would celebrate them and the thankfulness we have for being in their lives. Once we began moving in that direction with the song, it kind of started to write itself. I’ve found the best songs always do that; they ride the emotion and spirit of the idea.”

On the tail of this second single comes the long-anticipated release of The Journey: YYC Volume 1, the title for this new wave of Paul Brandt music. YYC Vol. 1 is a six song EP, and Brandt’s first music offering since his Juno Nominated collection Frontier. It’s name is derived from a self-penned tune on the EP,which sets the tone for Brandt’s most personal body of work to date. “There’s a song on this first playlist of songs called ‘YYC BNA’, says Brandt from his studio in rural Alberta. “It’s a really special one to me. Bittersweet reflections on the trip from that YYC Calgary airport to Nashville’s “Berry Field” BNA were a catalyst for some of the spirit of this project. Calgary and Nashville are the only places I’ve ever called ‘home’, and those two cities bookend my journey in life so far.”

Produced by Brandt and long-time collaborator Ben Fowler along with Full Circle Music’s Seth Mosley and X O’Connor, this multiple GRAMMY Award© winning team presents a collection of songs spanning from singer/songwriter to outlaw and traditional all the way to today’s pop influenced Country Music. His 11 career albums have spawned hit singles, multiple Album of the Year awards, gold, platinum, and multi-platinum performances. According to Nielsen BDS, of the top 25 Canadian Country songs, 6 were released by Paul Brandt, and his song “My Heart Has a History” is the most played Canadian Country song since the chart began. Paul is also the most played Canadian Country artist on Country Radio in history (Nielsen BDS). He has had 26 top ten songs at Canadian Radio.

His song “For You” (Brandt/Rosen) was selected to promote the 2002 major motion picture We Were Soldiers, and was performed by Dave Matthews and Johnny Cash. In 2015, Canadian Independent Music Association celebrated Paul’s reaching “Road Gold Status” as a top headliner and major box office draw in Canada, and his most recent EP Frontier was nominated for Album of the Year at The 2016 Juno Awards. The hit single “I’m An Open Road” from that collection was recently certified Gold.

In 2017 , Paul Brandt was inducted into the Canadian Country Music Hall of Fame & Western Canadian Country Music Hall of Fame. As a recipient of the Queen’s Diamond Jubilee award, and numerous other national and regional humanitarian nods, Paul is committed to practically meeting the needs of the poorest of the world’s poor through his Buckspring Foundation. A proud champion of The Trans Canada Trail, Paul is dedicated to creating and supporting spaces for respectful discussion and fostering meaningful community through his artistic platform.

Also currently serving as Mount Royal University’s “Storyteller in Residence” at the Bissett School of Business, Paul has been working with students to create business and social enterprise projects utilizing the Paul Brandt Brand.

Paul lives with his wife Liz and their two children on The Buckspring Ranch in the foothills of Alberta’s Rocky Mountains.