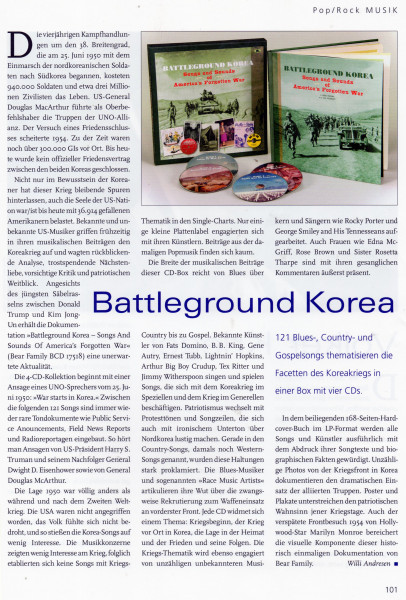 121 blues, country and gospel songs focus on the facets of the Korean War in a box of four CDs.

The four-year fighting over the 38th degree of latitude, which began on 25 June 195o with the invasion of South Korea by North Korean soldiers, cost the lives of 940,000 soldiers and about three million civilians. U.S. General Douglas MacArthur led the troops of the UN alliance as commander-in-chief. The attempt to reach a peace failed in 1954.

At that time, there were still over 300,000 GIs on site. To date, no official peace treaty has been signed between the two Koreas. Not only in the consciousness of the Koreans this war left lasting traces, also the soul of the US Nati-on was/is burdened until today with 36,914 fallen Americans. Well-known and unknown US musicians took up the Korean War early in their musical contributions and dared to look back-de analysis, comforting neighbor-love, careful criticism and patriotic foresight.

In view of the recent saber rasp between Donald Trump and Kim Jong-Un, the documentary "Battleground Korea - Songs And Sounds Of America's Forgotten War" (Bear Family BCD 17518) is unexpectedly topical. The 4-CD collection begins with an announcement by a UN spokesman on June 25, 195o: "War starts in Korea." Between the following 121 songs are always like the rare sound documents like Public Servi-ce Anouncements, Field News Reports and Radioreportagen built in. This is the announcement of US President Harry S. Truman and his successor General Dwight D. Eisenhower as well as General Douglas McArthur. The situation in 195o was completely different from during and after the Second World War.

The USA had not been attacked, the people did not feel threatened, and so the Korean songs met with little interest. The music companies showed little interest in the war, so no songs with war themes were established in the single charts. Only a few small record labels got involved with their artists. Contributions from the pop music of that time can hardly be found. The musical contributions of this CD box range from blues to country to gospel. Well-known artists from Fats Domino, B. B. King, Gene Autry, Ernest Tubb, Lightnin' Hopkins, Arthur Big Boy Crudup, Tex Ritter and Jimmy Witherspoon sing and play songs that deal with the Korean War in particular and war in general.

Patriotism alternates with protest tones and lines of songs that also make fun of North Korea with an ironic undertone. Especially in the country songs, then still called western songs, these attitudes were strongly proclaimed. The Blues musicians and so-called "Race Music Artists" articulate their anger at the forced recruitment to use weapons at the forefront. Each CD is dedicated to a theme: the beginning of the war, the war in Korea, the situation at home and peace and its consequences. The war theme is also worked up by countless unknown musicians and singers like Rocky Porter and George Smiley and His Tennesseans. Women like Edna Mc-Griff, Rose Brown and Sister Rosetta Tharpe are also extremely present with their vocal comments.

In the enclosed 168-page hard-cover book in LP format, all songs and artists are honoured in detail with their lyrics and bio-graphical facts. Countless photos of the war front in Korea document the dramatic deployment of the Allied troops. Posters and posters underline the patriotic madness of those days of war. Hollywood star Marilyn Monroe's late visit to the front in 1954 also enriches the visual component of this historically unique documentary by Bear Family. Willi Andresen