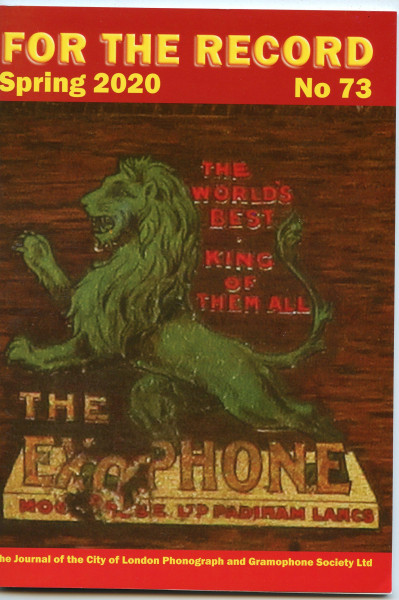 BOOK REVIEWS
DAS BILDERLEXIKON DER DEUTSCHEN SCHELLACK-SCHALLPLATTEN
Dr. Rainer Lotz first published his seminal work Grammophon-platten au der Ragtime Ara in 1979, since when he has produced a large body of work culminating in the magisterial, 44 CD, 2 volume Black Europe in 2013. It seemed impossible for him to produce anything that was even more impressive — but he has. This stupendous work is in 5 volumes with over 2200 pages, more than 10,000 colour pictures of record labels and countless black & white repro-ductions of trade-mark regis-trations and more. This book is not a discography; it has no catalogue reconstructions but it is, as described in the title, a picture encyclopaedia of German record labels. This does not mean that it con-tains information about record labels only sold in Germany; it embraces all records pressed in Germany ir-respective of the country of origin of the master.

Thus we get pictures and information on labels pressed for sale in countries all over the world, from the Irish Free State to Russia, from Argentina to the USA, from Morocco to New Zealand via Turkey, India, Thailand, China and Japan. So what do we get? Every label has details of known catalogue series, the type of repertoire, the name of the owner of the brand, the company whose masters were used and, of course, a picture of the label. In fact, we get pictures of every known variation of the label design and in the case of picture discs Dr. Lotz illustrates what must be almost the complete catalogue. He even gives details of trade-mark registrations for what he describes as 'phantom' labels, that is brand names that are not known to have been actually pressed for sale.

Entries vary in size, from the bare bones and one picture of the Teide Record label to the following entry of 44 pages and 75 label images about Telefunken, plus pictures of record covers, trade-mark registrations and more. It is fascinating to see how far the tentacles of early German brand names such as Beka, Homo-phon, Favorite, etc. reached, particularly with client labels. In the case of the more important labels Dr. Lotz has given rough dates for scores of catalogue series and, most in-terestingly, keys to the master number sequ-ences. In some cases, I was able, for the first time, to know where some of the discs in my own collection had been recorded. The text is all in German, but the basic facts are compre-hensible to all as each entry follows the same pattern — they only differ in size. An introduction in English would have been useful (plus a few other languages), explaining the key words of the basic entry and giving a brief run-down on the work's history. One just cannot sit down and read these vol-umes, they are much too rich to be digested in this way. One has to sit, relax and savour them in small doses and marvel at what a life-time's research has produced.

Take a look at the acknowledgements, over 25o of them from all over the world. The mind boggles as to how many letters, emails and 'phone calls were involved; and how on earth did he locate many of these people in countries not noted for discographical re-search? Not to mention that he was working full time to earn a living! This is a magni-ficent piece of work, surely his magnum opus? It's not cheap to buy and will be of interest to relatively few but it should be in the library of any institution with a recorded sound arch-ive or an interest in the subject. I can't see it being bettered but, as the author says, no research work of this type can ever claim to be complete, as evidenced by 53 pages of additions in volume 5, so there is a very faint chance that a second revised edition could appear in the future. For the price (approx. £340) and shipping details, contact: Bear Family www.bear-family.com To see what the book looks like, follow the link below.
Bill Dean-Myatt