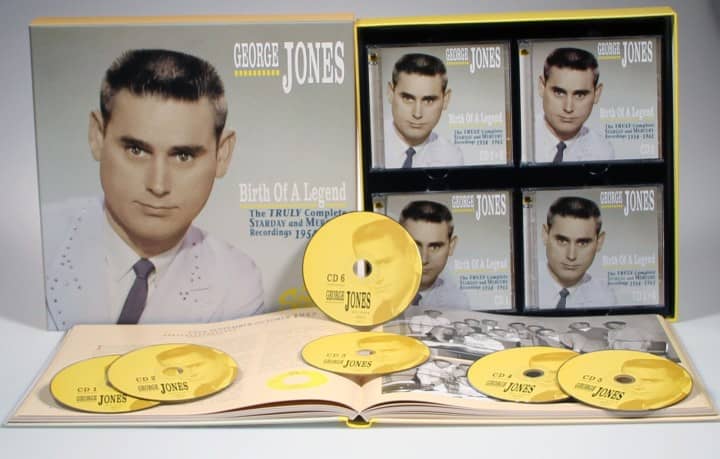 Birth Of A Legend

"If we all could sound like we wanted to, we'd all sound like George Jones." (Waylon Jennings)

Back in the late fall of 1985, when I was nearing the end of my four years at the University of Texas in Austin, I found a photograph on the floor of the elevator as I took it up to the 4th floor of the Communications building for my regular Tuesday night television production lab. The already legendary PBS series Austin City Limits was a decade into its long and storied run and it was taped live a couple of floors above our lab studios. So I knew why the photo was there. It was a snapshot, a lady -- probably younger than I am now but old enough to be my mother in the photo – scantily clad in blazing sunshine, standing proudly on the deck of a boat with "No Show Jones" emblazoned on the side. On the back was a note intended for Jones himself. Nothing lurid – I think it even mentioned the woman's husband – just a fan note letting him know how much he was loved and appreciated, and an open invitation to come relax on the No Show Jones if he should ever get out their way.

Jones was filming his second appearance on ACL that night, November 26, 1985, and I guess his reputation for missing shows, for excessive drinking, wild and sometimes downright mean behavior, was at its height in those days. No Show Jones. The Possum. I kept the photo as a curiosity for years, didn't know I didn't have it anymore, in fact, until I began looking for it as I started to pen these notes almost 30 years later. Did I give it away? Did it float out a second story window on a typically blustery Orkney day sometime after I moved to Scotland, like the cigarette damaged, hotel room photo of the mysterious Emmett Miller that Nick Tosches conjured only to lose in his ground-breaking, eye-and-ear-opening book 'Country?'

Given his reputation at the time and beyond, it's perhaps surprising that Jones figures only fleetingly in 'Country,' and then only in a discussion of the rockabilly records he cut in '56 as Thumper Jones. Tosches did get around to writing about Jones, with typical verve and intelligence, some years later, though not in book form, as he had memorably chronicled two other singular performers, Emmett Miller and Jerry Lee Lewis. Jones would have sat comfortably between Miller and Lewis on any book shelf, or a turntable for that matter. We're left instead with a facsimile of Tosches, Bob Allen's rather feverish Jones biography, 'The Saga Of An American Singer.'

If someone had told me in 1985, as I pocketed that discarded snapshot (did Jones ever see it or did some crony just flick it away before it ever got to him?) that in 2015 I would be writing a detailed account of George Jones' early recording career, I would have shrugged it off as highly unlikely. Jones was by that time pretty well critically established as the greatest voice in country music, certainly in the post Hank Williams era if not of all time, and there was also a growing aura of retro-coolness emerging around his early recording career – and not merely around his reluctant stabs at rockabilly. Classic honky-tonk music was hip again, though it was probably originally an outgrowth of the British and European fascination with rockabilly that so often and perhaps inevitably led down other roads, to the styles that that music had sprung from. There was a catch, though: the honky-tonkers were only really worthy, only relevant and cool, if they had also rocked at some point, even if only fleetingly. Labels like Starday, where Jones had cut his teeth under the auspices of the legendary Pappy Daily, had begun to be obsessively collected and chronicled.

I, however, was only mildly interested. I had discovered western swing as a 13 year-old at the height of its 1970s revival, loved it about as much as anyone could love anything, but I was a little embarrassed at the time by the music's hillbilly pedigree, and always stressed its jazz, blues and pop elements when I talked about it to anyone. I was a Texan, but I was a city kid with intellectual pretentions. I remember rolling my eyes whenever someone like Conway Twitty -- with sculptured hair and glitzy stage attire, singing Joanie WasThe Girl Next Door or Hello Darlin'-- showed up on TV. This embarrassment about things country wasn't inherited. My parents were writers and had pretty sophisticated tastes -- my West Texas born-dad was into Opera, ballet, Mozart, but he also never shied from remembering and embracing where he was from. The car radio was invariably tuned in those days to the country music station WBAP and we watched 'Hee Haw' every week, though that was probably as much to see Misty Rowe and Nurse Goodbody as it was to see Buck Owens, Grandpa Jones and Junior Samples.

That wariness of country-ness was slow to leave me, but it did. I recall sitting in a hotel restaurant in Lincoln, Nebraska a couple of years before I found that No Show Jones snapshot, with the well-travelled and encyclopaedically knowledgeable musician Jim Colegrove. I was an underage roadie at the time for the Texas roadhouse blues and rockabilly group the Juke Jumpers, for which Jim was the front man. In an already long career (happily, continuing at this writing), Jim had played everything under the sun, from stints with the early rock 'n' roll group Teddy & the Rough Riders to a long one with Ian & Sylvia. But his earliest exposure as a kid in Dayton, Ohio had been to honky-tonk, and the first song a kid down the street with a guitar had taught him was Rocky Bill Ford's Beer Drinkin' Blues. Jim had seen it all, and I spent many hours picking his brain and talking about music. When I told him that night in Lincoln that I had never really gotten much into honky-tonk, he looked at me a minute, then said, "No. I guess not. You're probably still too young. In a few years, you'll get it."

He was right -- and that conversation stayed with me. I thought of it, among many other times, when an old musician leaned to me in a VFW hall some years later as a woman on stage sang a song that deserved so much more than the earnestly cheerful phone-book reading she was giving it. "You can tell, can't ya," he said, "that her heart's never really been broke."

I thought of it, too, some years later when I really heard George Jones for the first time after listening for something else all those years, and then I knew what the fuss was about: the raw beauty of it, the soul laid bare, the voice that sounded like it belonged to a man whose heart had been broken many more times than once.

By the time he died in 2013, George Jones was almost universally regarded as not only the greatest living country singer, but perhaps the greatest ever, surpassing even his idols Hank Williams and Lefty Frizzell. Where he had once provided plenty of ink for the press with his drinking, carousing and often public love life, he'd been living clean for some years. It would have been hard for many who witnessed him at his worst to believe that the man who had called his autobiography I Lived To Tell It All had indeed lived so long (if only he'd told it all).

Beyond the autobiography, written with Tom Carter, much else has been written about Jones, despite the feeling among many, even those who've written extensively about him, that beyond his drink-fueled exploits there wasn't much to actually say about him. The music spoke for itself, but to look at the man who created it for depth, for the well-spring of that unforgettable voice, was futile. In a largely very sympathetic profile, Nick Tosches used the word 'cipher' to describe him, but Roy Kasten, writing in the St. Louis weekly 'The Riverfront Times' in 2001, challenged this view. "What critics like Tosches misunderstand," Kasten wrote, "is that no personality, no intellect, no charisma -- no matter how extraordinary -- could ever measure up to the desolation, the penitence, the boundless love expressed by that voice. But Jones is not the vacant ‘inert mind' Tosches paints: In the early part of his career, Jones wrote such exquisite ballads as ‘Just One More,' ‘Don't Stop the Music' and ‘The Window Up Above'… Next to his greatest recordings -- you know them: ‘Walk Through This World With Me,' ‘A Good Year for the Roses' and ‘He Stopped Loving Her Today' -- even the work of giants such as Hank Williams and Lefty Frizzell sounds like no more than great country music. ‘The Grand Tour,' on the other hand, sounds like the score to the beginning and the end of the world."

When George Jones died in 2013, he'd been regarded as the greatest living country singer for at least 30 years. This is his complete early legacy. His own feelings about these years, not only the Starday and Mercury years but the tenures with United Artists and Musicor that followed, were tied in with many non-musical issues and were ambivalent at best. When it came to the Starday recordings in particular, he could be downright hostile about all of it -- and not just about the hated Thumper Jones rockabilly sides -- almost sneering at the notion of the notion of the ‘glory years' on Starday.

Many feel differently, though, and more than a few regard Jones' early recordings as his finest, possessing an unjaded passion and an unadulterated authenticity that would soon disappear. Even as his voice matured and his abilities deepened, something else was lost and many find it here. Jones called his autobiography 'I Lived To Tell It All.' Here is where" it all" began.