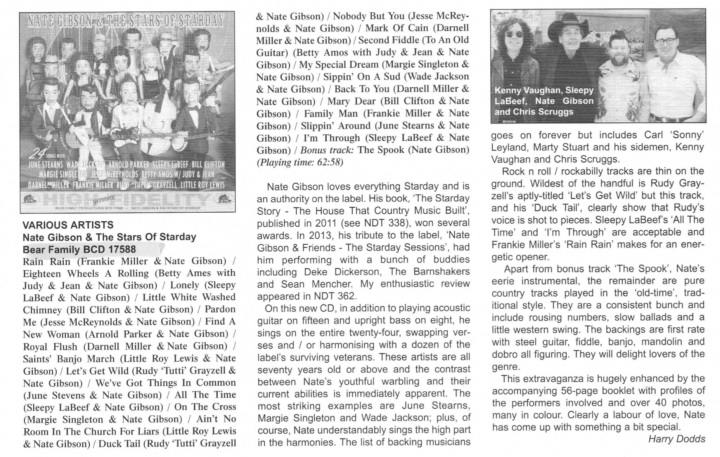 Nate Gibson loves everything Starday and is an authority on the label. His book. The Starday Story - The House That Country Music Built', published in 2011 (see NDT 338), won several awards. In 2013, his tribute to the label. 'Nate Gibson & Friends - The Starday Sessions'. had him performing with a bunch of buddies including Deke Dickerson. The Barnshakers and Sean Mencher. My enthusiastic review appeared in NDT 362. On this new CD. in addition to playing acoustic guitar on fifteen and upright bass on eight. he sings on the entire twenty-four, swapping ver-ses and / or harmonising with a dozen of the label's surviving veterans. These artists are all seventy years old or above and the contrast between Nate's youthful warbling and their current abilities is immediately apparent. The most striking examples are June Stearns, Margie Singleton and Wade Jackson: plus. of course, Nate understandably sings the high part in the harmonies. The list of backing musicians goes on forever but includes Carl 'Sonny' Leyland.

Marty Stuart and his sidemen, Kenny Vaughan and Chris Scruggs. Rock n roll / rockabilly tracks are thin on the ground. Wildest of the handful is Rudy Gray-zell's aptly-titled 'Let's Get Wild' but this track. and his 'Duck Tail', clearly show that Rudy's voice is shot to pieces. Sleepy LaBeef's All The Time' and 'I'm Through' are acceptable and Frankie Miller's 'Rain Rain' makes for an ener-getic opener. Apart from bonus track The Spook', Nate's eerie instrumental, the remainder are pure country tracks played in the 'old-time'. trad-itional style. They are a consistent bunch and include rousing numbers, slow ballads and a little western swing. The backings are first rate with steel guitar. fiddle, banjo, mandolin and dobro all figuring. They will delight lovers of the genre. This extravaganza is hugely enhanced by the accompanying 56-page booklet with profiles of the performers involved and over 40 photos. many in colour. Clearly a labour of love, Nate has come up with something a bit special. Harry Dodds