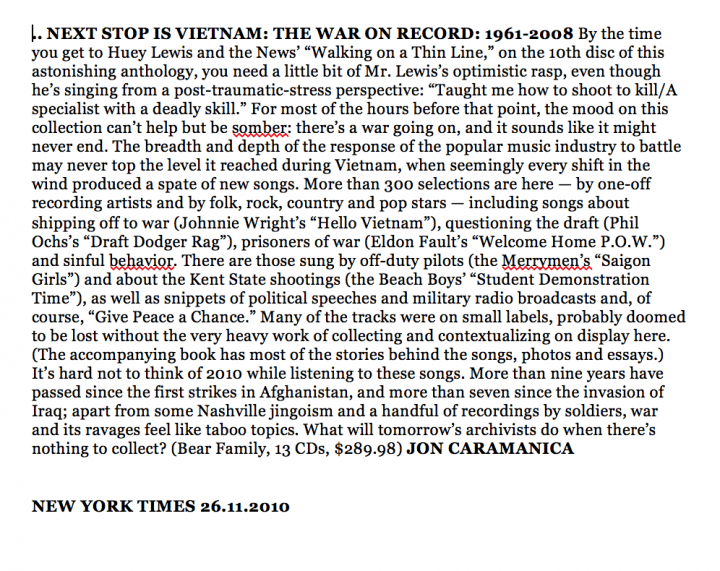 .. NEXT STOP IS VIETNAM: THE WAR ON RECORD: 1961-2008 By the time you get to Huey Lewis and the News’ “Walking on a Thin Line,” on the 10th disc of this astonishing anthology, you need a little bit of Mr. Lewis’s optimistic rasp, even though he’s singing from a post-traumatic-stress perspective: “Taught me how to shoot to kill/A specialist with a deadly skill.” For most of the hours before that point, the mood on this collection can’t help but be somber: there’s a war going on, and it sounds like it might never end. The breadth and depth of the response of the popular music industry to battle may never top the level it reached during Vietnam, when seemingly every shift in the wind produced a spate of new songs. More than 300 selections are here — by one-off recording artists and by folk, rock, country and pop stars — including songs about shipping off to war (Johnnie Wright’s “Hello Vietnam”), questioning the draft (Phil Ochs’s “Draft Dodger Rag”), prisoners of war (Eldon Fault’s “Welcome Home P.O.W.”) and sinful behavior.

There are those sung by off-duty pilots (the Merrymen’s “Saigon Girls”) and about the Kent State shootings (the Beach Boys’ “Student Demonstration Time”), as well as snippets of political speeches and military radio broadcasts and, of course, “Give Peace a Chance.” Many of the tracks were on small labels, probably doomed to be lost without the very heavy work of collecting and contextualizing on display here. (The accompanying book has most of the stories behind the songs, photos and essays.) It’s hard not to think of 2010 while listening to these songs. More than nine years have passed since the first strikes in Afghanistan, and more than seven since the invasion of Iraq; apart from some Nashville jingoism and a handful of recordings by soldiers, war and its ravages feel like taboo topics. What will tomorrow’s archivists do when there’s nothing to collect? (Bear Family, 13 CDs, $289.98) JON CARAMANICA