Press Archive - Next Stop Is Vietnam - Culture and Society 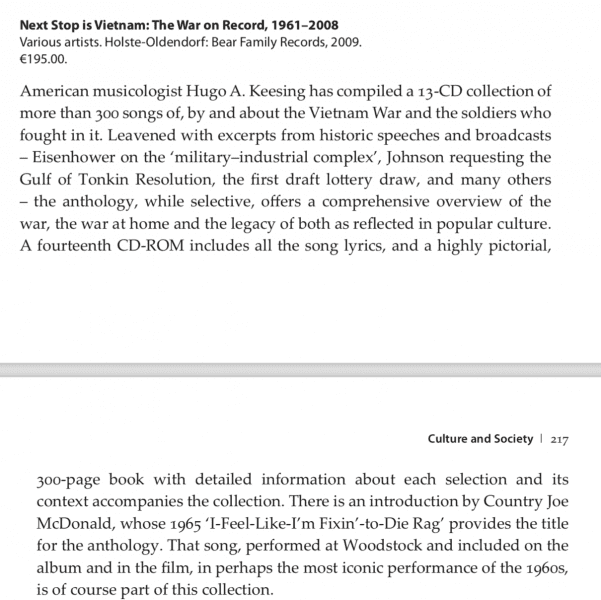 American musicologist Hugo A. Keesing has compiled a 13-CD collection of more than 300 songs of, by and about the Vietnam War and the soldiers who fought in it. Leavened with excerpts from historic speeches and broadcasts – Eisenhower on the ‘military–industrial complex’, Johnson requesting the Gulf of Tonkin Resolution, the rst draft lo ery draw, and many others – the anthology, while selective, o ers a comprehensive overview of the war, the war at home and the legacy of both as re ected in popular culture. A fourteenth CD-ROM includes all the song lyrics, and a highly pictorial,

300-page book with detailed information about each selection and its context accompanies the collection. There is an introduction by Country Joe McDonald, whose 1965 ‘I-Feel-Like-I’m Fixin’-to-Die Rag’ provides the title for the anthology. That song, performed at Woodstock and included on the album and in the lm, in perhaps the most iconic performance of the 1960s, is of course part of this collection.

For the most part, the other songs one might expect to be here, because of their commercial success or staying power, can also be found. There are several notable exceptions, such as Crosby, Stills, Nash and Young’s ‘Ohio’, which could not be included for licensing or copyright reasons. But only about 10% of the ‘no-brainers’ are missing for such reasons, and only about 10% of the collection is made up of obvious songs. The remainder are unreleased or hard to nd. Most valuable to the scholar will be the recordings made by soldiers ‘in-country’ on reel-to-reel tape. Despite 13 CDs’ worth of space to play with, Keesing had to pick from the more than 2,000 songs in his discography.

The experience of listening to this collection in its entirety, sequentially, is at once exhilarating and emotionally draining – and will be di erent for each listener according to age, nationality and personal experience of the war and its aftermath. But few will want to undertake such a Herculean task. It will be more rewarding to dip into the collection using the accompanying book as a guide, or to direct students to do likewise. For the la er exercise, there are ample possibilities for pairing songs together and matching them to syllabi. Historians and sociologists will also nd the collection a treasure trove of source material.

But the collection is not just of historical interest. While many songs have been wri en and recorded about the Gulf, Iraq and Afghanistan Wars, they have not had the same social impact as the popular music of the Vietnam era. This is probably due to changing technology and the Balkanisation of the music industry rather than more signi cant social reasons. But many of the earlier songs from this collection were re-released or re-recorded during those more recent con icts, some by the original artists. At least three of the songs in the collection were performed at Pete Seegar’s ninetieth-birthday concert in 2009, and many of the performers at that show have songs in this set. Many of the later songs use the Vietnam War as a foil for these more recent con icts.

Given that Keesing had so much material to choose from, it would be churlish to quibble about individual choices, but the Dixie Chicks’ cover of ‘Travellin’ Soldier’, about the ill-fated love between a high-school girl and a soldier who dies in Vietnam, would have been a perfect example of this la er category, given the context. It was at number 1 when, ten days before the invasion of Iraq in 2003, lead singer Natalie Maines introduced it at a concert in London by saying ‘we do not want this war, this violence, and we’re ashamed that the president of the United States is from Texas’. The resulting controversy and backlash nearly derailed the group’s career.

Keeting has expressed a desire to release a second volume, which would include ‘Travellin’ Soldier’, the other obvious omissions from this collection, and themes or categories not covered, such as non-American (particularly Vietnamese) perspectives, and humorous or comic songs. His discography continues to grow, and now contains over 4,600 songs, so there is certainly more than enough material to ensure that a second volume would not scrape the barrel but instead be on a level comparable to this magni cent collection.