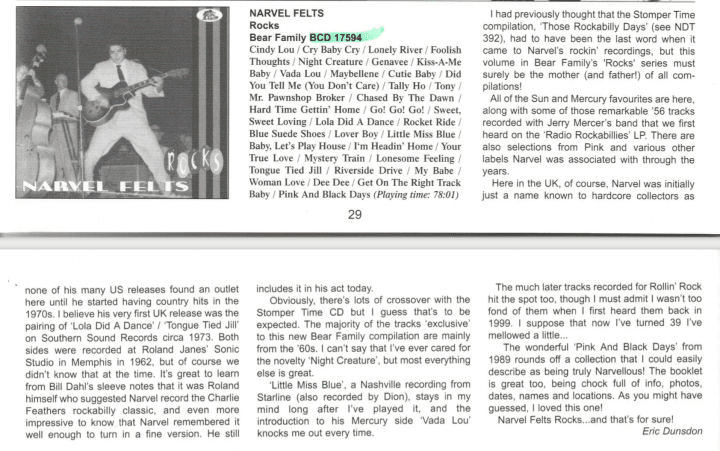 NARVEL FELTS Rocks Bear Family BCD 17594
I had previously thought that the Stomper Time compilation. 'Those Rockabilly Days' (see NDT 392). had to have been the last word when it came to Narvels rockin' recordings. but this volume in Bear Family's 'Rocks' series must surely be the mother (and father!) of all com-pilations! All of the Sun and Mercury favourites are here. along with some of those remarkable '56 tracks recorded with Jerry Mercer's band that we first heard on the 'Radio Rockabillies' LP.

There are also selections from Pink and various other labels Narvel was associated with through the years. Here in the UK, of course. Narvel was initially just a name known to hardcore collectors as none of his many US releases found an outlet here until he started having country hits in the 1970s. I believe his very first UK release was the pairing of 'Lola Did A Dance' / 'Tongue Tied Jill' on Southern Sound Records circa 1973. Both sides were recorded at Roland Janes' Sonic Studio in Memphis in 1962. but of course we didn't know that at the time. It's great to learn from Bill Dahl's sleeve notes that it was Roland himself who suggested Narvel record the Charlie Feathers rockabilly classic, and even more impressive to know that Narvel remembered it well enough to turn in a fine version.

He still includes it in his act today. Obviously. there's lots of crossover with the Stomper Time CD but I guess that's to be expected. The majority of the tracks 'exclusive' to this new Bear Family compilation are mainly from the '60s. I can't say that I've ever cared for the novelty 'Night Creature', but most everything else is great. 'Little Miss Blue'. a Nashville recording from Starline (also recorded by Dion). stays in my mind long after I've played it, and the introduction to his Mercury side 'Vada Lou' knocks me out every time.

The much later tracks recorded for Rollin' Rock hit the spot too. though I must admit I wasn't too fond of them when I first heard them back in 1999. I suppose that now I've turned 39 I've mellowed a little... The wonderful 'Pink And Black Days' from 1989 rounds off a collection that I could easily describe as being truly Narvellous! The booklet is great too, being chock full of info, photos, dates, names and locations. As you might have guessed. I loved this one! Narvel Felts Rocks...and that's for sure! Eric Dunsdon