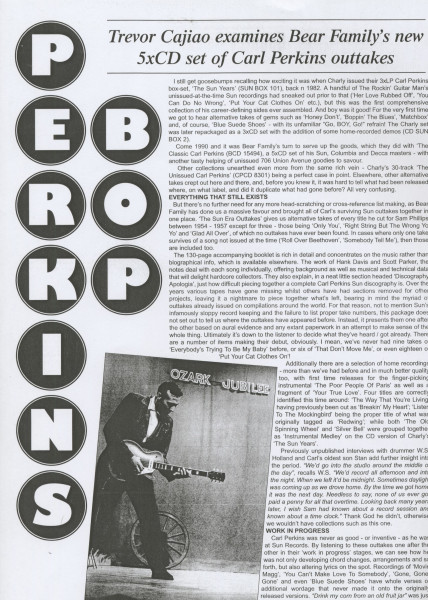 I still get goosebumps recalling how exciting it was when Charly issued their 3xLP Carl Perkins
box-set, 'The Sun Years' (SUN BOX 101), back n 1982. A handful of The Rockin' Guitar Man's
unissued-at-the-time Sun recordings had sneaked out prior to that ('Her Love Rubbed Off', 'You
Can Do No Wrong', 'Put Your Cat Clothes On' etc.), but this was the first comprehensive
collection of his career-defining sides ever assembled. And boy was it good! For the very first time
we got to hear alternative takes of gems such as 'Honey Don't', 'Boppin' The Blues', 'Matchbox'
and, of course, 'Blue Suede Shoes' - with its unfamiliar "Go, BOY, Go!" refrain! The Charly set
was later repackaged as a 3xCD set with the addition of some home-recorded demos (CD SUN
BOX 2).

Come 1990 and it was Bear Family's turn to serve up the goods, which they did with 'The Classic Carl Perkins (BCD 15494), a 5xCD set of his Sun, Columbia and Decca masters - with another tasty helping of unissued 706 Union Avenue goodies to savour. Other collections unearthed even more from the same rich vein - Charly's 30-track 'The Unissued Carl Perkins' (CPCD 8301) being a perfect case in point. Elsewhere, other alternative takes crept out here and there, and, before you knew it, it was hard to tell what had been released where, on what label, and did it duplicate what had gone before? All very confusing.

EVERYTHING THAT STILL EXISTS
But there's no further need for any more head-scratching or cross-reference list making, as Bear
Family has done us a massive favour and brought all of Carl's surviving Sun outtakes together in
one place. 'The Sun Era Outtakes' gives us alternative takes of every title he cut for Sam Phillips
between 1954 - 1957 except for three - those being 'Only You', 'Right String But The Wrong Yo
Yo' and 'Glad All Over', of which no outtakes have ever been found. In cases where only one take
survives of a song not issued at the time ('Roll Over Beethoven', 'Somebody Tell Me'), then those
are included too.

The 130-page accompanying booklet is rich in detail and concentrates on the music rather than
biographical info, which is available elsewhere. The work of Hank Davis and Scott Parker, the
notes deal with each song individually, offering background as well as musical and technical data
that will delight hardcore collectors. They also explain, in a neat little section headed 'Discography
Apologia', just how difficult piecing together a complete Carl Perkins Sun discography is. Over the
years various tapes have gone missing whilst others have had sections removed for other projects, leaving it a nightmare to piece together what's left, bearing in mind the myriad a outtakes already issued on compilations around the world. For that reason, not to mention Sun's infamously sloppy record keeping and the failure to list proper take numbers, this package does not set out to tell us where the outtakes have appeared before. Instead, it presents them one after the other based on aural evidence and any extant paperwork in an attempt to make sense of the whole thing. Ultimately it's down to the listener to decide what they've heard / got already. There are a number of items making their debut, obviously. I mean, we've never had nine takes of 'Everybody's Trying To Be My Baby' before, or six of 'That Don't Move Me', or even eighteen of'Put Your Cat Clothes On'!

Additionally there are a selection of home recordings: - more than we've had before and in much better quality too, with first time releases for the finger-picking instrumental 'The Poor People Of Paris' as well as fragment of 'Your True Love'. Four titles are correctly identified this time around: 'The Way That You're Living having previously been out as 'Breakin' My Heart; 'Listen To The Mockingbird' being the proper title of what was originally tagged as 'Redwing'; while both 'The Old Spinning Wheel' and 'Silver Bell' were grouped together as 'Instrumental Medley' on the CD version of Charly's
'The Sun Years'.

Previously unpublished interviews with drummer W.S Holland and Carl's oldest son Stan add further insight into the period. "We'd go into the studio around the middle ofthe day", recalls W.S. "We'd record all afternoon and into the night. When we left it'd be midnight. Sometimes daylight was coming up as we drove home. By the time we got home it was the next day. Needless to say, none of us ever go paid a penny for all that overtime. Looking back many year: later, I wish Sam had known about a record session and known about a time clock." Thank God he didn't, otherwise
we wouldn't have collections such as this one.

WORK IN PROGRESS
Carl Perkins was never as good - or inventive - as he was at Sun Records. By listening to these outtakes one after the other in their 'work in progress' stages, we can see how he was not only developing chord changes, arrangements and so forth, but also altering lyrics on the spot. Recordings of 'Movie Magg', 'You Can't Make Love To Somebody', 'Gone, Gone Gone' and even 'Blue Suede Shoes' have whole verses of additional wordage that never made it onto the original released versions. "Drink my corn from an old fruit jar" was just a tad too Rural for what became Carl's biggest seller and the song he's best remembered for to the public at large today. And how about the much-mangled lyrics that were ditched from it's flip, 'Honey Don t'?: "Sometimes you say you will when you don't, Tell me baby now do you or won't, Put your arms around me honey tease, Don't tell a lie no please, please, please..." This is the mind of a master craftsman at work, honing his art to create music that's entertained the world for over five decades now. And nobody made better rockabilly records than Carl Perkins. His Sun recordings are the very epitome of the genre. Other, more obscure artists may well be championed by long-time collectors, but there's no getting away from the fact that Perkins Bop is the best Bop there is. Go, Cat!

Unfortunately, like so many of his contemporaries, he was never able to recapture or replicate the originality, excitement and overall greatness of his first recordings. But it's all here and we get to witness the birth of so many future classics as the chronological nature of the compilation shows how certain numbers were developed as each take went down on tape. Take the Perkins / Cash composition 'All Mama's Children', for example, Carl's fifth release when paired with 'Boppin' The Blues' in May 1956. Six full attempts - from two different sessions - take us through the birthing process, beginning with a shuffle, almost 'Johnny Bernero' rhythm, followed by a stop / start intro (repeated during the song itself) that clearly had to be ditched. After that we're on more familiar ground; on our way to what was first presented as Sun 243. But there are numerous lyric changes between each take - exactly the kind of thing that makes packages of this nature a 'must have' item for hardcore collectors.

It doesn't all make for pretty listening. There are fluffed notes, wrong chords and some downright rough and raggy performances scattered about the five discs. But it's all part and parcel of what made Carl Perkins the great artist he was. Yes, I fully realise we were never ever meant to hear any of these outtakes, and in that respect if anyone is expecting polished, finished masters with every track then they better think again. What we have here is one of the greatest singer / songwriters of the period developing a sound that will be forever his; a sound that still sends shivers down the spine and gets the blood pumping all these years later.

'Everybody's Trying To Be My Baby', 'Matchbox', 'Dixie Fried', 'Your True Love', 'Boppin' The Blues', 'Put Your Cat Clothes On'...just the very titles alone set the pulse racing and conjure up images of hepcats boppin' to a frenzied beat! But Carl was a superb country singer too, and in this field he scores so well with the likes of 'Turn Around , 'Sure To Fall' and 'Forever Yours'. One of my own personal favourite ballads here is 'Keeper Of The Key', Carl's version of the Wynn Stewart hit. More recent compilations have tended to include the rendition lifted from the Million Dollar Quartet shindig, but this more relaxed and stretched out version is the one first heard on the 1982 Charly box and is beautiful, with Carl and Jerry Lee interacting perfectly on a very understated performance.

Playing several takes of a song one after the other is never the best way to listen to anyone's catalogue, but at least it shows us how things developed and offers a fly-on-the-wall appreciation of
what went into building up the finished article. And in that respect this is a fascinating document of Carl Perkins' work during his period at Sun Records between 1954 and 1957. Any major Perkins fan simply cannot be without it.

However, I do have a few niggles and need to air them. The same old incorrect date for the recording of 'Glad All Over' gets trotted out again in the discography. As I've pointed out in these pages before, how could it have been cut on December 11th 1957 when the movie it's featured in, 'Jamboree', was already on release at that time? W.S. Holland even suggests that it might have been cut in New York, though surely he's thinking of where they shot the sequence for the movie as 'Glad All Over' is so obviously a Sun recording. On the same theme, the notes for 'Try My Heart Out' are just plain ridiculous. First of all, the claim: "it's far from certain it was cut at Sun". WHAT? It reeks of the 706 Union Avenue sound. You can hear the sound of the room, that unique sound that only emerged from there. The suggestion that it might be a home recording and the piano player may be Carl's wife, Valda, simply beggars belief. It's no home recording and the piano player is Jerry Lee Lewis. Why this is even questioned is beyond comprehension.

A little more time could have been spent on correctly captioning some of the photos in the booklet. The use of the word 'circa' where precise details are easily available is very sloppy and, it has to be said, not up to usual Bear Family standards for attention to detail. Still, it's interesting to see a couple of adverts for the mysterious 'Hawaiian Boy', a movie nobody ever seems to have seen - including any members of the Perkins family!

The sequencing of some of the tracks is a little strange too. For example, not all the home recordings are in one place. Things like 'Pink Pedal Pushers' and 'Your True Love' are placed before their studio outtakes, whilst the 18 tries at the legendary 'Put Your Cat Clothes On' from two different sessions (March and December '56) are grouped together to run simultaneously, giving the impression they were all cut at the same time.

None of these gripes detract from the music, of course. That speaks for itself and always will. Hearing it in such a 'warts and all' environment only strengthens my belief that what came out of that tiny studio on the corner of Union and Marshall will forever sound as fresh and vibrant as the day it was recorded. Rockabilly - in its purest, greatest, enduring form - was born in that very room. And Carl Perkins was its greatest exponent. Go, Cat, Go!