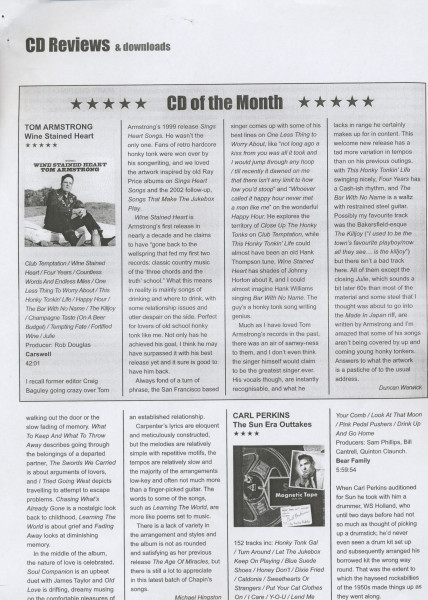 When Carl Perkins auditioned for Sun he took with him a drummer, WS Holland, who until two days before had not so much as thought of picking up a drumstick; he'd never even seen a drum kit set up and subsequently arranged his borrowed kit the wrong way round. That was the extent to which the hayseed rockabillies of the 1950s made things up as they went along.

The job of producer Sam Phillips was to listen to their endless flawed attempts at their songs before picking the one 'take' worthy of release. It's unsurprising that the outtakes collected in this five CD box far outnumber the 21 tracks issued during Carl's time at the label. What is surprising is that many of the discarded cuts are pretty darn good, and while casual fans won't want to sit through 18 consecutive versions of Put Your Cat Clothes On, the hardcore Sun Records archaeologists at whom this is aimed will find plenty to get excited about. According to Carl's son Stan, who is interviewed in the extensive booklet, "My dad was never so ashamed of anything he cut at Sun" as he was of Her Love Rubbed Off.

As Hank Davis and Scott Parker put it in the sleeve notes, none of the five takes would have passed a sobriety test. Yet the darkly compulsive minor-key rocker sounds ripe for revival by a neo-rockabilly band. Far worse is Carl's take on the old jump jive standard Caldonia. His growling vocal is virtually unlistenable. A pre-fame Jerry Lee Lewis plays piano on many tracks and may have suggested the 1930s vintage Sweethearts Or Strangers as it sounds very much like a Lewis country cut from the period, with his pumping piano to the fore and Carl adopting Lewis' whooping vocal style. The Killer's piano undertow and Carl's catchy guitar hook form a blissful marriage on the playful rocker You Can Do No Wrong while its Blue Suede Shoes-ish lyrics add their own fun: "You can rip my clothes, punch my nose... Baby, you can do no wrong." The song's such a delight that listening to five near identical versions in a row is no hardship at all.

Perkins experimented with different styles and sometimes sounds quite unlike the rocker we know. The slow acoustic guitar ballad Y-O-U features male backing vocals and an aching mid-song narration, but offers no threat to Elvis' Love Me Tender or Are You Lonesome Tonight. Lend Me Your Comb is limp and unconvincing teen pop from a father of three old enough to know better. Yet Perkins was always ready to bounce back from such lows with the exuberant Jerry Lee-like Look At That Moon or his cleverly worded commentary on contemporary ladies' fashion, Pink Pedal Pushers. A selection of home-recordings from the era complete a typically scholarly Bear Family release on an artist who's influence far exceeded his success . Douglas McPherson