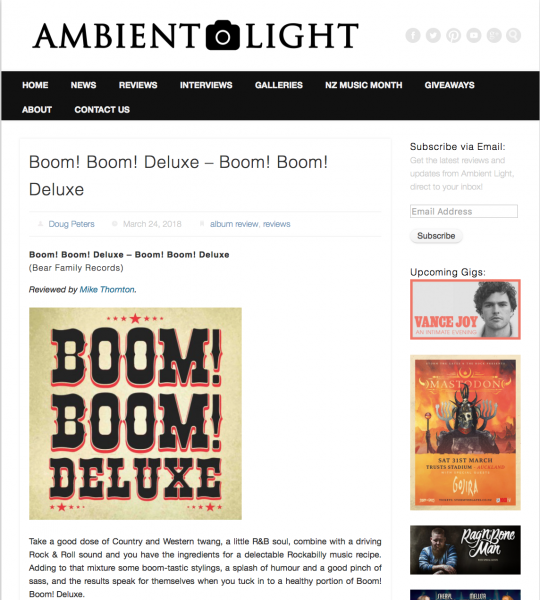 Take a good dose of Country and Western twang, a little R&B soul, combine with a driving Rock & Roll sound and you have the ingredients for a delectable Rockabilly music recipe. Adding to that mixture some boom-tastic stylings, a splash of humour and a good pinch of sass, and the results speak for themselves when you tuck in to a healthy portion of Boom! Boom! Deluxe.

Take a bite, heck, consume the whole thing in one sitting and you’ll be coming back for seconds, as I did, when tasting this Auckland-based Neo-Rockabilly outfit’s debut pressing. The self-titled Mini-LP was recorded in Auckland and mastered in no less than Nashville itself, containing 6 delicious tracks on 10” Vinyl and on CD. This recording is something of a milestone – not just for the band themselves as a debut, but also noted as a bit of an drought-breaker, this release the first in a fifteen year-long hiatus of Rockabilly releases from Aotearoa New Zealand. That’s a heck of a long time between drinks, and one that will be lovingly embraced by New Zealand’s growing legion of Rockabilly / Neo- Rockabilly’s fans.

Boom! Boom! Deluxe are presently part-way through a New Zealand Tour that offers up 17 dates and opportunities to catch them live, from Auckland to Christchurch and many points between. Right now that includes appearance at the Beach Hop Rock ‘n’ Roll Festival in Whangamata that doubles for the band as the Album Release Party. I can’t imagine a better setting to take in the band and their offerings, based on the tracks on this EP! At the Beach Hop they’ll be surrounded by lots of retro / vintage goodness in the form of cars, motorcycles, music, fashion & food – many of which feature as key themes through the songs’ content (although you may not encounter an actual Moonshine Man or a Swamp Thing!).

This EP does a great job of conveying the energy of the band – clearly one that thrives on live performance. They pack a pretty lively punch aurally, delivering a rollicking sound dripping with double-bass, electric guitar reverb, harmonica, and a thumping up-tempo drum-beat. Llead-vocals duties shared by D.D. Deluxe quite Elvis-esque at times; and the delectable Double-Bass pin-up, Hettie La Bombe. Whether you grab the vinyl or the CD, make sure you catch these guys live – they’ll knock your (bobby) socks off!