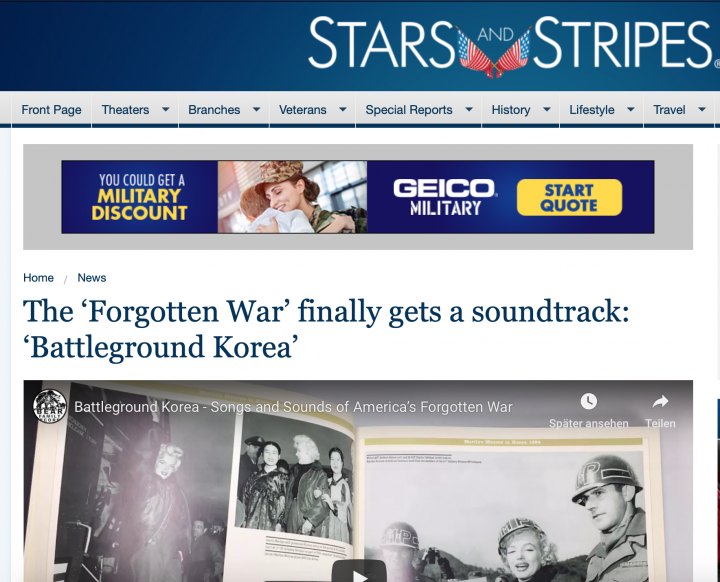 The ‘Forgotten War’ finally gets a soundtrack: ‘Battleground Korea’

Overshadowed by World War II and Vietnam, the 1950-53 Korean War is often called the “Forgotten War.” The same could be said for much of the music it inspired.

Music historian Hugo Keesing and co-producer Bill Geerhart seek to change that with “Battleground Korea: Songs and Sounds of America’s Forgotten War.” More than three years in the making, the anthology’s release in May was timely as nuclear talks with North Korea have renewed interest in the Cold War conflict.

The effort paid off Friday with a Grammy nomination for best historical record. The awards will be announced in February.

Keesing, a retired professor who taught popular music classes at the University of Maryland, tapped into a network of DJs and record collectors and dug deep in the Library of Congress, Billboard magazine and other archives to find at least 900 songs written about the war, though not all were recorded.

The box set, which comes with a glossy 160-page book and four CDs -- priced at just over $100 -- includes 121 tracks from artists such as B.B. King, Fats Domino, Sister Rosetta Tharpe and Gene Autry as well as newsreel clips from wartime presidents Harry Truman and Dwight D. Eisenhower, Gen. Douglas MacArthur and others.

It was published by Bear Family Records, the independent German label that was also behind Keesing’s previous project, “Next Stop is Vietnam: The War on Record, 1961-2008,” which was released in 2010 and generated 13 CDs.

The music on “Battleground Korea” — a mix of blues, swing, jazz, country and early rock ‘n’ roll — is largely arranged in chronological order around four themes labeled: Going to War Again, Somewhere in Korea, On the Homefront and Peace and its Legacies.

A soldier cues up a record for the Far East Network in Japan in 1952, the second year of the Korean War.
COURTESY OF BEAR FAMILY RECORDS

The companion book, which is laid out like a scrapbook, is filled with photos that include iconic images of Marilyn Monroe’s 1954 USO tour. It also contains lyrics, historical summaries and detailed write-ups about the songs and artists.

“I think of music as opening doors, maybe opening minds,” Keesing told Stars and Stripes during a visit to Seoul. “I have found in many years of teaching that students are willing to sit through something that has music. It is a different way of reaching them.”

The anthology starts with songs about men being drafted and sent back into battle overseas just a few years after World War II and reflects the murkiness of a conflict that was not technically declared a war but rather a police action or a United Nations intervention. Instead of a clear victory, the fighting ended with a truce after the adversaries failed to reach a peace treaty.

“Without a Pearl Harbor-like event or Hitlerian villain, songs could not rally the country around a cause, a reason to volunteer for military service or other war-related work,” the book says.

Keesing chose songs to portray the complexity of the war, which killed more than 36,000 American troops as well as hundreds of thousands of Koreans and Chinese. The history comes in snippets that provide just enough context to understand the real star of the anthology – the music, which may stir memories good and bad for military veterans and provide an entertaining lesson for students of the conflict.

“Well I just got home and I got to go back again,” sang the Four Barons in 1950, echoing a theme that’s just as relevant in modern times as many soldiers have faced multiple deployments in Iraq and Afghanistan.

“Goodbye Maria, I’m off to Korea,” rhymes Vince Mondi in a 1951 song, adding the purpose is “to win another fight for liberty.”

Other selections focus on prisoners of war and orphaned Korean children as well as tearjerkers about those left behind, such as “Dear Little Girls” and “Daddy’s Last Letter,” based on a letter from Pfc. John J. McCormick to his daughters before his death early in the war.

Relationships were another popular theme. “A Dear John Letter,” a 1953 song by Jean Shepard with recitation by Ferlin Husky, was “the only true hit to emerge from four years of songs about Korea,” according to the anthology. It inspired response songs such as “John’s Reply” and “Dear Joan.”

The music is punctuated by crackling radio soundbites from public announcements and news items, including the farewell address by Gen. Douglas MacArthur in which he famously said, “Old soldiers never die they just fade away,” after he was relieved of duty by Truman. Those words inspired the title of a 1951 song by Gene Autry and a breakup song called “Fade Away, Baby,” which apparently was originally titled “Do the MacArthur Baby” by Ray Snead.

Missing from the anthology is “Suicide Is Painless,” the iconic theme song from “M*A*S*H,” a popular TV show about a group of medics in the war. However, the book opens with a quote from one of the main characters, Capt. Hawkeye Pierce, who was played by Alan Alda.