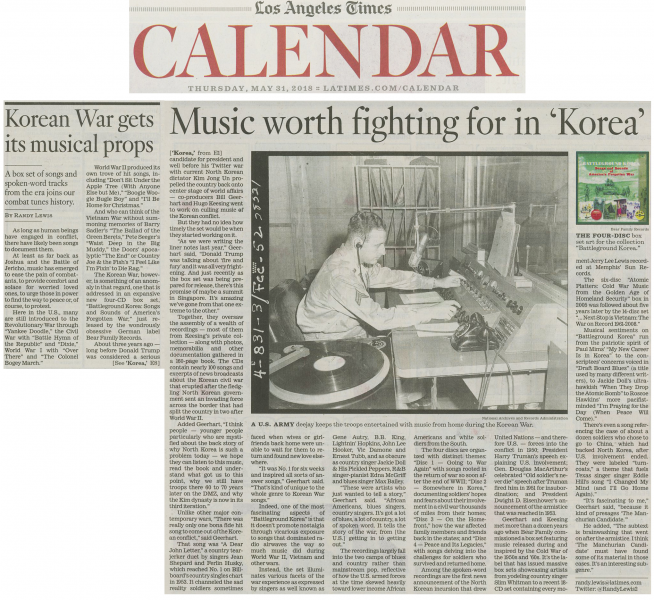 THURSDAY, MAY 31, 2018 :: LATIMES.COM/CALENDAR
Korean War gets Music worth fighting for in 'Korea' its musical props
A box set of songs and spoken-word tracks from the era joins our combat tunes history.
BY RANDY LEWIS

As long as human beings have engaged in conflict, there have likely been songs to document them. At least as far back as Joshua and the Battle of Jericho, music has emerged to ease the pain of combatants, to provide comfort and solace for worried loved ones, to urge those in power to find the way to peace or, of course, to protest. Here in the U.S., many are still introduced to the Revolutionary War through "Yankee Doodle," the Civil War with "Battle Hymn of the Republic" and "Dixie," World War I with "Over There" and "The Colonel Bogey March."

World War II produced its own trove of hit songs, including "Don't Sit Under the Apple Tree (With Anyone Else but Me)," "Boogie Woogie Bugle Boy" and "I'll Be Home for Christmas." And who can think of the Vietnam War without summoning memories of Barry Sadler's "The Ballad of the Green Berets," Pete Seeger's "Waist Deep in the Big Muddy," the Doors' apocalyptic "The End" or Country Joe & the Fish's "I Feel Like I'm Fixin' to Die Rag." The Korean War, however, is something of an anomaly in that regard, one that is addressed in an expansive new four-CD box set, "Battleground Korea: Songs and Sounds of America's Forgotten War," just released by the wondrously obsessive German label Bear Family Records. About three years ago —long before Donald Trump was considered a serious candidate for president and well before his Twitter war with current North Korean dictator Kim Jong Un propelled the country back onto center stage of world affairs — coproducers Bill Geerhart and Hugo Keesing went to work on culling music of the Korean conflict.

But they had no idea how timely the set would be when they started working on it. "As we were writing the liner notes last year," Geerhart said, "Donald Trump was talking about Tire and fury' and it was all very frightening. And just recently as the box set was being prepared for release, there's this promise of maybe a summit in Singapore. It's amazing we've gone from that one extreme to the other." Together, they oversaw the assembly of a wealth of recordings — most of them from Keesing's private collection — along with photos, memorabilia and other documentation gathered in a 160-page book. The CDs contain nearly 100 songs and excerpts of news broadcasts about the Korean civil war that erupted after the fledgling North Korean government sent an invading force across the border that had split the country in two after World War II.

Added Geerhart, "I think people — younger people particularly who are mystified about the back story of why North Korea is such a problem today — we hope they can listen to this music, read the book and understand what got us to this point, why we still have troops there 60 to 70 years later on the DMZ, and why the Kim dynasty is now in its third iteration." Unlike other major contemporary wars, "There was really only one bona fide hit song to come out of the Korean conflict," said Geerhart. That song was "A Dear John Letter," a country tearjerker duet by singers Jean Shepard and Ferlin Husky, which reached No. 1 on Billboard's country singles chart in 1953. It channeled the sad reality soldiers sometimes faced when wives or girlfriends back home were unable to wait for them to return and found new love elsewhere. "It was No. 1 for six weeks and inspired all sorts of answer songs," Geerhart said. "That's kind of unique to the whole genre to Korean War songs." Indeed, one of the most fascinating aspects of "Battleground Korea" is that it doesn't promote nostalgia through vicarious exposure to songs that dominated radio airwaves the way so much music did during World War II, Vietnam and other wars. Instead, the set illuminates various facets of the war experience as expressed by singers as well known as

Gene Autry, B.B. King, Lightnin' Hopkins, John Lee Hooker, Vic Damone and Ernest Tubb, and as obscure as country singer Jackie Doll & His Pickled Peppers, R&B singer-pianist Edna McGriff and blues singer Max Bailey. "These were artists who just wanted to tell a story," Geerhart said. "African Americans, blues singers, country singers. It's got a lot of blues, a lot of country, a lot of spoken word. It tells the story of the war, from [the U.S.] getting in to getting out." The recordings largely fall into the two camps of blues and country rather than mainstream pop, reflective of how the U.S. armed forces at the time skewed heavily toward lower income African Americans and white soldiers from the South.

The four discs are organized with distinct themes: "Disc 1 — Going to War Again" with songs rooted in the return of war so soon after the end of WWII; "Disc 2 — Somewhere in Korea," documenting soldiers' hopes and fears about their involvement in a civil war thousands of miles from their homes; "Disc 3 — On the Homefront," how the war affected family members and friends back in the states; and "Disc 4 — Peace and Its Legacies," with songs delving into the challenges for soldiers who survived and returned home. Among the spoken-word recordings are the first news announcement of the North Korean incursion that drew United Nations — and therefore U.S. — forces into the conflict in 1950; President Harry Truman's speech explaining U.S. involvement; Gen. Douglas MacArthur's celebrated "Old soldier's never die" speech after Truman fired him in 1951 for insubordination; and President Dwight D. Eisenhower's announcement of the armistice that was reached in 1953. Geerhart and Keesing met more than a dozen years ago when Bear Family commissioned a box set featuring music released during and inspired by the Cold War of the 1950s and '60s. It's the label that has issued massive box sets showcasing artists from yodeling country singer Slim Whitman to a recent 18-CD set containing every moment Jerry Lee Lewis recorded at Memphis' Sun Records.

The six-disc "Atomic Platters: Cold War Music from the Golden Age of Homeland Security" box in 2005 was followed about five years later by the 14-disc set "... Next Stop is Vietnam: The War on Record 1961-2008." Musical sentiments on "Battleground Korea" run from the patriotic spirit of Paul Mims' "My New Career Is in Korea" to the conscriptees' concerns voiced in "Draft Board Blues" (a title used by many different writers), to Jackie Doll's ultra-hawkish "When They Drop the Atomic Bomb" to Roscoe Hawkins' more pacifist-minded "I'm Praying for the Day (When Peace Will Come)."

There's even a song referencing the case of about a dozen soldiers who chose to go to China, which had backed North Korea, after U.S. involvement ended. They were labeled "turncoats," a theme that fuels Texas singer singer Eddie Hill's song "I Changed My Mind (and I'll Go Home Again)." "It's fascinating to me," Geerhart said, "because it kind of presages 'The Manchurian Candidate.- He added, "The subtext is brainwashing that went on after the armistice. I think `The Manchurian Candidate' must have found some of its material in those cases. It's an interesting subgenre."
[email protected] Twitter: @RandyLewis2