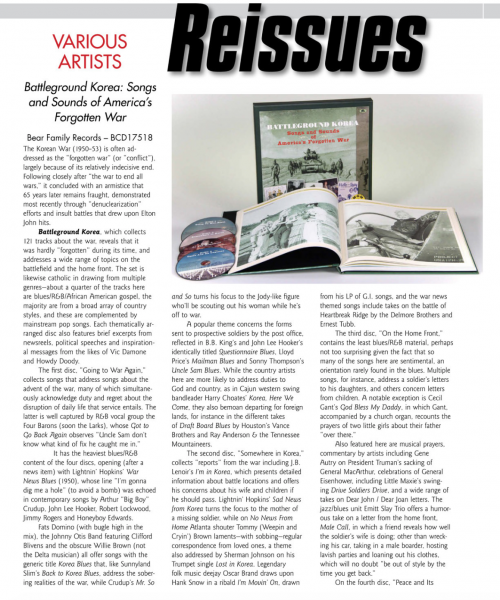 VARIOUS ARTISTS Battleground Korea: Songs and Sounds of America's Forgotten War Bear Family Records - BCD1 751 8 The Korean War (1950-53) is often ad-dressed as the "forgotten war" (or "conflict"). largely because of its relatively indecisive end. Following closely after the war to end all wars." it concluded with an armistice that 65 years later remains fraught. demonstrated most recently through "denuclearization" efforts and insult battles that drew upon Elton John hits. Battleground Korea. which collects 121 tracks about the war, reveals that it was hardly "forgotten" during its time, and addresses a wide range of topics on the battlefield and the home front. The set is likewise catholic in drawing from multiple genres—about a quarter of the tracks here are blues/R&B/African American gospel. the majority are from a broad array of country styles, and these are complemented by mainstream pop songs. Each thematically ar-ranged disc also features brief excerpts from newsreels. political speeches and inspiration-al messages from the likes of Vic Damone and Howdy Doody. The first disc. "Going to War Again," collects songs that address songs about the advent of the war. many of which simultane-ously acknowledge duty and regret about the disruption of daily life that service entails. The latter is well captured by R&B vocal group the Four Barons (soon the Larks). whose Got to Go Back Again observes "Uncle Sam don't know what kind of fix he caught me in." It has the heaviest blues/R&B content of the four discs, opening (after a news item) with Lightnin' Hopkins' War News Blues (1950). whose line "I'm gonna dig me a hole" (to avoid a bomb) was echoed in contemporary songs by Arthur "Big Boy" Crudup. John Lee Hooker, Robert Lockwood. Jimmy Rogers and Honeyboy Edwards. Fats Domino (with bugle high in the mix). the Johnny Otis Band featuring Clifford Blivens and the obscure Willie Brown (not the Delta musician) all offer songs with the generic title Korea Blues that, like Sunnyland Slim's Back to Korea Blues. address the sober-ing realities of the war, while Crudup's Mr. So
(ISSUES

Songs and Sounds of Anterfoa's Forgotten War and So turns his focus to the Jody-like figure who'll be scouting out his woman while he's off to war. A popular theme concerns the forms sent to prospective soldiers by the post office. reflected in B.B. King's and John Lee Hooker's identically titled Questionnaire Blues. Lloyd Price's Mailman Blues and Sonny Thompson's Uncle Sam Blues. While the country artists here are more likely to address duties to God and country. as in Cajun western swing bandleader Harry Choates' Korea. Here We Come. they also bemoan departing for foreign lands. for instance in the different takes of Draft Board Blues by Houston's Vance Brothers and Ray Anderson & the Tennessee Mountaineers. The second disc. "Somewhere in Korea." collects "reports" from the war including J.B. Lenoir's I'm in Korea, which presents detailed information about battle locations and offers his concerns about his wife and children if he should pass. Lightnin' Hopkins' Sad News from Korea turns the focus to the mother of a missing soldier. while on No News From Home Atlanta shouter Tommy (Weepin and Cryin') Brown laments—with sobbing—regular correspondence from loved ones. a theme also addressed by Sherman Johnson on his Trumpet single Lost in Korea. Legendary folk music deejay Oscar Brand draws upon Hank Snow in a ribald I'm Mouin' On. drawn

from his LP of G.I. songs, and the war news themed songs include takes on the battle of Heartbreak Ridge by the Delmore Brothers and Ernest Tubb. The third disc. "On the Home Front." contains the least blueslR&B material, perhaps not too surprising given the fact that so many of the songs here are sentimental, an orientation rarely found in the blues. Multiple songs. for instance, address a soldier's letters to his daughters. and others concern letters from children. A notable exception is Cecil Gant's God Bless My Daddy, in which Gant. accompanied by a church organ, recounts the prayers of two little girls about their father "over there." Also featured here are musical prayers. commentary by artists including Gene Autry on President Truman's sacking of General MacArthur. celebrations of General Eisenhower. including Little Maxie's swing-ing Drive Soldiers Drive. and a wide range of takes on Dear John / Dear Joan letters. The jazz/blues unit Emitt Slay Trio offers a humor-ous take on a letter from the home front. Male Call. in which a friend reveals how well the soldier's wife is doing: other than wreck-ing his car, taking in a male boarder, hosting lavish parties and loaning out his clothes. which will no doubt "be out of style by the time you get back." On the fourth disc. "Peace and Its

Legacies." Lightnin' announces The War Is Over, as does Crudup on a similarly titled track, while Sister Rosetta Tharpe and her shimmering guitar work celebrate that There's Peace in Korea. which was recorded the day the armistice was announced. Texan Soldier Boy Houston announces his plans after Leavin' Korea in a coun-try blues mode. Dell St. John. fronting the King Perry Orchestra. celebrates the return of her man in the rollicking, sax-driven jump blues Welcome Home Baby. while the duet Back From Korea finds Rose Brown and Jimmie Harris (backed by "Bubbles and His Band") trading lines about the potential problems of reconciling a relationship after a long absence. On the slow tempo No More Black Nights Dave Bartholomew plays off the earlier Charles Brown hit Black Night, which featured the line "Brother's in Korea." while Jimmy Witherspoon's Back Home borrows some lines and the overall tone from Five Long Years. I've said relatively little here about the majority of the tracks on the set. which will be pleasing to fans who are interested in the broader social context of the Korean War. as well as to those who are fans of vintage country music and bluegrass—there are tracks here from heavyweights includ-ing the Louvin Brothers.

Jean Shepard. Red Foley. Merle Travis (Re-Enlistment Blues), Marvin Rainwater. Hank Penny and Dick Curless (who recorded the ballad China Nights while serving in Korea, where he deejayed on the Armed Forces Network as the "Rice Paddy Ranger") and the bluegrass groups led by Jim & Jesse (Purple Heart). and Don Reno and Red Smiley. The 160-page. LP-sized booklet is remarkably detailed in terms of imagery and text—there are extended profiles of each song/ artist. transcriptions of each track. detailed essays on the progression of the war. sections of photos on topics including American art-ists (including Marilyn Monroe) visiting the troops. North Korean propaganda and films about the war. Author Hugo Keesing and Cold War historian Bill Geerhart draw upon the work of Guido van Rijn. whose book The Truman and Eisenhower Blues covers a lot of this ground. but have taken the analysis of the musical legacy of the Korean War to another level. This set follows Keesing's impressive work with the 13-disc Bear Family set Next Stop Is Vietnam. and one hopes that another thematic set is on the way. —Scott Barretta