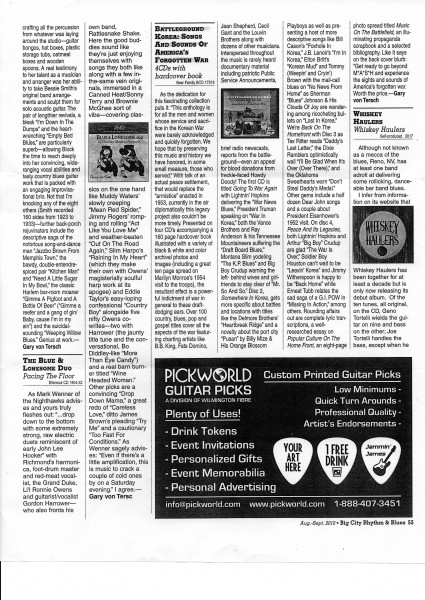 BATTLEGROUND KOREA: SONGS AND SOUNDS OF AMERICA'S FORGOTTEN WAR 4CDs with hardcover book Bear Family BCD 17518
As the dedication for this fascinating collection puts it: "This anthology is for all the men and women whose service and sacri-fice in the Korean War were barely acknowledged and quickly forgotten. We hope that by preserving this music and history we have honored, in some small measure, those who served! With talk of an actual peace settlement, that would replace the "armistice" enacted in 1953, currently in the air diplomatically this legacy project also couldn't be more timely. Presented on four CD's accompanying a 160 page hardcover book illustrated with a variety of black & white and color archival photos and images (including a great ten page spread on Marilyn Monroe's 1954 visit to the troops), the resultant effect is a power-ful indictment of war in general to these draft-dodging ears. Over 100 country, blues, pop and gospel titles cover all the aspects of the war featur-ing charting artists like B.B. King, Fats Domino,
Jean Shepherd, Cecil Gant and the Louvin Brothers along with dozens of other musicians. Interspersed throughout the music is rarely heard documentary material including patriotic Public Service Announcements,

brief radio newscasts, reports from the battle-ground—even an appeal for blood donations from freckle-faced Howdy Doody! The first CD is titled Going To War Again with Lightnin' Hopkins delivering the "War News Blues: President Truman speaking on "War In Korea," both the Vance Brothers and Ray Anderson & his Tennessee Mountaineers suffering the "Draft Board Blues: Montana Slim yodeling "The K.P. Blues" and Big Boy Crudup warning the left- behind wives and girl-friends to stay clear of "Mr. So And So." Disc 2, Somewhere In Korea, gets more specific about battles and locations with titles like the Delmore Brothers' "Heartbreak Ridge" and a novelty about the port city "Pusan" by Billy Mize & His Orange Blossom
Playboys as well as pre-senting a host of more descriptive songs like Bill Cason's "Foxhole In Korea: J.B. Lenoir's "I'm In Korea," Elton Brits "Korean Mud" and Tommy (Weepin' and Cryin') Brown with the mail-call blues on "No News From Home" as Sherman "Blues" Johnson & His Clouds Of Joy are wander-ing among ricocheting bul-lets on "Lost In Korea." We're Back On The Homefront with Disc 3 as Tex Ritter reads "Daddy's Last Letter: the Dixie Ramblers optimistically wail "I'll Be Glad When Ifs Over (Over There)," and the Oklahoma Sweethearts warn "Don't Steal Daddy's Medal." Other gems include a half dozen Dear John songs and a couple about President Eisenhower's 1952 visit. On disc 4, Peace And Its Legacies, both Lightnin' Hopkins and Arthur "Big Boy" Crudup are glad "The War Is Over: Soldier Boy Houston can't wait to be "Leavin' Korea" and Jimmy Witherspoon is happy to be "Back Home" while Ernest Tubb relates the sad saga of a G.I. POW in "Missing In Action: among others. Rounding affairs out are complete lyric tran-scriptions, a well-researched essay on Popular Cufture On The Home Front, an eight-page
photo spread titled Music On The Battlefield, an illu-minating propaganda scrapbook and a selected bibliography. Like it says on the back cover blurb: "Get ready to go beyond M*A"S*H and experience the sights and sounds of America's forgotten war. Worth the price.—Gary von Tersch