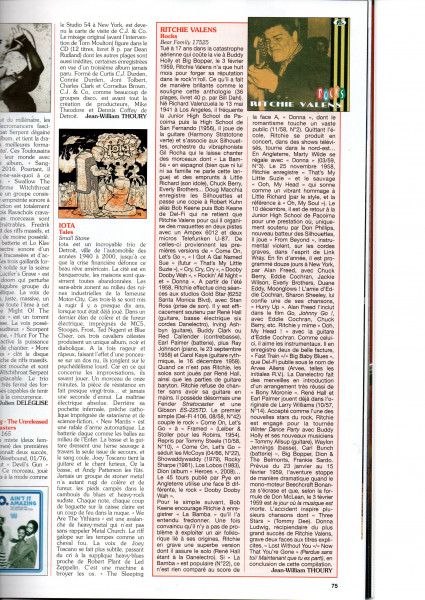 RITCHIE VALENS Rocks Bear Family 17525 Killed at the age of 17 in the air crash that killed Buddy Holly and Big Bopper on February 3, 1959, Ritchie Valens had only eight months to build his reputation in rock'n' roll. This he has done brilliantly, as this anthology highlights (36 tracks, booklet 40 p. by Bill Dahl). Born Richard Valenzuela on May 13, 1941 in Los Angeles, he attended the Junior High School in Pa-coima and then the High School in San Fernando (1956), he played the guitar (Harmony Stratotone verte) and joined the Silhouet-tes, the orchestra of vibraphonist Gil Rocha who let him sing songs including "La Bam-ba" in Spanish (although neither he nor his family spoke that language) and loans from Little Richard (his idol), Chuck Berry, Everly Brothers... Doug Macchia recorded the Silhouettes and gave a copy to Robert Kuhn alias Bob Keene then Bob Keane from Del-Fi who only retained Ritchie Valens for whom he organized two-track models with an Ampex 6012 and two Telefunken U-87 microphones.

Once convinced that there is no problem in exploiting a folk tune related to his origins, Ritchie engraves a superb version of it for which he is the soloist (René Hall being at the Danelectro). If "La Bamba" is popular (N°22), it is nothing compared to the score on side A, "Donna", whose romanticism reaches a wide audience (11/58, N°2). Leaving school, Ritchie performed in concert, in TV shows, toured in the northeast... In England, Marty Wilde enjoyed himself with "Donna" (03/59, N°3). On November 25, 1958, Ritchie recorded "That's My Little Suzie" and the wild "Ooh, My Head" which sounds like a vibrant tribute to Little Richard (by the style, and the reference to "Oh, My Soul"). On December 10, he returned to Pacoima's Junior High School for a performance where, only supported by Don Phillips, the new drummer of the Silhouettes, he played "From Beyond", a violent instrument, on the lower strings, in the spirit of Link Wray. At the end of the year, he is scheduled for twelve days in New York, by Alan Freed, with Chuck Berry, Eddie Cochran, Jackie Wilson, Everly Brothers, Duane Eddy, Moonglows !

Ed-die Cochran's friend, Sharon Sheeley, confided one of her songs, "Hurry Up", to her. Alan Freed includes him in the movie Go, Johnny Go with Eddie Cochran, Chuck Berry, etc. Ritchie y mime "0oh, My Head ! "with Eddie Cochran's guitar. Like this one, he likes instrumentals. He recorded two of them, "Fast Train "1" Big Baby Blues, which Del-Fi published under the name Arvee Allens (Arvee, like the initials R.V.). The Danelectro does wonders in introducing a very successful arrangement of "Bony Moronie". René Hall and Earl Palmer already play in Larry Williams' o-riginale (10/57, N°14). Accepted as one of the new rock stars, Ritchie is hired for the Winter Dance Party tour with Buddy Holly and her new musicians - Tommy Allsup (guitar), Waylon Jennings (bass), Carl Bunch (drums) -, Big Bopper, Dion & The Belmonts, Frankie Sardo. Scheduled from January 23 to February 15, 1959, the adventure stopped dramatically when the single-engine Beechcraft Bonan-za crashed and, according to Don McLean's formule, February 3, 1959 was the day the music died. The accident inspired several songs including "Three Stars" (Tommy Dee).

Donna Ludwig, recipient of Ritchie Valens' greatest hit, has two sides to the titles explained, "Lost Without You"/"Now That You're Gone