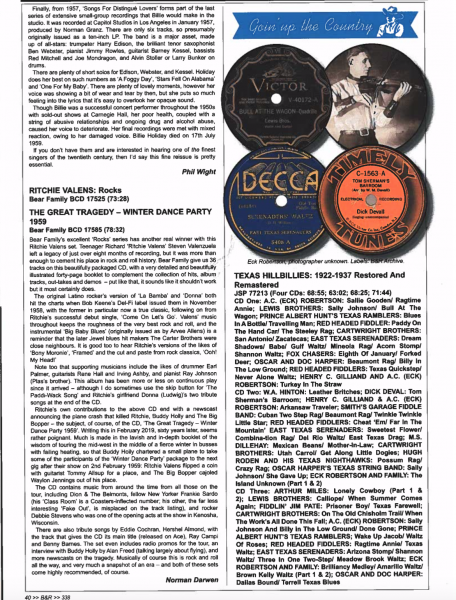 RITCHIE VALENS: Rocks Bear Family BCD 17525 (73:28)
THE GREAT TRAGEDY — WINTER DANCE PARTY 1959 Bear Family BCD 17585 (78:32) Bear Family's excellent 'Rocks' series has another real winner with this Ritchie Valens set. Teenager Richard 'Ritchie Valens' Steven Valenzuela left a legacy of just over eight months of recording, but it was more than enough to cement his place in rock and roll history Bear Family give us 36 tracks on this beautifully packaged CD, with a very detailed and beautifully illustrated forty-page booklet to complement the collection of hits, album tracks, out-takes and demos — put like that, it sounds like it shouldn t work but it most certainly does. The original Latino rocker's version of 'La Bamba' and 'Donna' both hit the charts when Bob Keene's Del-Fi label issued them in November 1958, with the former in particular now a true classic, following on from Ritchie's successful debut single, 'Come On Let's Go'. Valens' music throughout keeps the roughness of the very best rock and roll, and the instrumental 'Big Baby Blues' (originally issued as by Arvee Aliens) is a reminder that the later Jewel blues hit makers The Carter Brothers were close neighbours. It is good too to hear Ritchie's versions of the likes of 'Bony Moronie', 'Framed' and the cut and paste from rock classics. 'Ooh! My Head!' Note too that supporting musicians include the .ikes of drummer Earl Palmer, guitarists Rene Hall and Irving Ashby, and pianist Ray Johnson (Plas's brother). This album has been more or less on continuous play since it arrived — although I do sometimes use the skip button for 'The Paddi-Wack Song' and Ritchie's girlfriend Donna (Ludwig) s two tribute songs at the end of the CD. Ritchie's own contributions to the above CD end with a newscast announcing the plane crash that killed Ritchie, Buddy Holly and The Big Bopper — the subject, of course, of the CD, 'The Great Tragedy — W nter Dance Party 1959'. Writing this in February 2019, sixty years later, seems rather poignant. Much is made in the lavish and in-depth booklet of the wisdom of touring the mid-west in the middle of a fierce winter in busses with failing heating, so that Buddy Holly chartered a small plane to take some of the participants of the 'Winter Dance Party' package to the next gig after their show on 2nd February 1959: Ritch e Valens flipped a coin with guitarist Tommy Alisup for a place, and The Big Bopper cajoled Waylon Jennings out of his place. The CD contains music from around the time from all those on the tour, including Dion & The Belmonts, fellow New Yorker Frankie Sardo (his 'Class Room' is a Coasters-inflected number h s other, the far less interesting 'Fake Out', is misplaced on the track listing), and rocker Debbie Stevens who was one of the opening acts at the show in Kenosha, Wisconsin. There are also tribute songs by Eddie Cochran, Hershel Almond, with the track that gives the CD its main title (released on Ace), Ray Camp and Benny Barnes. The set even includes radio promos for the tour, an interview with Buddy Holly by Alan Freed (talking largely about flying and more newscasts on the tragedy. Musically of course th s s rock and roll all the way, and very much a snapshot of an era and both of these sets come highly recommended, of course.