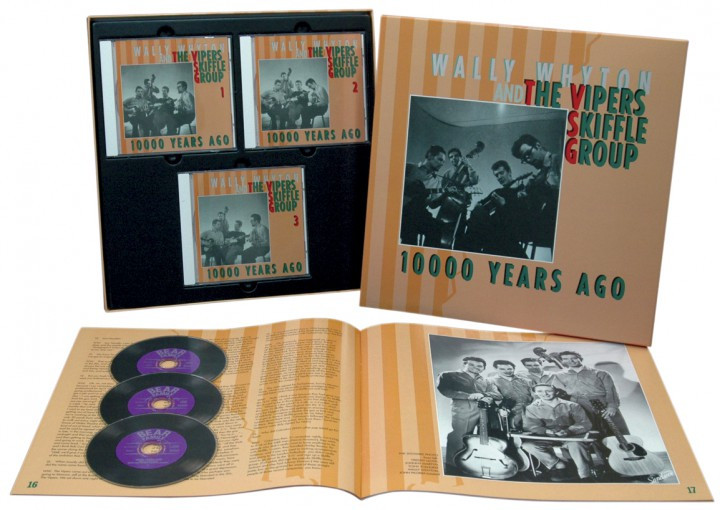 An emotive word for anyone living in Britain in the ‘50s for it brings with it images of home-made instruments, church halls and home-grown heroes like Lonnie Donegan, Ken Colyer, The Vipers, Chas McDevitt, Johnny Duncan and many others.

Ken Colyer pioneered the term in England by describing a small ensemble within his jazz band as a 'Skiffle Group', but it was Donegan's Rock Island Line, a surprise hit in 1955 that really started it all.

The realization that almost any group of teenagers could form their own skiffle group and produce a reasonable imitation of Donegan's effort soon resulted in a shortage of skiffle's component parts; guitars; washboards and tea-chests were soon being rationed by shopkeepers. Every record company rushed to sign their own skiffle groups and for a couple of years skiffle was the biggest thing since Johnnie Ray.

Skiffle is often forgotten, due to the success of its sister, rock 'n' roll, but many big names from the ‘50s, ‘60s and beyond cut their musical teeth in skiffle groups, including Lennon and McCartney in Liverpool's Quarrymen, Cliff Richard in the Dick Teague Skiffle Group and the Who's Roger Daltry, who got started with the Sulgrave Rebels from West London.
John Beecher

Like its near-relation, Rock 'n' Roll, Skiffle came like a breath of fresh air to the British pop music scene in the 1950s. Drawing inspiration mostly from folk, country and blues music, the commercial skiffle groups soon became role-models for every teenager in the country, and washboards, tea-chests and guitars were soon in short supply. Some skifflers were purists, like Ken Colyer, some, like the Vipers, were enthusiastic amateurs when they first stepped into a studio, but the Chas McDevitt group was popular in style, professional in approach and almost scholarly in their knowledge of the roots music that made up their repertoire.

This album is the Real Thing

Despite being signed to Oriole, one of the smallest labels in the business, the McDevitt group met with almost instant success in the UK and USA with their first outing, Freight Train. They followed this hit with a succession (if not always successful) string of singles, which nearly always showed originality, even in their treatment of the old traditional songs. For the first time on one album here are all of the Chas McDevitt Skiffle Group's recordings for Oriole, featuring both Nancy Whiskey and Shirley Douglas. Also included are several recordings made for the Oriole subsidiary, Embassy (which sold 'two hits for less than the price of one' in Woolworths stores) on which you will hear Chas and the group 'cover' their own hit record together with those by Lonnie Donegan and the Vipers. Whether you're planning a 'Skiffle Party' or some serious musical research on the Roots of British Rock, this album is the Real Thing!

LONNIE DONEGAN MORE THAN PYE IN THE SKY (8 CDs)

Skiffle was a phenomenon; Lonnie Donegan was a phenomenon. Many thought the two were the same thing, until rock ‘n’ roll killed off skiffle – and Lonnie became a fixture in the British music scene. Here is the complete story of Lonnie on Decca and Pye, from 1954 to 1966. Demos from Lonnie’s personal collection and radio broadcasts round out the 209 songs on this set.

These were the records that changed the face of music in England. From the groundbreaking Rock Island Line to the bandwagon-jumping World Cup Willie, all Donegan's hits and misses for Decca and Pye are here, together with rare and previously unissued tracks! Donegan may have been skiffle's great star but he graduated to make some fine pop and country recordings, all of which are included here.

The box also contains a detailed discography, biography, dozens of fine pictures and memorabilia and an indepth interview with the man himself.

Despite having just a few chart entries in the ‘50s with Last Train To San Fernando, Footprints In The Snow and Blue Blue Heartaches, Duncan built up a tremendous following.

His later work was more country than skiffle but he retained a style of his own and this set is a long-overdue salute to the man and his music. It contains all the original recordings from his sessions for UK Columbia, Pye, Lucky and Decca.

A detailed discography and biography with many previously unseen pictures is also included.

Here are all the Vipers’ commercial recordings from their early hits for Parlophone, Ain't You Glad, Worried Man, Don't You Rock Me Daddy-O, through their 'Coffee Bar Session' album to their later and lesser-known recordings for Pye.

Also included are solo performances from Wally Whyton and rarities from Hank Marvin and Jet Harris during their short spell with the Vipers. Rare pictures, a detailed biography and discography complete the set.